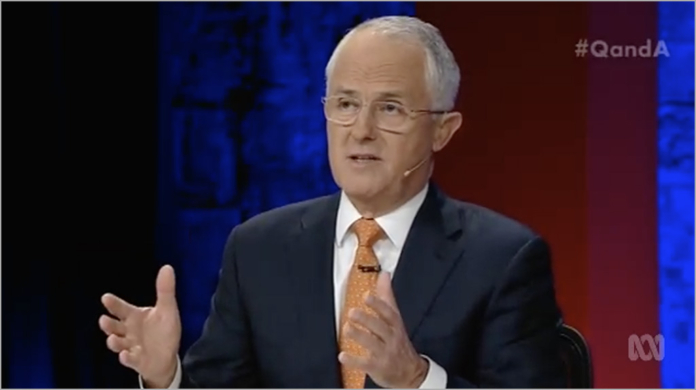 news Prime Minister Malcolm Turnbull appears to have misled the ABC’s Q&A program about key facts regarding the National Broadband Network project, repeating a set of common misconceptions about the initiative in response to a question on air last night.

On the ABC’s Q&A program last night (we recommend you click here for the full show), an audience member asked Turnbull the following question: “Prime Minister, the NBN your Government has implemented, while being cheaper, is proven to be outdated and much slower than the Labor Government’s NBN scheme.”

“Countries like the UK, New Zealand and Germany are already replacing these parts of their networks with fibre to the premises instead. How will you ensure the NBN will be future proofed so taxpayers do not end up paying twice to rebuild the NBN infrastructure, much like the UK is now?”

The question was followed with applause from the audience.

Turnbull’s central argument was that the NBN project had “completely failed” under the previous Rudd/Gillard Labor administration.

“It had ground to a halt in many parts of Australia,” the Prime Minister said. “They had succeeded in connecting to the NBN a little over 50,000 premises. We connected more than 60,000 last month. The project was was a complete failure.”

Turnbull also took aim at those who claimed they required higher speeds on the NBN.

The reality, Turnbull said, was that the NBN under the Coalition was meeting the demad of its customers.

However, there is clear evidence that a number of Turnbull’s statements are inaccurate or strongly contested; or that the Prime Minister left important context out of his statements.

For example, Turnbull’s statements with respect to the NBN’s progress neglected to include the fact that the NBN project was always planned to ‘ramp up’ as the years went on.

It’s true that the NBN had been delayed under Labor, due primarily to difficulties with the contracting model and unexpected issues with asbestos in Telstra’s ducting infrastructure.

However, in addition, several years of detailed planning and contract negotiations needed to be undertaken before the NBN company could begin deploying the NBN at a national scale.

Almost all of the rollout progress which the NBN has made under the Coalition has been using Labor’s initial Fibre to the Premises technology, courtesy of the fact that that planning work had already been undertaken before the Coalition came into power in September 2013. The successful launch of the NBN company’s satellite earlier this year can also be chalked up to Labor.

In comparison, the NBN company has made relatively little progress in deploying the rival technologies — Fibre to the Node and HFC cable — which the Coalition has imposed on the project. Its HFC cable rollout especially has only recently begun.

The Coalition and the NBN company itself (during the time that it has been under Coalition managment) have repeatedly stated that Australians did not want or need the gigabit speeds which FTTP can deliver, citing as evidence the fact that most NBN customers so far have taken up only slower speeds such as 12Mbps and 25Mbps.

However, technology figures such as Atlassian co-founder Mike Cannon-Brookes — one of Australia’s most successful technology entrepreneurs — and others have stated in public that gigabit speeds are essential for the nation’s long-term development. In addition, internationally telcos such as AT&T, Google, Verizon and more are talking up the need for such speeds.

Turnbull’s comments regarding Labor’s original FTTP plan costing $30 billion more and taking six to eight years longer are based on a so-called “counterfactual” which the NBN company produced at Turnbull’s behest, in an attempt to criticise the idea of returning to Labor’s FTTP model.

However, the figures are strongly disputed, with the NBN company itself having produced a separate set of estimates in its 2013 Strategic Review showing that a reworked version of Labor’s FTTP model could be delivered by 2023, and that it would, as the Coalition’s MTM model would, make a return on the Government’s investment — an eventual profit.

Turnbull also didn’t address the fact that the MTM model being implemented by the Coalition in the NBN project has significant long-term drawbacks.

It will leave up to two thirds of Australians stranded on legacy HFC cable and copper infrastructure that many believe will need to upgraded again within the next decade, in order to keep up with rapidly increasing bandwidth demands on fixed-line telecommunications networks.

The cost of these upgrades has not been factored into the Coalition’s NBN policy.

Turnbull’s comments also did not address Labor’s new NBN policy. Launched last week, the policy adopted some aspects of the Coalition’s model, such as its focus on HFC cable technology, but would also see the Fibre to the Node aspect of the Coalition’s policy dumped in favour of a return to the original FTTP model.

The Coalition has given a number of indications that it will not revise its NBN policy for this year’s Federal Election, choosing instead to focus on fixing mobile blackspots around the nation.

opinion/analysis
On last night’s episode of Q&A, Turnbull did nothing to address persistent criticism of the Coalition’s NBN policy. Neither did he address — at all — Labor’s reworked NBN vision.

Instead, what we got was a repeat of the standardised set of talking points which virtually every Coalition MP has been parroting about the NBN for the past two to three years.

I find this insulting, to say the least.

Turnbull is clearly aware that the NBN debate has moved on and that the country is now having a nuanced discussion of how the NBN project should proceed over the next decade, incorporating technologies such as HFC cable, FTTP and perhaps even new models such as Fibre to the Distribution Point.

The Prime Minister’s failure to address that debate in any way, shape of form shows his lack of respect for the public; and also his determination not to meaningfully engage on the matter of the NBN. The increasingly likelihood that the Coalition will not refine its NBN policy for the election reinforces that impression.

Image credit: Screenshot of the ABC’s Q&A program, believed to be covered under fair dealing