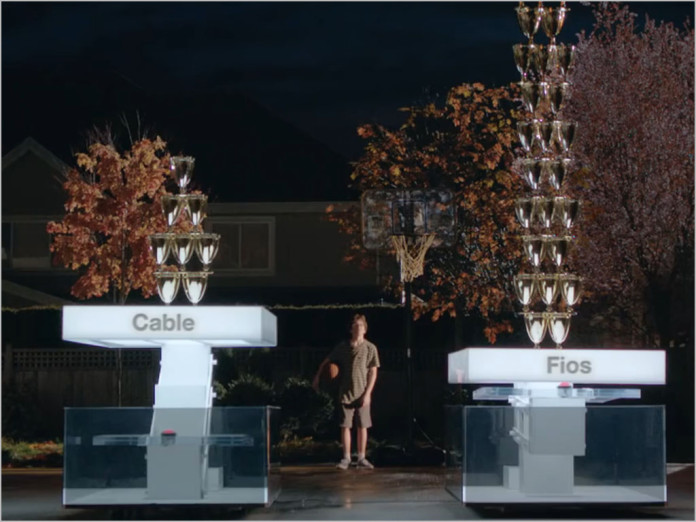 news One of the US telcos visited by the NBN management this month, Verizon, has deployed a new advertising campaign with the aim of ‘making it clear’ to Americans that “there is a difference” between the dominant HFC cable broadband service and Verizon’s own “superior” FTTP-based ‘Fios’ offering.

Like AT&T, Verizon is a predominantly US-based telco that emerged as one of of the largest players following the consolidation of the former ‘baby Bell’ group of telcos, operating both fixed-line and mobile networks in the country. Like its rivals, Verizon operates both fixed and mobile networks.

When it comes to fixed-line broadband, most US telcos are currently focused on upgrading traditional HFC cable or copper (ADSL) broadband networks.

This mimics the approach taken by the Coalition Federal Governments in Australia, which have shifted our own National Broadband Network project from the Fibre to the Premises model originally used by the previous Labor Government to a so-called ‘Multi-Technology Mix’ model incorporating the copper and HFC cable networks owned by Telstra and Optus.

However, in the US, Verizon has chosen to focus on deploying a mass-scale Fibre to the Premises network instead of using legacy networks for broadband. The company’s Fios network currently reaches about 20 million premises in more than a dozen states, and offers broadband speeds of up to 500Mbps.

Late last week, Verizon deployed a new advertising campaign in the US which explicitly focused on informing customers of the difference between the HFC cable and FTTP technologies. You can watch the company’s TV advertisement online.

“Verizon’s new TV spots for its Fios product make clear the difference between our 100 percent fiber optic network and plain old cable: fiber optics move at the speed of light,” the company said in a statement.

“Which is why, over the last ten years, Fios has received more awards for Internet speed and customer satisfaction than all cable networks combined. Specifically, 52 awards for Fios compared to seven for cable. Those awards include the #1 rating in PC Magazine’s Reader’s Choice Survey for Internet speed for 10 years running, and the J. D. Power Award for “Highest in Customer Satisfaction among Residential Internet Service Providers in the East Region” for three years in a row*. ”

“The new TV spots are intended to do one thing: make it clear to cable customers that there is a difference between Fios and cable,” said Tami Erwin, senior vice president and group president, Consumer and Mass Business Sales and Service.

“Our Fios network is based on superior fiber optic technology, which means only our customers enjoy upload speeds as fast as download speeds at a better price than cable can offer. On top of that, our Fios network has been recognized by the leading customer satisfaction surveys year after year. That’s something we’re very proud of.”

The new campaign comes as the NBN company has recently visited US telcos such as Verizon, Comcast, AT&T and Google to ascertain the direction of the US market.

The Financial Review newspaper reported last week that NBN chief executive Bill Morrow had led a delegation of NBN executives to the US to meet with those specific telcos.

However, Morrow returned with a very different message to the one which Verizon is using in its new advertising campaign.

The AFR reported that Morrow had said with respect to the Google FIber rollout — which also uses a FTTP architecture similar to Verizon’s Fios — that customers did not use the gigabit speeds it enabled yet, and that Google’s FTTP rollout was only done to force other telcos to conduct similar broadband upgrades.

It is not clear what message Verizon passed on to Morrow regarding its own Fios rollout.

Like the NBN company, fellow US giant AT&T is pursuing a mixed technology approach to its rollout, upgrading its copper infrastructure with Fibre to the Node-style hardware. However, AT&T has also been prompted by the Google and Verizon FTTP rollouts to follow suit with the technology.

For example, in April 2014 AT&T revealed it would deploy Fibre to the Premises infrastructure in 100 major US cities in the United States, delivering gigabit broadband speeds.