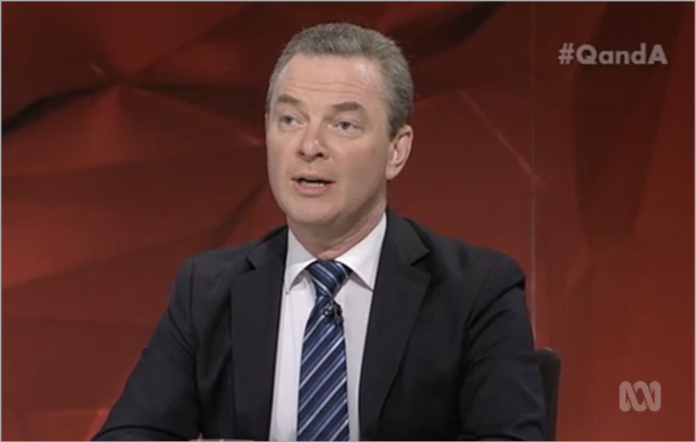 news Industry, Innovation and Science Minister Christopher Pyne appears to have inadvertently misled the ABC’s Q&A program about key facts regarding the National Broadband Network project, repeating a set of common misconceptions about the initiative on air last night.

On the ABC’s Q&A program last night (we recommend you click here for the full show), an audience member asked the following question: “Last week’s AFP raids have once again brought the NBN delays to the forefront, so given the current delays in the NBN roll out, the money paid to Telstra and the less desirable technical outcome of the hybrid copper solution, does the government regret the political decision it’s made not to persist with the original fibre to the premises roll-out?”

In response to the question of whether the Government regretted switching the NBN model, Pyne firstly responded: “Absolutely not”.

The Minister followed up with a number of statements about the NBN project.

“It was costing an absolute bomb,” said Pyne.

With regard to the Coalition’s Multi-Technology Mix model for the NBN, Pyne said: “This will cost $30 billion less, but it will be cheaper to consumers; it’ll be cheaper to the taxpayer; it’ll be delivered faster to the Australian consumer and at speeds that they want and need.”

However, there is clear evidence showing that a number of Pyne’s statements are inaccurate or strongly contested.

Labor’s original FTTP version of the NBN was slated to be delivered by 2021, not 2024 as Pyne claimed. Shortly after taking office, the Coalition conducted a Strategic Review into the NBN (PDF) which found that a reworked vision of Labor’s approach could be delivered by 2023.

Since that time — as founding NBN chief executive Mike Quigley said it would — the NBN company has also developed methods of radically speeding up its rollout of FTTP infrastructure. This is a phenomenon also seen in New Zealand, where the company’s major wholesale telco Chorus is also deploying FTTP.

This phenomenon is known as a ‘ramp-up’ and explains why it took the NBN company several years to get up to speed in deploying its network under Labor; a vast amount of initial planning needed to be done before it could commence its rollout.

In comparison, the NBN company has made relatively little progress in deploying the rival technologies — Fibre to the Node and HFC cable — which the Coalition has imposed on the project.

Contrary to Pyne’s comments, the NBN company and Labor had detailed financial projections for the original FTTP version of the NBN.

Almost all of the NBN company’s projections over time have shown that all versions of the NBN — Labor’s and the Coalition’s — would not, in fact, cost the Government anything, because each version would actually make a return on the Government’s investment of up to seven percent.

This means that the NBN project as a whole would be profitable — ensuring the Government’s original investment in the project would be returned, with interest.

That projected return on investment figure has actually sunk under the Coalition, because of less revenues achieved using the Coalition’s Fibre to the Node and HFC cable technologies than Labor’s original fibre vision, as well as higher than expected costs associated with this legacy infrastructure.

Retail costs to consumers in terms of actual NBN plans also currently appear to be the same under both models — Labor and the Coalition — with ISPs charging the same price for customers to access FTTN or FTTP services, despite the substantial differences between these technologies.

The Coalition and the NBN company itself (during the time that it has been under Coalition managment) have repeatedly stated that Australians did not want or need the gigabit speeds which FTTP can deliver, citing as evidence the fact that most NBN customers so far have taken up only slower speeds such as 12Mbps and 25Mbps.

However, technology figures such as Atlassian co-founder Mike Cannon-Brookes — one of Australia’s most successful technology entrepreneurs — and others have stated in public that gigabit speeds are essential for the nation’s long-term development. In addition, internationally telcos such as AT&T, Google, Verizon and more are talking up the need for such speeds.

On last night’s Q&A episode, the NBN discussion provoked laughter from the audience at several points — for example, after Pyne stated that there had not been a delay of in the NBN rollout under the Coalition, and again when Pyne stated that the Coalition’s NBN would deliver speeds that would allow Australians to “watch five full-length movies in the same household at the same time”.

Shadow Minister for Infrastructure, Transport and Tourism, Anthony Albanese, told the Q&A audience that the NBN, “of course, isn’t about movies — it’s about the economy”.

Albanese said the “fraudband” deployed by the Coalition was “double the cost” of what Malcolm Turnbull had promised it would be, and wasn’t delivering the promised speeds.

“I was the [Communications] Minister before the Election,” said Albanese. “He promised that in 2016, everyone in Tasmania would have the NBN in their home. If you’re watching this in Tasmania, next time your little device is buffering, blame Malcolm Turnbull.”

Albanese slammed the Coalition for having to purchase 1,800km of brand new copper to make its version of the NBN work, describing the cables as “19th century stuff”, and attacked the Government for the Australian Federal Police raids last week on Labor offices to track down NBN whistleblowers.

“This is information that every Australian has a right to know,” said Albanese. “It’s a disaster. That’s why you’re having to raid people.”

Image credit: ABC’s Q&A program, believed to be OK to use under fair dealing