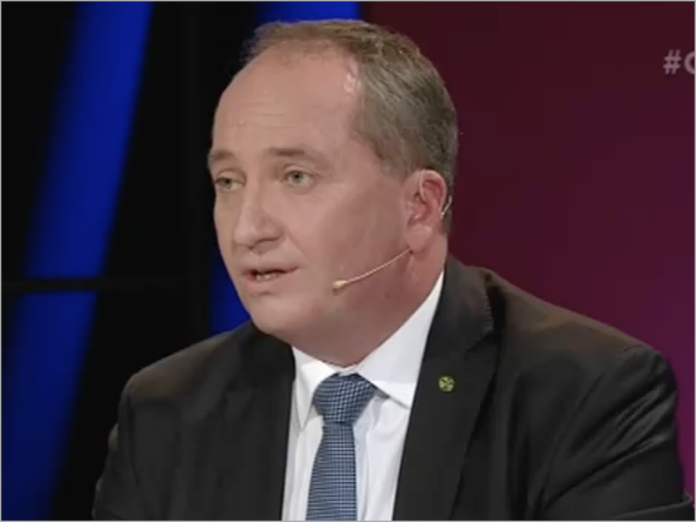 news Deputy Prime Minister Barnaby Joyce appears to have perpetuated a number of common misconceptions about the National Broadband Network in his appearance this week on the ABC’s Q&A program, including its cost, demand for high-speed broadband and its time to be deployed.

On the ABC’s Q&A program on Monday night this week, an audience member who lives with their family on a small farm 20km out of Tamworth told the panel that the area was “the telecommunications equivalent of the Third World”, because they couldn’t get TV or mobile reception and had a “damaged” fixed copper line that was unusable.

“We’re forced to use satellite internet, which, on a bad day, means we can’t actually access Gmail accounts,” they stated. Delimiter recommends readers click here to watch the full program. The transcript is also available.

The audience member told the panel that they would like the Government to “commit properly to a fibre to the premises – comprehensive NBN” that they believed would benefit the whole country.

In response, Deputy Prime Minister Barnaboy Joyce — whose seat of New England includes Tamworth — told the questioner that he didn’t believe that areas such as the one she lived in would ever have “exactly the same services as the CBD of Sydney”.

“It would just be not the truth to say we are going to be able to deliver that service to every regional section of Australia,” he said.

“We have to try and always do things within our means to repay the debt that we have and that, unfortunately, is the raw rule of economics, trying to do as much as we can to make sure we run a tight ship.”

Joyce said the best way to test what the public wanted from the NBN was “to see what they buy”. The Nationals MP said it was correct that a FTTP version of the NBN could deliver gigabit speeds, and that that was “an incredible service”. However, he said the NBN company hadn’t actually sold any of those services.

“Overwhelmingly, it’s the 25-megabit service that’s got 52% of the sales for where the NBN is available,” Joyce said. “So, we have to make sure it meets the market, that’s how it works.”

Joyce added that returning to Labor’s FTTP version of the NBN would cost the Government an extra $30 billion and take six to eight years longer to deploy than the Coalition’s Multi-Technology Mix version of the NBN.

However, unfortunately a number of statements made by Joyce were incorrect and reflect popular myths about the NBN project.

Labor’s original FTTP version of the NBN was slated to be delivered by 2021, not 2024 as Pyne claimed. Shortly after taking office, the Coalition conducted a Strategic Review into the NBN (PDF) which found that a reworked vision of Labor’s approach could be delivered by 2023.

Since that time — as founding NBN chief executive Mike Quigley said it would — the NBN company has also developed methods of radically speeding up its rollout of FTTP infrastructure. This is a phenomenon also seen in New Zealand, where the company’s major wholesale telco Chorus is also deploying FTTP.

This phenomenon is known as a ‘ramp-up’ and explains why it took the NBN company several years to get up to speed in deploying its network under Labor; a vast amount of initial planning needed to be done before it could commence its rollout.

In comparison, the NBN company has made relatively little progress in deploying the rival technologies — Fibre to the Node and HFC cable — which the Coalition has imposed on the project.

In terms of the cost of rolling out FTTP, almost all of the NBN company’s projections over time have shown that all versions of the NBN — Labor’s and the Coalition’s — would not, in fact, cost the Government anything, because each version would actually make a return on the Government’s investment of up to seven percent.

This means that the NBN project as a whole would be profitable — ensuring the Government’s original investment in the project would be returned, with interest.

That projected return on investment figure has actually sunk under the Coalition, because of less revenues achieved using the Coalition’s Fibre to the Node and HFC cable technologies than Labor’s original fibre vision, as well as higher than expected costs associated with this legacy infrastructure.

Joyce’s figures on both cost and rollout time appear to have been drawn from a so-called ‘counterfactual’ produced by the NBN company in mid-2015 at the request of the Coalition Government. The document purports to show that returning the NBN to an all-FTTP model could be completed by 2026-2028 and would require $20 to $30 billion more than the Coalition’s version of the NBN. You can read it here (PDF format) on page 39.

However, the Government has repeatedly refused to release the underlying analysis which produced this document, and its few paragraphs of text are broadly regarded as being politically compromised.

Joyce’s comments on demand for high-speed broadband are also inaccurate.

Technology figures such as Atlassian co-founder Mike Cannon-Brookes — one of Australia’s most successful technology entrepreneurs — and others have stated in public that gigabit speeds are essential for the nation’s long-term development. In addition, internationally telcos such as AT&T, Google, Verizon and more are talking up the need for such speeds.