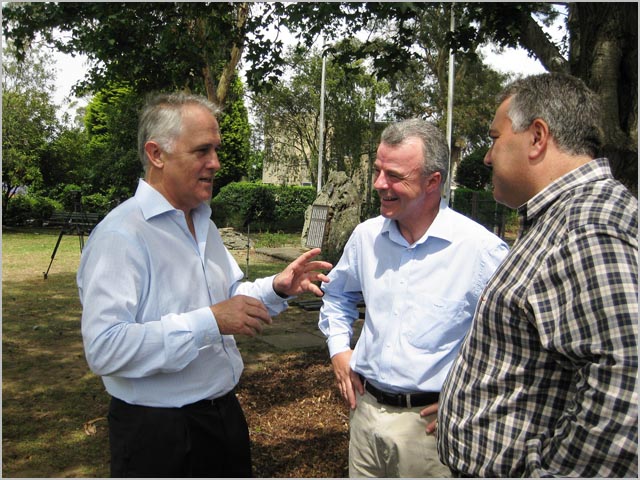 news Shadow Communications Minister Malcolm Turnbull has responded to the claim that the Coalition is misrepresenting its own estimates of the cost of Labor’s NBN policy, stating that the $94 billion figure being cited is not a ‘worst case scenario’, with the Coalition estimating that Labor’s NBN could actually cost more than $100 billion and take 20 years to deliver.

However, despite the fact that the Coalition’s policy document contains a range of cases, over the past week senior Coalition figures such as Shadow Communications Minister Turnbull and Opposition Leader Tony Abbott have referred only to the $94 billion figure, stating that this is the figure that “will” eventuate under Labor’s NBN.

This has led to some independent commentators, such as the writer of this article, to allege the Coalition of consciously misrepresenting its own estimates about Labor’s NBN project. In addition, Labor figures such as Communications Minister Stephen Conroy have accused the Coalition of “lying” about the cost of Labor’s NBN and of “concocting” financial figures.

In a statement published on his website this morning, Turnbull responded to the allegations. “As for Labor’s plan, we modelled some very realistic assumptions of the NBN rollout so far against the fantasy figures in its corporate plan to show funding costs could easily skyrocket to $94 billion,” the Shadow Communications Minister wrote.

Turnbull then went through the series of assumptions which the Coalition has made, in order to come up with the $94 billion figure.

“The NBN has missed every rollout target it has set for itself. So is it so unrealistic to assume the rollout won’t be complete until 2025, four years late?” the Liberal MP asked. “We also modelled NBN revenues. NBN Co assumes it can increase broadband access revenues by 9.2 per cent a year in real terms, and in doing so increase the share of household income devoted to fixed-line telecoms by 60-70 per cent. Our more realistic assumption (shared by independent telecoms analysts) is that its share of the wallet will stay constant.”

“We modelled the percentage of wireless-only households rising to 25 per cent rather than the 16 per cent assumed by NBN Co – reflecting the fact last year the number of wireless broadband accounts in Australia for the first time exceeded the number of fixed broadband accounts. And we modelled that the cost of passing each house with fibre would be 40 per cent higher than the NBN had estimated, to bring it more in line with independent analysts’ forecasts and the on-the-ground experience of Telstra’s fibre rollout in South Brisbane.”

“Our assumptions that led to the $94bn cost are far from a “worst-case” scenario; in reality the final cost could easily exceed $100bn and the rollout take 20 years to complete.”

Turnbull said that according to Labor’s “delusionally optimistic forecasts”, the downside of its NBN approach was clear.

“The NBN’s corporate plan admits Labor intends to triple wholesale charges across the next decade,” he wrote. “That means the retail price for broadband will increase to at least $90 a month on average by 2021 for someone hooking up to the NBN. Given the Coalition’s more efficient and targeted investment, we have modelled that the average household will pay at most $66 a month – saving about $300 a year against Labor’s plan. If anything, this vastly understates the gap.”

However, in his defence of the Coalition’s financial estimates, again Turnbull did not go into the detail of the Coalition’s background briefing document. The document itself states, for example, that it is not yet clear whether the Coalition’s assumptions about wireless adoption compared to fixed broadband adoption will be accurate.

“None of the replacement assumptions described in the proceeding section are unreasonable,” the document notes. “In three of the four cases they arguably offer a significantly better representation of likely reality than NBN Co’s existing overly optimistic forecasts. A possible exception is the sharply higher rate of wireless‐only households, given it is too early to be certain next‐generation wireless will be the threat to fixed line broadband that some industry experts believe.”

In addition, other aspects of the Coalition’s analysis are not conclusive. For example, the background briefing document notes that NBN Co has disclosed that its early customers are showing “a greater tendency to choose or move to higher speed (and higher cost) plans than expected”. NBN Co announced in October 2012 that 44 percent of early adopters of the network were taking its highest speed plans at 100Mbps.

However, the Coalition’s document rejects this early evidence from NBN Co, stating that the claim that higher usage of Labor’s NBN would eventuate was “based on a relatively narrow base of evidence”, and that “a more realistic assumption” could be made about revenue growth.

In a further example, using a single source (a research report issued by Macquarie Bank’s equities division in January this year), the Coalition suggested in its document that the average capital expenditure cost for Labor’s fibre connections would be about $4,000. However, Communications Minister Stephen Conroy stated yesterday that the true cost was closer to $2,400, casting doubt upon the Coalition’s figures.

It is also not clear whether the Coalition’s claim that Australians will be paying “at least 90 a month” on average to access the NBN in the long-term are accurate. NBN retail plans are currently available starting at around $30 a month, and that NBN Co has given long-term price commitments to the competition regulator, the ACCC, to ensure broadband prices cannot balloon out.

opinion/analysis
Yesterday I made the somewhat audacious claim that Turnbull was “lying” — consciously misleading the public — with respect to the Coalition’s own estimates about the cost of Labor’s National Broadband Network policy. I made that claim after I had published an earlier article demonstrating that the Coalition’s own background briefing document does not conclusively show that the cost of Labor’s NBN policy will definitely be $94 billion. That is one possibility included in the document — but not the only possibility.

Turnbull is clearly aware now that the credibility of the $94 billion figure is in question and is attempting to provide further background to justify it. I applaud this attempt to respond to the debate on the issue. However, to my mind, his statements today have unfortunately only added to the issue of credibility around this already highly contested figure, and have raised questions about Turnbull’s knowledge of the Coalition’s own research.

For example, how does the Liberal MP account for the fact that the Coalition’s background briefing document clearly states that “it is too early to be certain next‐generation wireless will be the threat to fixed line broadband that some industry experts believe”, calling into question one of the Coalition’s four key assumptions which went into compiling the $43 billion figure?

Secondly, how does Turnbull account for the fact that that same background briefing document clearly acknowledges the higher than expected uptake of the highest-speed NBN fibre broadband plans? Why does the background briefing document dismiss that evidence as being based on “a relatively narrow base of evidence”, when it is in fact the only evidence which Australia’s NBN project currently has? It’s worth noting that survey data seeking the views of Australians on the issue of what speeds they would prefer to connect to the NBN also backs up this demand for higher-level speeds; a recent survey showed 85 percent of Australians wanted speeds of 50Mbps or higher.

Yesterday I had believed that Turnbull was highly aware of the contents of the Coalition’s background briefing document in these areas and was consciously misrepresenting the $94 billion figure. Today I still believe there is an element of that, but I am also starting to suspect that the Member for Wentworth hasn’t gone through the document with as fine tooth a comb as he probably should have. If you believe its assumptions and regard its short list of references as credible, the document clearly shows that the $94 billion figure is a possibility in terms of costing Labor’s NBN — but not the only possibility. And the document itself acknowledges the possible shortcomings of its analysis. It’s time senior Coalition figures such as Turnbull did too, instead of stating that the $94 billion cost “will” definitely come to pass.

One further question … where did Turnbull source the “more than $100 billion, 20 years” allegation from? I haven’t been able to find a basis for these figures in the Coalition’s background briefing document. These figures, also, need to be checked to see what their background rationale is.