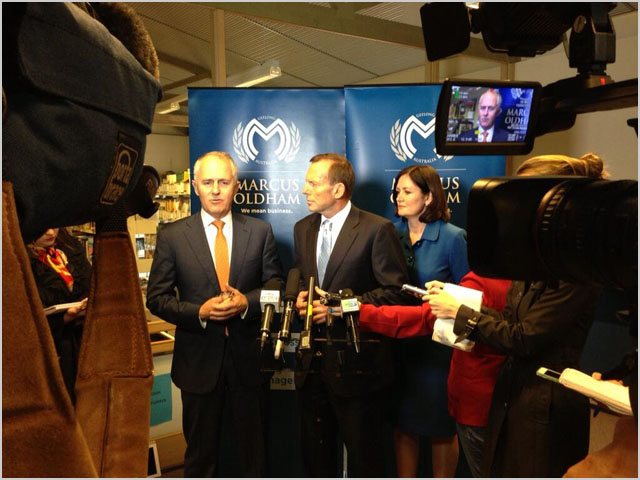 news Communications Minister Stephen Conroy has accused his opposite Malcolm Turnbull and Opposition Leader Tony Abbott of openly “lying” to exaggerate the key differences between the two sides of politics’ National Broadband Network policies, using a number of concrete recent examples to demonstrate his point.

However, despite the fact that the Coalition’s policy document contains a range of cases, over the past week senior Coalition figures such as Shadow Communications Minister Turnbull and Opposition Leader Tony Abbott have referred only to the $94 billion figure.

The Coalition has also pegged the long-term monthly cost of accessing Labor’s NBN for consumers at around $100 per month, and its own cost at about two thirds of that at around $66 per month, despite the fact that NBN plans are currently available starting at around $30 a month, and that NBN Co has given long-term price commitments to the competition regulator, the ACCC, to ensure broadband prices cannot balloon out.

A good example of the situation was contained in a fraught debate between Conroy and Turnbull on this morning’s Today Show on Channel 9. In the show (the full transcript and video is available here), a number of the Coalition claims mentioned above were made by Turnbull or the show’s host Lisa Wilkinson in her introduction as the program commenced.

In response, Conroy said: “Well there was a number of just outright lies Malcolm just told.  Labor’s plan is not costing $90 billion … You have just decided to make some assumptions and add some numbers together … It’s just a lie, it’s false.”

Earlier in the program, Conroy said in response to the monthly pricing claim: “We also gave the NBN Company a directive – we said everybody in Australia no matter where they live should pay the same price no matter where you live, doesn’t matter how far away or how difficult, you’ve got to charge the same price, universal pricing. Prices start – despite even figures you had up on the screen Lisa, the cheapest NBN plan in the marketplace today is $29.95 and the ACCC have got commitments the NBN Co [gave].”

“This is just the latest lie told by the Coalition as they attempt to promote their inadequate broadband plan, which doesn’t serve Australia’s needs now or into the future,” Senator Conroy said in a media release yesterday. “The facts are that the Marcus Oldham College will get NBN fibre under Labor. NBN Co is building fibre all the way to the premise, including schools, in every exchange area dedicated as Band 1 and Band 2 in Telstra’s classification of exchanges.”

And then, on the Today show this morning, Conroy added: “It’s the same sort of lie that Malcolm Turnbull did yesterday in Geelong, where he stood up at a school in Geelong and he said this school won’t get the NBN.  Well it is just a lie.  It is getting the NBN.  And has Malcolm admitted that? No.”

Delimiter has attempted to contact Turnbull’s office this morning for a response to Conroy’s statements about the Coalition directly “lying” about the differences between the two sides’ broadband policies. We will commit, as normal, to publishing both sides’ complete views on the issue to ensure each side is able to state its case freely.

opinion/analysis
I haven’t weighed in yet on what I think about the Coalition’s rival NBN policy as a sum total yet; I’ll leave that to next week when all of the dust that is flying this week has settled down a little. I want to hear the opinions of the experts first.

However, I do want to address Senator Conroy’s specific claims yesterday and this morning that Shadow Communications Minister Malcolm Turnbull and other senior Coalition figures such as Tony Abbott are “lying” about the NBN.

I think there is a very fine distinction to be made here. For example: If we examine the claim that Labor’s NBN will cost $94 billion, it quickly becomes clear (as I wrote in a piece for the ABC’s The Drum site yesterday) that the Coalition has not yet presented sufficient evidence to verify its claim that Labor’s NBN policy will cost $94 billion to construct. Any observer can easily look at the figures contained in the Coalition’s own background briefing document and verify that that $94 billion figure represents a “worst of the worst”-style scenario where everything possible goes wrong for NBN Co under Labor. And even then, the Coalition has not provided enough references to show that its figures in the “worst of the worst” case are correct. The evidence is just not there yet.

So is it “lying” when a senior figure such as Malcolm Turnbull claims that Labor’s NBN could cost up to $94 billion?

In my opinion, no. It is true that at least some of the Coalition’s figures could be in the right ballpark, and that Labor’s NBN could cost a significant amount more than Labor is planning for. We’ve already seen quite a few irregularities in NBN Co’s rollout process, and Turnbull personally has, of course, done extensive research on similar rollouts internationally.

However, this isn’t what Turnbull has been claiming.

If you look at Turnbull’s statements over the past several days, what the Liberal MP has repeatedly claimed is that Labor’s NBN “will” cost $94 billion — as though it’s an irrefutable fact. “We estimate it will cost $94billion to complete,” Turnbull said on the Today Show this morning. “It will be $94 billion to the taxpayer,” Turnbull told Leigh Sales in a separate interview on 7″30. “It’s going to cost taxpayers $94 billion,” he told Sky News. Etc.

What we’re left with is a situation where Turnbull is clearly aware (as one of the principle authors of the Coalition’s policy and background briefing) that the $94 billion figure is only one potential figure which the Coalition’s own estimates came up with, and that it represents the worst possible scenario — if every single thing goes wrong for Labor’s NBN project. A total disaster scenario.

In short, Turnbull is clearly aware that the statement he is making with respect to the claimed $94 billion cost of Labor’s NBN is false, and he is aware that he is misrepresenting the Coalition’s own research on this issue. Furthermore, the Liberal MP is aware that he is doing so for political gain. This is very much the definition of lying: There is intelligent awareness of an intent to deceive.

In my professional opinion as a journalist, Conroy is right: Turnbull is lying about the cost of Labor’s NBN.

Regular readers will know that I have always, in the past, avoided making this claim. I have always used the phrases “misleading”, “appeared to be mistaken” and so on, when discussing falsehoods on the part of politicians. I normally do this because it is normally very hard to prove intent and awareness that someone knows the truth but is stating the opposite. Most of the time, people are just expressing their opinion or are mistaken. However, in this case we have a clear example where Turnbull can be shown to know the truth as stated in the Coalition’s own background briefing document, but has chosen to state something different. The Coalition’s NBN estimates are varied; but Turnbull has distilled them down to the worst of the worst case, ignoring all of the complexity his own research has placed around its cost estimates.

This is a very serious and disturbing thing for someone as high-profile as Turnbull to do.

There are other examples here too. Yesterday, Abbott openly stated that Marcus Oldham College in Geelong would not receive the NBN. However, as Opposition Leader, Abbott is aware that both the Coalition and Labor have pledged to deploy some form of broadband universally throughout Australia. Whether it’s satellite, wireless or fibre, Abbott is aware that both policies feature a ‘universal’ component — nobody is going to be left out.

As with Turnbull’s claims about the cost of Labor’s NBN policy, in this case Abbott is intelligently aware of what he is saying, and consciously deceiving an audience for political gain. Again, Conroy’s right: We can objectively say that this is “lying”. Abbott is not “mistaken” in this case: He has demonstrated that he is aware of the nuances of each sides’ policies.

We’re also seeing a consistent pattern emerge from the Coalition, and Turnbull in particular, in this area. Last week Turnbull had a separate interview with radio shockjock Alan Jones, in which Jones made a number of highly contested statements about the Australian telecommunications landscape, such as the misconception that wireless represents the future of broadband service delivery, and that houses receiving the NBN would have their telephone lines switched off without the residents’ consent.

In response, Turnbull wholeheartedly backed Jones’ statements. “Well Alan I have to agree with everything you’ve said there.  It is a very, very sorry – all you’ve done is state the facts,” said Turnbull. The Liberal MP did not correct or clarify any of the controversial statements which Jones made in his broadcast, but in general supported Jones’ sentiments in all of his responses to the shockjock’s questions. This isn’t “lying” per se; but it is very close to it. Turnbull is aware that a number of statements which Jones made are very highly contested or false; but he did not correct them — in fact, he supported them.

Personally, I find it very hard at the moment to stomach the amount of misinformation emanating from the Coalition with respect to the NBN at the moment. At the Tuesday policy launch this week (see the full videos here and here), Turnbull and Abbott stuck very closely to an obviously well-thought-out script with respect to their alternative NBN policy; I’ll have more to say about that later. The pair didn’t deviate too much into the kinds of issues which Conroy has highlighted in their statements over the past several days, and stuck to the straight and narrow path about comparing the two policies.

However, since that point, it appears that the message which Turnbull and Abbott are generating with respect to the NBN has deteriorated. Conroy has a very, very valid point. It can be conclusively shown that a number of statements being made by senior Coalition politicians at the moment do indeed constitute lying behaviour. And I don’t think that’s something we should tolerate in our national leaders.