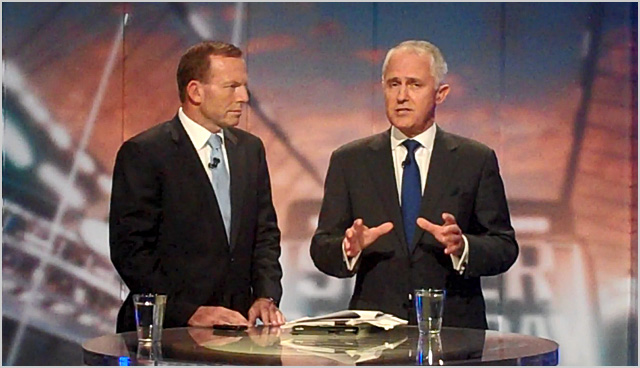 The Coalition’s full policy document has been uploaded online here, and there’s also an executive summary of the document online, both in PDF format. Additionally, Opposition Leader Tony Abbott and Shadow Communications Minister Malcolm Turnbull have issued a joint media release associated with the policy launch to highlight its key points. There is also an extensive set of background briefing papers associated with the policy. Abbott and Turnbull also hosted a press conference in Sydney this morning; Delimiter will shortly upload the entire press conference video and question and answer session.

The detailed policy document discloses that these speeds will predominantly be delivered over the long-term with fibre to the node technology through upgrading Telstra’s existing copper network, focusing on areas where “the poorest broadband” services are currently suffered by residents and businesses. By the end of 2019, some 71 percent of premises will be covered with fibre to the node infrastructure.

In some other areas — such as greenfields housing estates, and “wherever copper has to be replaced” — such as areas where Telstra’s copper has degraded — fibre to the premise technology, as under Labor’s current NBN plan, will be deployed. The Coalition is estimating that some 22 percent of premises would be covered by FTTP under its plan.

As with Labor’s current NBN, the Coalition also plans to make use of fixed wireless and satellite technologies to reach a small segment of the population where it’s not economical to deploy fixed fibre infrastructure. Fixed wireless will be used to reach some four percent of premises under the Coalition’s plan, with another three percent served by satellite.

Its statement states that the Coalition’s NBN plan will ensure that average retail prices won’t exceed prices for Labor’s NBN, but that over time, savings achieved in the rollout will mean that the average household broadband plan for the Coalition’s NBN will be “considerably more affordable” than the same plans would be if Labor’s NBN project proceeded.

“By 2021, the projected retail cost of the average broadband plan under a Coalition NBN would be $66 per month, compared to at least $90 per month with Labor’s NBN,” the group’s statement this morning read.

The Coalition is also promising that its version of the NBN will be substantially cheaper on taxpayers’ wallets than Labor’s NBN, although the pair’s estimates about costs differ wildly. NBN Co is currently projecting that it will require about $30 billion worth of government investment over its life, with another $14 billion to be funded through debt arrangements. The total capital expenditure required for Labor’s NBN is currently estimated by NBN Co at $37.4 billion.

However, the Coalition is estimating that Labor’s NBN will cost more than $90 billion to complete, with the Coalition’s alternative to cost just $29.5 billion.

Turnbull told journalists this morning that the Coalition believed income from its plan would be similar to that under Labor’s NBN, meaning that it was likely to also be able to make a return on the Government’s invested capital in the project. Labor’s NBN is currently estimating it will make a return on the Government’s investment of $7.1 percent over the long term.

There are a number of other key pledges contained in the Coalition’s extensive policy document. For example, the Coalition proposes to conduct a number of reviews into the NBN project as soon as it takes power.

Lastly, a Coalition Government would conduct an independent review into the long-term structure and regulation of telecommunications in Australia.

The Coalition included the following table in its document to detail how its policy varies from that of Labor’s, when it comes to the NBN: 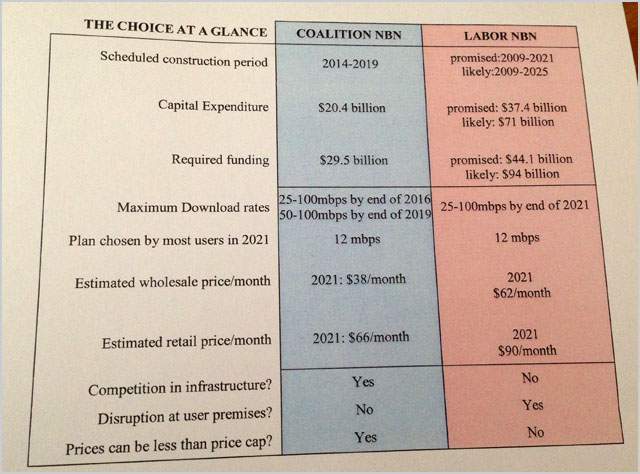 Key to the Coalition’s alternative NBN vision is the claim that the flagship Labor project has been too slow to deliver better broadband to Australians.

“The Coalition’s plan will ensure that all Australian households and businesses can reap the benefits of the NBN much sooner and at affordable prices for consumers,” the group’s media release stated. “Labor has a record of failure in delivering the NBN. Under Kevin Rudd, Labor promised fast broadband for all Australians by 2013 for a cost of $4.7 billion.”

“After more than 5 years in Government, only 10,400 users have signed up to the Labor’s fibre network despite $7.5 billion in cash injections to the NBN by June – already almost double the money Kevin Rudd said was needed to complete the entire NBN. Based on the NBN’s own targets – which they have consistently failed to meet – the rollout will not be finished until 2021. On its current pace, the rollout will take years longer.”

“Labor now claims its NBN will cost $37 billion but latest estimates and available data indicate this projection is completely misleading. The real cost of Labor’s NBN is likely to be more than $90 billion by 2021.”

“There’ll be more accountability under a Coalition government with NBN Co. required to report more often to parliament, to explain its financial performance to taxpayers each quarter and provide more disclosure about its rollout and end-user take-up.”