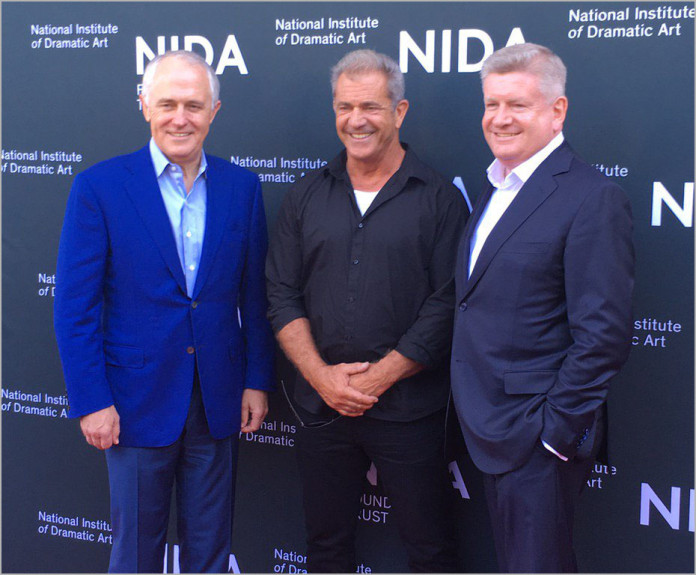 news Mitch Fifield has released a sharply worded response to detailed evidence showing Malcolm Turnbull’s version of the NBN has fallen behind on its rollout and is billions of dollars over its cost projections. However, the Communications Minister did not directly rebut the details of the evidence involved.

Late last week Labor published a detailed and referenced table which appears to conclusively show that the version of the NBN initiated by Malcolm Turnbull was behind on almost every measure by its own measurements, as well as having blown out in costs. The table compared the NBN company’s 2013 Strategic Review and current statistics. 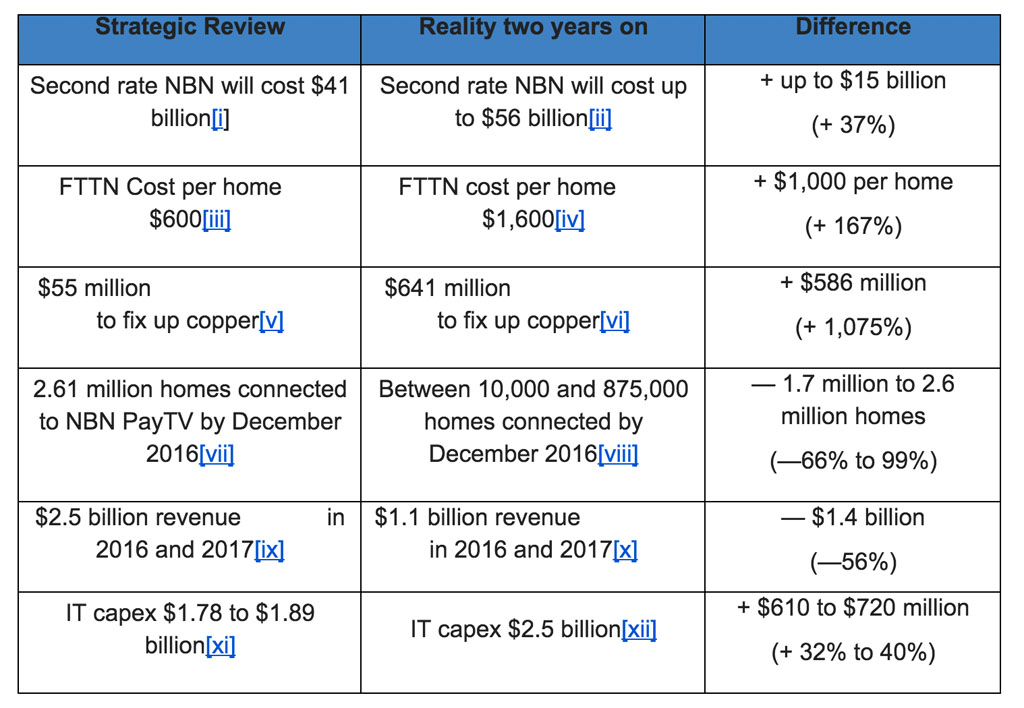 The construction of the Strategic Review was overseen by JB Rousselot, an executive appointed to the NBN company after Turnbull became Communications Minister. Rousselot has close links to Turnbull, having worked with the Member for Wentworth at a number of previous companies. The pair reportedly jointly own a yacht together.

Despite the inaccurate nature of the Strategic Review published in November 2013, in September this year it was revealed that Rousselot had received a bonus performance payment of $165,000 on top of his NBN salary. The bonus took his total salary to $1.04 million, according to the Daily Telegraph.

In a statement issued this afternoon, Fifield slammed what he said were “careless claims” being made by Shadow Communications Minister Jason Clare. Delimiter recommends readers download Fifield’s whole statement in PDF format here.

In his statement, Fifield said a number of claims made by Clare recently had been “extraordinary”, as they were “full of hot air and careless of the well-known facts”.

However, Fifield did not directly refute any of the details of the evidence presented by Clare in the Opposition’s financial and rollout timing table released last week. Instead, in his statement today, the Minister attacked a number of other statements made by Clare recently.

The situation mimics similar comments in an interview with Sky News yesterday. On that occasion, Fifield similarly refused to directly respond to claims about the cost of remediating Telstra’s copper network, but instead attacked Labor’s approach to the NBN.

Regarding Clare’s statement that as Communications Minister, Malcolm Turnbull had bought back the “old” copper and HFC cable networks owned by Telstra and Optus, Fifield said in today’s statement that the Government had not paid a single dollar more for the networks than Labor had under deals Labor had previously struck.

“In June 2011 it was the former Labor Government which oversaw binding deals with Telstra ($9 billion) and Optus ($800 million)  — to stop using these networks,” Fifield said. “Despite paying these companies to stop using their networks, Labor did not negotiate any rights for NBN Co to access or acquire this infrastructure.”

Labor’s plan had been to see the networks shut down and replaced with technically superior Fibre to the Premises architecture.

Fifield also attacked a statement by Clare that the Telstra and Optus deals were “both bad decisions made without proper due diligence”.

With respect to this claim, Fifield said the Coalition had an approach of using the copper and HFC cable networks to get high-speed broadband to Australians “quickly and cost-effectively”, compared with Labor’s slower FTTP rollout model.

The Minister said the NBN company’s 2016 Corporate Plan had forecast the cost per premises for the Coalition’s Fibre to the Node model at about $2,300, compared with a much higher per-premises cost of $4,400 for Labor’s FTTP model. For HFC cable connections, the cost is forecast to be lower again, about $1,800 per premises.

The Liberal Senator also attacked Labor’s statements regarding what the cost of remediating Telstra’s copper network for FTTN. Leaked NBN documents have shown the estimated cost to be $641 million — a factor ten times higher than the Strategic Plan had estimated.

Fifield did not refute this cost figure directly. He said:

“All costs associated with upgrades, extensions and remediation work on the NBN fixed line network have already been accounted for within the 2016 Corporate Plan peak funding range that was released in August.”

“The Australian Labor Party is relying on inappropriately obtained and selectively misused internal working documents for its key claims despite these documents being out of date and unsourced.”

He also pointed out that the NBN company had stated that there was “no serious copper remediation required” in its FTTN deployment so far.

Finally, Fifield took aim at the release of other leaked NBN documents which appeared to show that Optus’ HFC cable network was not fit for use as part of the NBN.

“NBN has publicly confirmed its HFC trial in Queensland is proving to be a great success and that the key claims asserted regarding Optus’s HFC network are untrue,” the Minister said.

“There are 4,500 premises involved in the trial and users have been receiving speeds of around 100Mbps/40Mbps. NBN has not found any unexpected technical issues with the Optus network in the Redcliffe area.

“There was a simple explanation for the matters canvassed in the internal planning document. As any commercially-focussed business would, NBN Co thoroughly and regularly reviews its strategy and forward plans. Modelling a range of scenarios to determine where there are risks or potential cost savings is commonplace.”

“NBN also confirmed the unsourced material had not even been seen by the executive management yet the Labor Opposition continues to seek to carelessly peddle inaccurate claims, with disregard for the reputations of both Optus and NBN.”

opinion/analysis
I have nothing personally against Mitch Fifield — he is a highly competent Senator and Minister. I have, in fact, a great deal of respect for him in his professional capacity. I wish we had more level-headed and capable figures in the Parliament like Fifield. He rarely puts a foot wrong and does much to keep the Senate on track. He is proving to be a solid Arts Minister in his early days administering that field, quite aside from his role in the Communications portfolio.

However, I must apologetically note that in his detailed statement today, the Minister has simply not addressed the core claims made in the Opposition’s detailed table released last week. That table, using the NBN company’s own data, shows that that the version of the NBN initiated by Malcolm Turnbull is behind on almost every measure by its own measurements, as well as having blown out in costs.

Until the Minister or the NBN company can provide new information to refute Labor’s detailed and evidenced comparison table, we must consider that the table stands.

In this vein, Delimiter will shortly start to change the way that we report on the NBN under the Coalition Government. Previously, we have taken the general approach of reporting that Labor has claimed that the project has blown out in cost and is delayed, compared with the Coalition’s projected estimates.

From now, unless the Government provides evidence to the contrary, Delimiter will report as commonly accepted and referenced fact that the project has blown out in cost and is delayed.

This is a subtle difference, but a profound one. Claims made by any Opposition or minority party should be taken with a huge grain of salt. Labor obviously has a huge incentive to sledge the Government. And its own record with respect to the NBN is not spotless … it severely underestimated the size of the task.

But when one side of politics provides hard evidence of its claims, and the other does not refute them, it is another situation entirely. Labor has thrown down the gauntlet to the Government this week to show that it is keeping the NBN on track. Today’s response from Fifield really does not cut the mustard. If he wants to retain control of the narrative on the NBN, the Communications Minister must come down out of the clouds and respond with hard facts: Not the mere fighting words we’ve seen from him today.