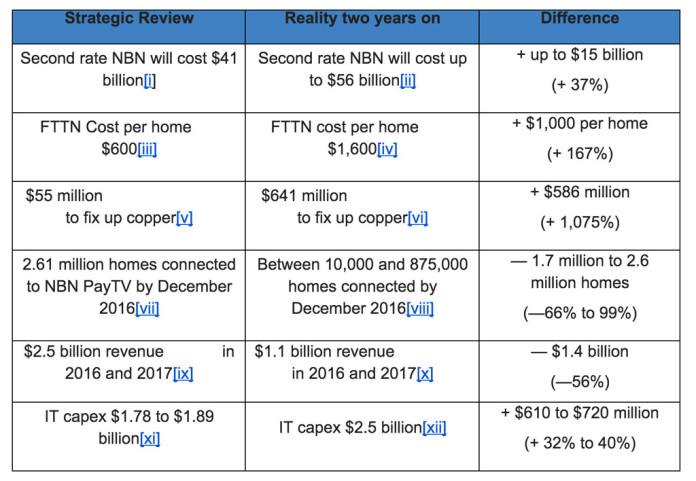 news The Opposition has published a detailed and referenced comparison table which appears to conclusively show that Malcolm Turnbull’s version of the National Broadband Network project is behind on almost every measure by its own measurements, as well as having blown out in costs substantially.

The table, found below, was contained in a media release issued by Labor late last week. Delimiter has included it above. The references that it refers to can be found at the bottom of this article.

In the table, Labor notes significant differences between the cost and rollout timing estimates contained in the NBN company’s Strategic Review and the current reality. The compilation of the Strategic Review was one of the first acts which Turnbull ordered after he took up the role of Communications Minister in September 2013.

The construction of the document was overseen by JB Rousselot, an executive appointed to the NBN company after Turnbull became Communications Minister. Rousselot has close links to Turnbull, having worked with the Member for Wentworth at a number of previous companies. The pair reportedly jointly own a yacht together.

The November 2013 Strategic Review, Labor said, estimated Turnbull’s Multi-Technology Mix version of the NBN as costing $41 billion, with a cost per home of $600 for deploying the Fibre to the Node technology preferred by Turnbull over Labor’s technically superior Fibre to the Premises model.

The Strategic Review had also estimated a cost of $55 million to remediate Telstra’s copper network, that 2.61 million homes would be connected to the HFC cable networks owned by Telstra and Optus by December 2016, that the NBN company would make $2.6 billion in revenues in 2016 and 2017, and that total IT systems capital expenditure would be between $1.78 and $1.89 billion.

The reality, according to Labor’s references, was far different.

The NBN company’s current estimates were that its rollout would cost up to $56 billion (up to $15 billion more), FTTN would cost $1,600 per premise ($1,000 more), it would cost $641 million to fix Telstra’s copper network ($586 million more) and that only up to a third of the planned premises would be connected to the HFC cable networks by December 2016 (1.7 million to 2.6 million premises less).

The NBN company’s projected revenues are $1.4 billion less than they were projected to be in the Strategic Review, and IT capex is slated to cost between $610 and $720 million more.

“The Strategic Review was Malcolm Turnbull’s justification from switching from Labor’s fibre NBN to his second rate copper version. Two years on, and it is now clear that Malcolm Turnbull made this decision based on a very dodgy report, that was hopelessly wrong,” said Shadow Communications Minister Jason Clare.

“Malcolm Turnbull is pretty agile but he can’t dodge responsibility for this. The NBN is rolling out slower than he promised and it is going to cost a lot more than he promised. This is no one else’s fault but his.”

Clare said the purchase of Telstra’s copper network and Optus’ HFC cable network was also “another big mistake”. Labor had planned to shut the networks down.

“In November a leaked document from NBN revealed that the Optus HFC network is not fit for purpose and NBN Co will need to spend hundreds of millions of dollars to fix it up or overbuild it,” said Clare.

“Last week a second leaked NBN document revealed that the cost to fix up the old copper network is more than ten times what Malcolm Turnbull said it would cost when he released the Strategic Review. The same leaked document also shows that the cost per home of Malcolm Turnbull’s second rate copper NBN has nearly tripled.

Delimiter invites readers to closely examine Labor’s references to determine their accuracy. We will commit to publishing in full any rebuttal of these points or provision of broader context received from the Government.