blog One of the Financial Review’s main investigative journalists, Neil Chenoweth (who you may remember from such sterling books as Packer’s Lunch and Virtual Murdoch), has delivered a very important series of articles for the newspaper this morning, publishing 10 years’ worth of financial accounts from Apple Sales International, the iconic technology company’s infamous Irish subsidiary. Chenoweth writes (we recommend you click here for the lengthy and detailed article):

“US tech giant Apple has shifted an estimated $8.9 billion in untaxed profits from its Australian operations to a tax haven structure in Ireland in the last decade, an investigation by The Australian Financial Review has found.”

Delimiter has been banging on about this issue for years. Every year, a new set of Apple financial results are published through the Australian Securities and Investments Commission. And every time those results are published, Apple’s making a stack more revenue but continuing to pay very little tax here, with its claimed Australian profits being significantly less on a percentage basis than the profits Apple lists in its home country of the US. 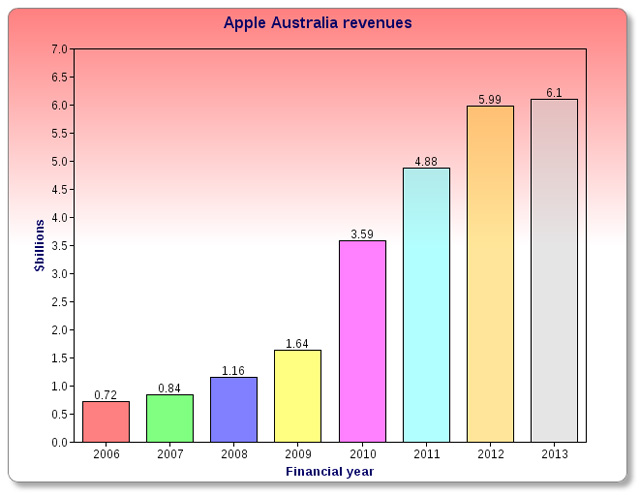 As the Financial Review argues this morning, and as we strongly agree, it should be obvious to anyone with half a financial brain that something is fishy here. Jurisdictions all across Europe are reining in companies such as Apple and Google for their tax habits. It’s time Australia got into the game and stopped letting these billions of dollars go untaxed.

Of course, there are obviously several caveats we should note, before people start lighting the torches and setting out to burn Apple Australia chief Tony King at the stake. For starters, nobody here is saying that Apple’s done anything illegal; it is very likely, as Google Australia has previously pointed out with respect to its own tax affairs, that the company is simply working within loopholes in Australia’s existing tax law, as well as those of other jurisdictions.

In addition, Chenoweth doesn’t have a complete set of data; the journalist only obtained figures from 2000 to 2009; it’s unclear how definite the $9 billion headline figure is.

However, in general we have to agree with sentiments expressed by Labor MP Ed Husic about this situation in January last year. At the time, Husic said: “It’s simply staggering to see Apple make more money but manage to pay less tax in Australia,” he said. “When you consider the massive overcharging that has occurred with some of their products, it seems both Australian consumers and taxpayers are shouldering a heavy load to fund Apple’s bottom line.” Amen.