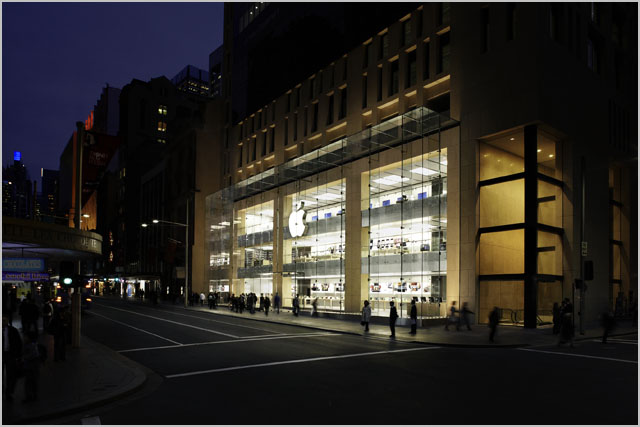 news Apple has revealed that its Australian division has experienced incredible levels of revenue growth over the past five years, in new financial documents released this week which paint a graphic picture of the effect that the global resurgence of the iconic technology giant’s fortunes have had on its local operation.

Globally, the success of new product lines which Apple has introduced over the past five years (such as the iPhone and iPad) has had an extraordinary impact on its revenues. In three of the most four recent fiscal years, the company has achieved annual revenue growth of more than 50 percent, with the exception of the recession year of 2009 in which its growth dipped to 14.4 percent.

All of this has added up to create the most valuable technology company in the world — with more than $108 billion in revenues for financial year 2011 and a pile of current assets, predominantly in cash, which is estimated to be close to $100 billion. In financial year 2006, the company was making less than a fifth of those revenues globally — $19.3 billion — and it had just $6 billion in cash on hand. Yesterday, the company delivered the first complete picture for some time of what those results have looked like in Australia.

In its annual set of financial results published yesterday with the Australian Securities and Investments Commission, Apple revealed that it made $4.88 billion in revenues from its Australian division in the year to 24 September 2011. That figure was up $1.29 billion compared with the previous year, in what is believed to be an unprecedented annual revenue jump for a technology company operating in Australia. Apple Australia’s financial results for the 2008 financial year, published by ZDNet.com.au several years ago, show the company was at the time making less than a quarter of that revenue — $1.16 billion. And in 2006, the company was making much less — just $717 million a year.

The figures place Apple Australia in the same league in terms of pure revenue as the local divisions of other major global technology giants such as HP and IBM. However, Apple’s entire revenues come from individual product sales; it does not hold the style of major IT services contracts which IBM and HP do with major government and private sector organisations. Those contracts can often run into the hundreds of millions of dollars.

Apple’s Australian headcount has grown dramatically along with its financial growth, as the company has hired a throng of new administrative and retail staff to deal with its massive increased product distribution and store footprint locally. In 2006, the company employed some 322 Australian staff. By the end of 2011, it had some 1505. It spent $80 million on local wages and salaries in 2011.

Multinational technology companies operating in Australia typically don’t disclose much profits locally, with most of their costs being allocated locally (despite the fact that they might be generated overseas) and their financial statements don’t typically disclose much tax being paid in Australia. With respect to this trend, Apple is no exception. In its local financial results filed yesterday, the company stated that it made just $190 million in local profits in the past year, with $94 million of that being taken out for local tax. The year previously Apple actually made a net tax gain, off claimed local profits of $9.98 million. 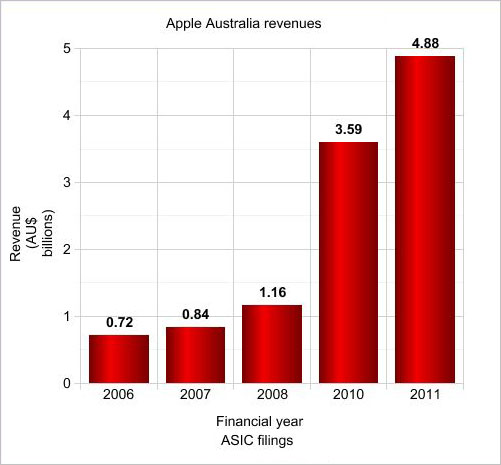 Apple’s success has come about through the rapid uptake of virtually of all its product lines over the past half-decade in Australia — ranging from the iPhone and iPad, to the iPod and even a resurgence in interest in Apple’s Macintosh line of computers. Foad Fadaghi, a research director at local analyst firm Telsyte, said it was “no surprise” to see such strong financial performance from Apple locally.

Fadaghi said the company had seen a five-fold increase in the uptake of Apple’s flagship iPhone handset since 2009. In that year, the analyst firm estimated there were about 700,000 iPhones in use in Australia. “As of 2011, that has increased to about 3.7 million,” Fadaghi said in an interview this morning.

“That’s a massive growth in two years — that’s incredible,” he said, adding the iPhone’s growth meant the Apple handset had “severely cannibalised” other vendors in the marketplace — notably Nokia, whose position in the smartphone arena has been decimated over the past few years. Fadaghi said the iPhone was estimated to own about 42 percent of the smartphone market.

The iPad has done even better in term of market share, according to the analyst, capturing over 80 percent of the local tablet market — which Apple virtually created singlehandedly — with over 1.2 million iPads in Australia. “It’s pretty incredible, considering it was launched in May 2010,” said Fadaghi. He noted the iPad had also been successful over the recent Christmas period.

And the analyst had even tracked a movement towards Apple products in the hyper-competitive laptop and PC markets — where Apple has paradoxically managed to have both “very expensive” desktop hardware often used by professionals as well as lower-end consumer products such as the MacBook Air which have performed strongly in their own segment.

“No doubt you’ve seen a movement towards Apple products, you’ve seen it in the enterprise as well,” Fadaghi said, noting a so-called ‘halo effect’ which had seen Australians buying Apple Macs and MacBooks after becoming enamoured of the company through other products such as the iPod, iPad and iPhone lines. And Apple was even making substantial amounts of money through selling applications, music and other content through its bundled iTunes store.

Overall Fadaghi said Australians seemed to be very partial to Apple products compared to other countries — with a higher rate of local iPhone usage locally compared with the US. Part of this was because of the nation’s first-world, highly-educated status, he said — as a country we tend to gravitate towards more expensive technology products such as the ones produced by Apple.

In 2012, analysts are already predicting more massive revenue growth from Apple, on the back of the company’s successful iPhone 4S launch, as well as expected new products in the iPad and iPhone lines, as well as a predicted expansion into other areas of the consumer electronics market such as integrated televisions. So is there more room for Apple to grow locally as well?

“Absolutely,” said Fadaghi today. “Especially if they start playing in the consumer electronics space via televisions and other devices. Once they’ve got people locked into their ecosystem, they can upsell. For the best part of it, it’s a licence to print money … this is what’s happening with humanity. We’ve become a technology society.”

opinion/analysis
I’ve never seen anything like this level of revenue growth from any other technology company operating in Australia. The only example I have to compare it to would be the massive jump in local revenue experienced by networking giant Ericsson in the 2006 calendar year, when it booked $1.4 billion in revenue — up from $557 million the previous year. However, that jump was only temporary — and was caused by a billion-dollar contract Ericsson signed with Telstra to build its Next G network.