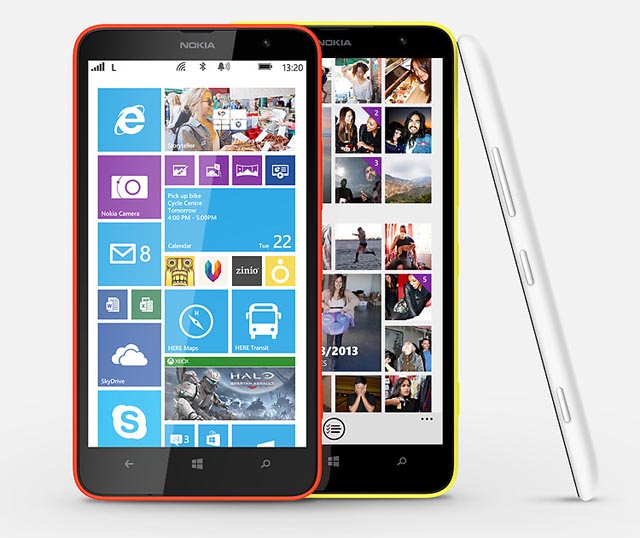 news Finnish smartphone vendor Nokia this week revealed it would in February launch its new Lumia 1320 handset in Australia, which it is billing as introducing many of the high-end features and bold colours Lumia has become known for in an affordable six inch large-screen smartphone.

The 4G-enabled Lumia 1320 will be available from Telstra and Vodafone, or for outright purchase through Harvey Norman and leading retailers from 4 February, with a recommended retail price of $449, placing it in competition with low-priced but powerful models such as Google’s Nexus 5.

The smartphone’s screen is a 6″ HC LCD IPS screen running at a resolution of 1280×720 and protected by Corning’s Gorilla Glass 3 material. The Lumia 1320 comes with a five megapixel main camera that can shoot 1080p video at 30 frames per second. Its front camera is a 0.3 megapixel ‘VGA’ camera, and its CPU is a dual-core Qualcomm Snapdragon 400 model running at 1.7GHz. It comes with 1GB of RAM, 8GB of internal user memory and support for a microSD card with up to 64GB of additional storage.

Powered by the latest version of Windows Phone 8 including the Nokia Lumia Black update, the Lumia 1320 has been designed with “productivity in mind”, according to Nokia. Microsoft Office comes built-in, plus its additional screen real-estate and a third column of enhanced live tiles means users can see more of their calendar, email, notes and music at-a-glance.

The Nokia Lumia 1320 offers consumers unlimited free music without ads or sign-on, as well as access to the HERE Maps, DRIVE and Transit apps which are proprietary to Nokia.

However, the company’s strategy does not appear to see it making significant ground against dominant smartphone vendors such as Apple and Samsung in the Australian market.

opinion/analysis
Yet another Nokia phone which isn’t going to go anywhere. The vendor needs to focus on cutting down its ballooning smartphone line. I’m a professional technology journalist and have reviewed dozens of smartphones. Yet even I couldn’t tell you at a moment’s notice right now which Nokia model you should buy if you’re interested in one. With Android it’s easy — you should buy the Nexus 5, the Galaxy S4, the HTC One or the Galaxy Note 3. With Apple it’s easy — you buy the iPhone 5S or the iPhone 5C.

With Nokia it’s almost impossible. The company appears to have at least half a dozen different models on the market at any time — all with arcane numbers identifying them. How the hell is the average consumer supposed to know the difference between the Lumia 1320 and the Lumia 1520? Beats me.