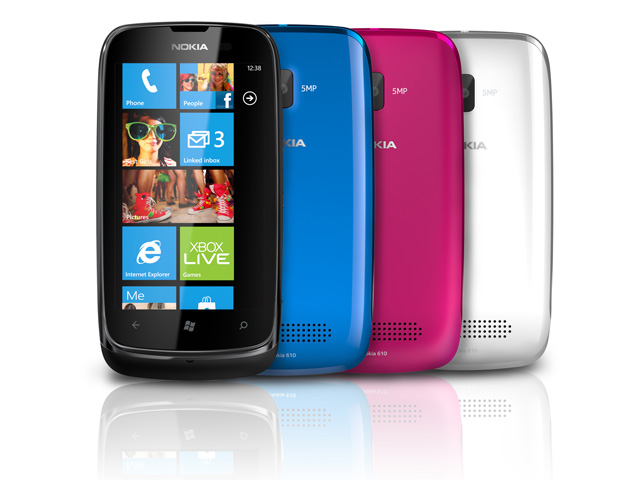 review With a 3.7″ screen, an 800Mhz single-core CPU and 256MB of memory, the 610 is the baby of Nokia’s flagship Lumia series of Windows Phone 7 smartphones. But it’s also the cheapest, and not everyone needs or wants a high-powered, large-screen mobile in their pocket. Does the Lumia 610 do enough for the money? Read on to find out.

Design
To our mind, something in the design of the Lumia 610 harkens back more to Nokia’s older line of popular business smartphones (one example would be its E-series) than its newer Lumia line. Some of this comes from the 610’s overall shape. The model is a bit curvier than the Lumia 800 or Lumia 900, and a bit more rounded around its edges and on its back. In addition, its size (at 119mm by 62mm by 12mm) is smaller than the other models in the range, and more comparable to some of the models in Nokia’s past, which were designed more for efficient single-hand physical keyboard use than to accommodate large touchscreens.

In addition, from some of Nokia’s older models (at least in our memory), the Lumia 610 takes a soft plastic removable shell for the back of the phone. We’ve always found this kind of material lovely on the finger, and we’re pleased that it is present on the Lumia 610. You won’t find this material on the rest of Nokia’s Lumia line, which generally feature a harder, glossy polycarbonate finish. That same harder polycarbonate backing is available for the Lumia 610 in a variety of colours (see the publicity shot above, for example), but in the hand we preferred the more grippy matte black plastic on our review model.

The colourful polycarbonate is, however, integrated into the front and sides of the Lumia 610, in a nod to its brethren in the Lumia line. In general, with the 610, it’s almost as if Nokia wanted to take inspiration from its past but still keep the model as part of its Lumia range. Perhaps we’re stretching, with this speculation, but overall, we like this approach a lot.

The rest of the design of the 610 is pretty self-explanatory. On the right-hand side of the device are its function keys — a camera key, the on/off button and the volume rocker. On the top sits a micro-USB port for charging and connecting the smartphone to a PC, alongside a 3.5mm audio jack. Below the screen, which swims in a sea of deep black, sits the normal three Windows Phone capacitive buttons.

Features
The Lumia 610’s features are pretty much what you would expect from an entry-level smartphone in mid-2012. The screen is a 3.7″ WVGA model running at the Windows Phone 7-mandated resolution of 800×480 pixels, the processor is a single-core 800Mhz Qualcomm Snapdragon model, there’s 256MB of memory and 8GB of storage, a five megapixel camera capable of capturing VGA-quality video at 30 frames per second, and the normal Wi-Fi and Bluetooth 2.1 support is present as well as support for the HSDPA 3G standard, with speeds available up to 7.2Mbps. The operating system is Windows Phone 7.5 (‘Mango’).

As with other models in its Lumia line, Nokia has also bundled in a number of major Nokia-developed applications not included by default in Windows Phone 7. These are Nokia Drive, which is a GPS navigation system for driving, Nokia Maps, which is pretty much like Google Maps (but appears a bit slicker in its level of detail transitions), and Nokia Music, which is a streaming music service and music store. There are also a few smaller apps such as App Highlights, which suggests applications for the reader.

All of these features are sub-par compared with higher-end modern smartphones. You can get a bigger screen, a better resolution, a better processor, more memory, more storage, a better camera and better networking support (such as DC-HSPA+ and 4G, for example). And of course even the Windows Phone 7 operating system has some deficiencies when it comes to third-party application support, compared with industry front-runners iOS and Android.

Performance
Overall, we were pretty pleased with the Lumia 610’s performance. If you were to buy an entry-level smartphone only a few years ago, you would expect such a model to be quite slow and to not be able to do basic tasks well such as web browsing, taking decent photos, playing games and so on.

However, it’s our opinion that in general, featuresets are starting to matter less and less on modern smartphones. The difference between the 800MHz single-core processor found on the Lumia 610 and the 1.4GHz model found on its big brother, the Lumia 900, for example, doesn’t translate into much in the way of performance losses in real life. Most applications perform in a zippy fashion on the Lumia 610, especially the basic functionality included as part of Windows Phone 7.

There are some processing power/memory issues. For example, it was recently revealed that the 610 can’t run a number of high-performance mobile apps such as the popular Angry Birds Game, IP telephony software Skype, and a few others. Is this a big deal? It depends on your usage. I would definitely find it to be an issue, but then I’m a high-performance user of smartphones and tend to use them to their full capacity. For others, the fact that their smartphone won’t play the latest and greatest video games is nothing more than an irrelevance.

We were also pleasantly surprised by the camera on the Lumia 610, which continues Nokia’s tradition of featuring excellent photography hardware on its smartphone. While the shots won’t wow anybody as our demonstrations of the camera on HTC’s latest One XL model have our friends and family, and they’re not as polished as those taken by the Lumia 900 which we recently reviewed (which features Carl Zeiss optics), the photos taken by the Lumia 610 were more than serviceable, even in low-light conditions. Again, this is an area where featuresets are becoming less important, as megapixel ratings don’t tell the whole story about a camera’s potential. It’s more about the overall quality of the camera concerned, and in the Lumia 610’s case, that model is pretty decent.

Battery life was also better than we expected, given the 1300mAh model used. One of our favourite battery life tests for smartphones is to charge them fully, then leave them on our desk for two to three days. Some high-end smartphones, such as the HTC One XL, will run out of juice during this period. But the Sony Xperia Sola we reviewed yesterday survived this test, and Nokia’s Lumia 900 did even better.

On this spectrum, the Lumia 610 didn’t last as long as the Lumia 900 — we found it dead several times during our review period when we didn’t expect it to. But it’s also not a juice sucker like the One XL. It’ll easily go a couple of days between charges, less if you’re viewing high-end video on the device or using the processor or 3G connection intensely for other tasks.

Speaking of video, we were also quite impressed with how the Lumia 610 plays HD video from sources such as YouTube. The screen quality is good, with a clear display and vivid colours, and Windows Phone 7’s 800×480 resolution restriction is less of an issue on smaller screens such as the Lumia 610 has — you can’t see the pixels as easily. Sound quality, whether with headphones or the Lumia 610’s built-in speaker, is adequate as well.

Conclusion
To be honest, we find it a little hard to recommend the Nokia’s Lumia 610 at the moment, even for those who are looking for a budget smartphone which will still do more of what higher-end models will. The reason is the price. You can buy the Lumia 610 for $299 at the moment from mobile retailer Mobicity, which is about as cheap as you’re going to see this model go for.

But for just $20 more, you can pick up the Lumia 710, which comes with a more powerful CPU, and for $50 more it’ll support Telstra’s Next G network, which is the network we currently recommend. In addition, if you spend just $129 more you’ll be able to pick up Nokia’s much more powerful Lumia 800 on Next G. And at that stage you start getting into the range of a bunch of awesome Android smartphones and perhaps even older models of Apple’s iPhone.

In our opinion, it’s not worth compromising on mobile phone performance for a couple of hundred dollars. Amortised over an 18 month to two year period, which is the length of time most Australians keep each mobile phone, this is a tiny amount. We recommend looking at smartphones in the price range above $400 at least if you’re looking to buy one today. If you’re prepared to spend up to $500 you can get an awesome model which will last the distance a lot better than the Lumia 610.

Having said all that, the Lumia 610 does what it promises to do pretty well. For such a small and cheap model, it’s got a very high build quality, as Nokia smartphone usually do, and its performance is a bit better than its low-end specs would have you believe. As is usually the case, Nokia continues to punch above its weight.

Other reviews of the Lumia 610 we liked: CNET.com.au, PC World Australia, The Verge.