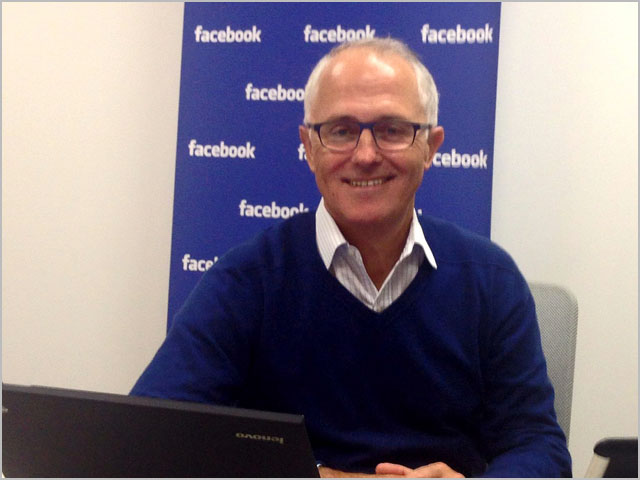 news An attempt by Malcolm Turnbull to leverage a visit to Facebook’s headquarters in the US to communicate with Australians about the future of the digital economy via social media has backfired, with the Communications Minister’s official Facebook filling up with hundreds of comments slamming the Coalition’s inferior broadband policy.

Yesterday Turnbull, who is currently on a study trip to the US meeting with top executives from US technology giants such as Twitter, Facebook, Google, Cisco and Square, posted a notice on his Facebook account that he would be hosting an online questions and answer session with Australians from Facebook headquarters in Menlo Park on “the latest in technology and the future economy”.

However, the overwhelming majority of the several hundred questions posed to Turnbull during the session related to the Coalition’s broadband policy, which most Australians believe is inferior to Labor’s more comprehensive and popular National Broadband Network vision.

“Why are you so near-sighted on the NBN scheme? Does this stem from your generational lack of understanding/inability to use IT to the capacity of everybody else? NBN concerns me. We NEED a world class system. Are you going to help deliver this?” asked one reader.

Another alleged that the majority of NBN Co’s board was composed of former Telstra executives, and asked whether Turnbull believed it was “wise” that NBN Co was negotiating with Telstra for the sale of the copper wiring, which they described as “an outdated method of communication that their own CEO referred to as ‘5 minutes to midnight’ ten years ago and is currently held together in water-logged plastic bags”. “Shouldn’t an independent committee, with no relation to Telstra, be negotiating the deal?” the questioner asked.

Another questioner asked: “The future of the internet is not about movie download speeds, but in machine to machine communication that will require a “smart” network able sometimes to deliver terabytes in nanoseconds, and where symmetry is vital. In that context, why are we even considering basing national broadband infrastructure on platforms that we know cannot do these things? what is the expected cost of repairing the [plain old telephone system] to deliver even the inadequate network currently planned? and won’t this spend inevitably be duplicated?”

And still another asked: “An assumption made in your costings for the NBN prior to the election was that Telstra would allow use of their copper network without charge and now it has been reported that the government/NBNCo will now enter negotiations for use of the network. Will this be another riveting surprise from the self-proclaimed no surprises government?”

Some commenters verged on alleging improper behaviour by the Coalition. “How much did Murdoch pay you to slow down our broadband development so that Foxtel could build its on demand feature and offer home and internet so that Netflix didn’t kill it off?” asked one questioner.

And the NBN wasn’t the only issue where Turnbull faced censure from his critics. One questioner pointed out that Australian software firm Atlassian had confirmed plans to shift its headquarters from Australia to the UK because of more favourable regulatory and financial conditions, and asked what the Coalition Government was going to do to attract innovative startups to establish themselves in Australia.

In general, Turnbull responded to the questions by referring to the Coalition’s broadband policy or NBN Co’s Strategic Review, or by disagreeing with the assertion of the question, by making a joke or attacking Labor’s NBN policy. For example, the Minister said it was a “low blow” to refer to what a questioner said was a “generational” lack of understanding about IT on his part.

“Those assumptions are not right”, said Turnbull, in response to a question about the need for symmetrical speeds to be available on future broadband networks. In respect to the question about Atlassian, Turnbull said the company’s “move” was exaggerated, and that he had a keen interest in encouraging innovative companies in Australia. However, the Minister stopped short of committing to any specific approach to addressing the issue.

With respect to Labor’s FTTP model for the NBN, Turnbull said “the idea that you would invest in a technology which will last for thirty years is pretty naive”, and said it was better to invest in technology “that works now” and upgrade as time went on.

The Facebook Q+A is not the first time Turnbull has been sharply attacked on social media by Australians angry about the Coalition’s broadband policy. In November, for example, a video attempt by Turnbull to reassure the public that the Coalition was proceeding apace with Labor’s National Broadband Network project backfired, with most viewers giving the promo the ‘thumbs down’ and others filling the Communications Minister’s YouTube channel with bile accusing him of destroying Labor’s vision wholesale.

The comments reflect ongoing support amongst the Australian population for Labor’s FTTP-based NBN model, and concern that the Coalition’s preferred FTTN model will not deliver the same service delivery outcomes to Australians. Despite the poor rollout performance of the NBN rollout under Labor, a series of polls over several years has constantly shown that the majority of the Australian population supported Labor’s NBN project.

Since the Coalition won the Federal Election in September, a wave of popular dissent against the Coalition’s plans to reshape the project has surfaced, with a number of initiatives under way to petition the Coalition to back Labor’s policy instead of its own.

A petition placed on popular website Change.org on the issue following the election, demanding the Coalition reconsider the FTTN technology and focus on the superior FTTP option, garnered in excess of 270,000 signatures.

In November, supporters of Labor’s all-fibre vision for the National Broadband Network project organised a national day of action on the issue, which saw thousands of Australians physically present Members of Parliament with copies of the petition. Supporters also raised tens of thousands of dollars for a pro-NBN advertising campaign in Turnbull’s local newspaper.

Before Christmas, respected telecommunications analyst Paul Budde heavily criticised the Coalition’s new preferred broadband deployment model, describing its “Multi-Technology Mix” approach as “a dog’s breakfast” of different technologies, which could turn out to be a “logistical nightmare” to deliver in practice.