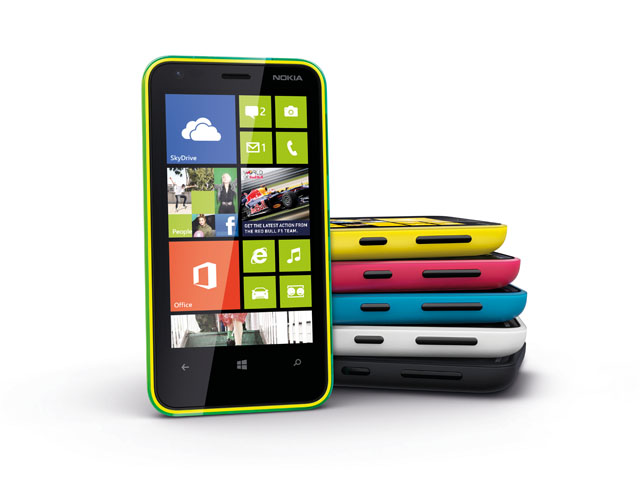 review If you’re in the market for a Nokia smartphone at the moment, you’re likely feeling dazzled — by both choice and colour. The Finnish company’s latest low-end opus is the Lumia 620, going for prices as low as $259. But does this lesser model in Nokia’s range sacrifice too much power for its cheaper price? Read on to find out.

Design
If you’re familiar with Nokia’s recent design choices on its Lumia handset range, then you won’t be surprised to find many of those same design choices present in the 620. You get the same high-end plastic feel from its case, the same standard Windows Phone operating system buttons, and of course, the same vibrant colour options — the 620 can have white, green, blue, yellow and red case options, and the back case is removable, so you can pick the colour which suits you.

On the right-hand side of the unit sits the normal three Windows Phone buttons — a volume rocker, an on/off button, and a dedicated camera button, while a micro-USB port on its bottom does charging/synching duties, and a 3.5mm headphone jack at the top provides audio. There’s also a small speaker set into the phone’s back, and its camera is, of course, in the normal place. The 620 measures 115.4mm by 61.1mm, and it’s 11mm thick. It weighs 127g.

All of this is fairly standard. So what’s new here?

Probably the most comparable model to the 620 is the 610, which went on sale in Australia in mid-2012. In Delimiter’s review of that model, we were pretty positive, seeing the 610 as a well-put-together little unit that was, nevertheless, a little hard to recommend on a pricing basis (given the fact that more powerful Nokia models were available for just a little more).

Features
As with all entry-level phones, the 620 has quite a few watered down features compared to higher-end models. For starters, its main camera is only five megapixels, and its display size is relatively small by today’s standards, at 3.8″ (although we can’t be too hard on Nokia for this; the popular iPhone 5 has only a slightly larger display at 4″). The 620 has a relatively poor display resolution of 800×480, meaning you get a pixel density of about 246PPI, and its CPU is a dual-core 1GHz Snapdragon S4 model from Qualcomm.

The model comes with 512MB of RAM, 8GB of storage space, and it can take a microSD card of up to 64GB. Predictably, it doesn’t do 4G/LTE, but you will be able to get up to 21.1Mbps speeds out of it through HSDPA, which is supported in Australia in many areas through the major operators. It does have an NFC chip, which is a nice extra, if you can find a way to use it in Australia.

The other major new feature which the Lumia 620 introduces is Windows Phone 8. Microsoft’s new mobile operating system features a slew of new and long-awaited features, ranging from multi-core CPU support, to a resolution bump (1280×768 or 1280×720 — although the 620 doesn’t support this), the ability to support microSD cards, NFC chip support, Internet Explorer 10, a Wallet feature for storing debit/credit cards, coupons and boarding passes and better maps and directions (through integration of Nokia’s maps feature). Most of these features were already available through Apple’s iOS and Google’s Android platforms, and Windows Phone users have been waiting them for a long time for the Microsoft platform. We’re very glad to see them arrive.

In addition, as this is a Nokia Windows Phone smartphone, you get the normal customised Nokia apps bundled with it — Nokia Music, Maps, Drive and so on. To our mind, these apps really do give Nokia an advantage over other Windows Phone vendors, given the fact that even Windows Phone 8 is still lacking in some areas compared with iOS and Android.

Let’s be honest here. If this review was being written only a couple of years ago, all of these features would be awesome. However, in early 2013, with quad-core and even eight-core smartphones on the market with 8 megapixel cameras, LTE support, 5″ 1080P screens and incredible pixel density ratings out there, the 620 just doesn’t shine.

This isn’t necessarily a bad thing, however; as the 620 isn’t designed to compete with the big boys. It’s designed to provide relatively comparable features at a much lower price. And on this benchmark, the 620 succeeds admirably.

Performance
To put it bluntly, there’s a lot to like about the 620’s performance.

We’ve been making the argument for some time that for almost all applications, CPU performance is ceasing to matter in smartphone-land, and the 620 demonstrates this phenomenon perfectly. This is an entry-level phone at a cheap price that — like other entry level models such as the Kogan Agora — is perfectly capable of pulling off basically anything that you’ll be able to throw at it. Windows Phone games just aren’t a problem, and neither is playing HD video. The audio quality of the 620 is also very decent for a smartphone of this level, and network access speeds are as expected.

The 620’s camera is also quite decent. We’ve reviewed a few five megapixel smartphones over the past several years, and we’re comfortable saying that the model on the 620 is near the top of the range, if not at the top. Nokia is well-known for the camera quality in its smartphones, and the 620 is no exception. We particularly liked the vivid colours the 620 was able to pick up. Of course, the camera struggles when compared to industry-leading models found on phones such as the iPhone 5, the Lumia 920 and so on, and it’s a rough fight with even the normal eight megapixel shooters found on most every modern smartphone of other persuasions, but that’s to be expected. It was a similar situation with video, but its worth noting here that we liked the 620’s audio pickup capabilities.

Battery-wise, you’re going to get a pretty decent deal from the 620. Its 1300mAh model will normally last you through two days, and it’ll retain some juice over most of a week if you leave it on your desk unattended. This is better than most battery-sucking smartphones in 2013, so we’re happy to give the 620 a pass mark in this regard. Of note, however, is that the 620 does not support wireless charging as some of Nokia’s other models do.

However, if you are in the market for a colourful smartphone at a very cheap price (online retailer Mobicity has the 620 starting at just $259) that has most of the features and power that much more expensive phones have, then we think you’ll find it very hard to go past the Lumia 620. This is just a great model — powerful, feature-rich and very performant, at a bargain basement price. Even if you’ve never used Windows Phone before, if you’re in the market for an entry level smartphone in Australia, we recommend you check the 620 out. In its category, it’s a winner and an absolute bargain for what you get.

Other reviews we liked of the Lumia 620: Engadget, PCWorld Australia, CNET.