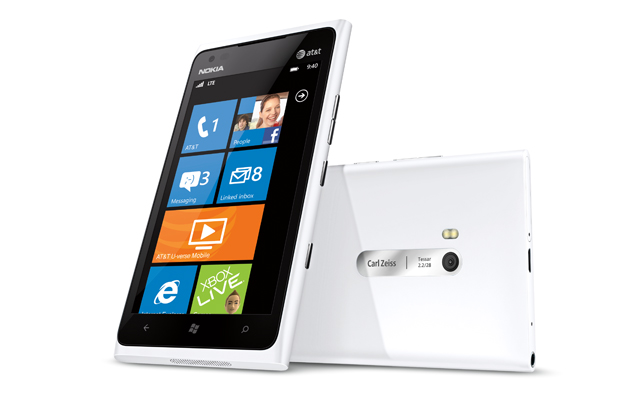 review With its stellar build quality and solid featureset, the Lumia 900 is the king piece in Nokia’s attempt to win back ground lost in the ongoing smartphone wars to rival Android manufacturers and the iPhone. But does this eye-catching model do enough to overcome the limitations of its Windows Phone 7 platform? Read on to find out.

Design
Delimiter reviews of other models in Nokia’s recent handset range (the Lumia 800, for example, or the N9) have consistently praised their fantastic design and build quality. And in this respect, the Lumia 900 continues to impress. As soon as you pick up the Lumia 900, you’ll reminded of everything you love about well-designed consumer electronics gadgets. The principle reason for this is the handset’s colourful unibody polycarbonate casing, which was introduced with the N9 and Lumia 800. It returns for the Lumia 900, and it’s as wonderful to touch as ever.

It’s hard to emphasise how nice in the hand this polycarbonate casing feels. The material feels like quality plastic; with a quality of softness yet still firm; shiny but still grippable. Nokia has included rounded edges around the sides of the casing, and there are no sharp or uncomfortable bits for your fingers to get caught on. Once you start fondling the Lumia 900, you simply do not want to put it down.

The colours of the Lumia 900 are also striking. Smartphone buyers have gotten used to buying handsets in black and silver (hello, Apple), grey and black (hello, HTC) and a variety of other black and grey colours (most of the other manufacturers). But with its Lumia range, Nokia has truly broken the mould. In Australia, it also comes in a lovely off-white as well as black, and there’s a cyan colour available internationally if you import.

The rest of the Lumia 900’s design is also as striking and subtle. Its back camera floats alone as a dash of silver in a sea of colour, while its deep black front 4.3″ display contrasts markedly with the rest of its casing colour. Below the screen sits the three normal Windows Phone 7 buttons — back, the Windows key, and search.

On the top of the Lumia 900, in absolutely the most logical spot, sits is 3.5mm headphone jack, alongside a micro-USB port and the SIM card slot. On the right-hand side are volume controls, the on-switch and a dedicated camera button. On the bottom is a speaker grill, while on the left-hand side of the phone is, pleasingly, nothing.

Reviewer Jenneth Orantia wrote in her review of the Nokia N9, which features a very similar design to the Lumia 900, that it was “the best-looking smartphone” she’d ever seen. We agreed then, and now there is a new champion; the N9’s big brother, the Lumia 900. This is simply the best-looking smartphone available. Its design is stunning and it feels wonderful in the hand.

Features
As you would expect from Nokia’s top-end model, the Lumia 900 is no slouch when it comes to its featureset (full specifications here), although there are some notable caveats.

At its core the Lumia 900 runs a 1.4GHz single core CPU, with 512MB of RAM. It comes with 16GB of internal storage space, and it has a 4.3″ AMOLED screen, which is large but not overly so by today’s standards. Its primary camera is an eight megapixel model with Nokia’s special Carl Zeiss-branded optics (which usually deliver fantastic results for Nokia), and it comes with dual LED flash and auto-focus. Its front camera is a one megapixel model for video calling, and it runs the latest 7.5 version of Windows Phone 7 (code-named ‘Mango’). It supports the usual array of Wi-Fi, Bluetooth and GPS support, and will shoot video at 720p at 30 frames per second.

Nokia has also bundled in a number of major Nokia-developed applications not included by default in Windows Phone 7. These are Nokia Drive, which is a GPS navigation system for driving, Nokia Maps, which is pretty much like Google Maps (but appears a bit slicker in its level of detail transitions), and Nokia Music, which is a streaming music service and music store. There are also a few smaller apps such as App Highlights, which suggests applications for the reader.

However, not all of the Lumia 900’s features are as strong. For starters, although its screen is lovely, large and clear, with great colours and deep blacks, it only runs at a resolution of 800×480, owing to Microsoft’s standards set for Windows Phone 7. Considering that competing handsets such as HTC’s One X/XL models have a resolution of 1280×720 for their 4.7″ screen size, you can see that Nokia has a bit of catching up to do in this regard.

The Lumia 900’s network speeds are also not up to scratch with competing handsets. The XL supports 4G speeds on Telstra’s Next G network, and we’ve regularly achieved download speeds of up to 35Mbps, but the Lumia 900 doesn’t support 4G in Australia. It does do the next best — supporting the HSPA+ dual-carrier standard, which theoretically allows speeds of up to 42Mbps. Telstra’s non-4G network does theoretical speeds of between 1.1Mbps to 20Mbps. We suggest in practice users on DC-HSPA+ will usually see speeds quite a bit below 20Mbps and often below 10Mbps, and bear in mind that dual-carrier support is not available in all areas. Lesser performance is usually seen on the networks of Vodafone and Optus than on Telstra’s Next G network.

One last factor: Microsoft will release Windows Phone 8 (the next version of its Windows Phone platform) later in 2012. It is currently believed the Lumia 900 will not support this release, severely limiting its longevity.

Performance
There are several ‘hero’ facts you should know when it comes to the performance of the Lumia 900. Firstly, both its eight megapixel back camera and its one megapixel front-facing camera are very strong. We used the eight megapixel model to take a variety of photos in both low light (in fact, in the middle of the night) and during the day, and found it very hard to fault the Lumia 900’s photography skills.

Nokia has long had strong camera credentials courtesy of its partnership with lens manufacturer Carl Zeiss, and the Lumia 900 delivers in this area, even above the very strong camera found on HTC’s X/XL, for example, and at least on par with the model found on Apple’s iPhone 4S. We were surprised with how well the Lumia 900 handled low-light conditions, and the front-facing camera was also one of the best we’ve found on a smartphone.

Secondly, the user interface is absolutely stellar. We’ve reviewed various Windows Phone 7 devices over the past year, but none has really compared with the tight hardware/software integration on Nokia’s Lumia line, and the Lumia 900 is the best example of this. Just moving around the operating system, opening and closing applications was a lovely endeavour — everything was fast, seamless, and just flowed, even when you’re doing things like loading HD videos from YouTube or running intensive applications.

We feel that with Nokia’s Lumias, Windows Phone 7 is coming into its own. You really notice the difference when you move from using an Android or iOS-based phone to the Lumia 900. It’s so much more smooth and things flow so much more. This is a hard effect to detail until you see it in practice; but it’s there.

Battery life on the Lumia 900 was also strong. One of our favourite battery life tests for smartphones is to charge them fully, then leave them on our desk for two to three days. Some high-end smartphones, such as the HTC One XL, will run out of juice during this period. But the Sony Xperia Sola we reviewed yesterday survived this test, and Nokia’s Lumia 900 did even better. You’ll be able to leave the Lumia 900 untended on your desk for the better part of a week before it will run out of battery completely, unlike many high-end smartphones we play with these days.

Nokia says the Lumia 900 has a maximum video playback time of eight hours, and we have no reason to doubt this, given the performance we witnessed. It also re-charges pretty fast. This is not one of those smartphones which will perennially be running out of battery life at the wrong time, although it’s also not quite as long-lived as some smartphones in the market. Overall it’s in the mid-range, which for a high-end smartphone is actually pretty good.

Conclusion
To be honest, we are quite torn about the Lumia 900.

On the positive side, the handset has the best design of any smartphone currently on the market in Australia, and its build quality is also amongst the best on offer. Its cameras are awesome, and its battery life is better than most of its high-end rivals. In addition, its slick user interface is one of the best implementations of Windows Phone 7 we’ve seen so far. This is a smartphone which is lovely to use and which your friends, family and colleagues will want a closer look at.

But on the other hand, it’s very hard to recommend a high-end smartphone without 4G in mid-2012, given how congested Telstra’s 3G network has become in some CBD areas, and how fast and pervasive Telstra’s 4G network is becoming. In addition, there’s the low 800×480 screen resolution and the limitations of Windows Phone 7, which is currently coming a distant third in terms of third-party app support and first-party feature completeness to rivals iOS and Android. And, of course, it is doubtful whether the Lumia 900 will support Windows Phone 8, which is only a short time away.

If the Lumia 900 was a 4G smartphone, we would consider it a very strong competitor to be Australia’s current best high-end smartphone, HTC’s One XL. Without it, it’s still a fantastic handset. But it drops down to the next rung of competitors without 4G — namely, Apple’s iPhone 4S, the Samsung Galaxy S III and the HTC One X (which doesn’t support 4G). Like it or not, given today’s mobile network conditions, the rollout of 4G support in Australia is a game changer, and mobile handset manufacturers ignore that fact at their peril.

When it comes to the Windows Phone 7 ecosystem in Australia, the Lumia 900’s main competition comes from existing Nokia models such as the Lumia 800, with which it shares many features, and HTC’s Titan 4G, which does support 4G speeds. Despite its 4G support, given the Titan’s lesser build quality and battery life, we have no hesitation recommending the Lumia 900 over it as Australia’s current top Windows Phone 7 handset. It is just that much better.

To sum up: The Lumia 900 is a fantastic smartphone, and one of the best on the market. We’d like to see 4G speeds from Nokia soon in this same great hardware package; perhaps combined with Windows Phone 8, a better screen resolution and a dual-core CPU. When that happens, we believe Nokia will have an incredibly strong offering on its hands. And by its hands, we mean our hands, because we would have a very hard time stopping ourself from buying one. Your reviewer just swapped out his iPhone 4 for a HTC One XL. In 12 months’ time, will we be swapping to Windows Phone 8 with Nokia? At the moment, it’s looking quite possible.

Other reviews we liked: The Verge, CNET Australia, Engadget.