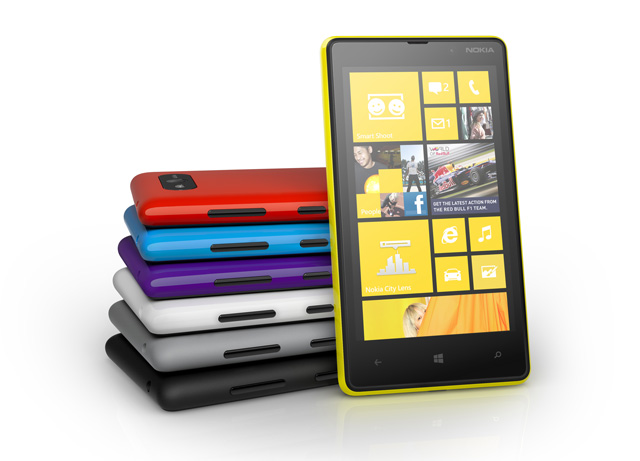 review When it comes to Lumia handsets, the 820 is merely the middle sibling of the family, sandwiched between the larger and more powerful 920 and lesser models such as the 620. But if the truth be told, Nokia hasn’t actually sacrificed much on paper with the 820, and it shares many of the specifications — including support for 4G — as more expensive models. How does the Lumia 820 perform in the field? Read on to find out.

Design
If you’ve seen one Lumia in 2013, you’ll have a good idea how the rest are going to look and feel, and the Lumia 820 is no odd-one-out in this trend. You get the same black front with the same Windows Phone buttons below and front-facing camera above the handset’s large and lush touchscreen, the same fluoro plasticky casing on the back of the handset, and the asme three buttons on its right-hand side — a volume rocker, an on/off button and a dedicated camera button.

The same micro-USB port for charging and synching is on the 920’s bottom, and the same 3.55mm headphone jack is on top. The main camera and flash are on the back, and as per normal they’re Carl Zeiss branded. Yes, the Lumia 820 is definitely a Lumia and it’s definitely a Windows Phone.

There is one main difference between the 820 and the most directly comparable model in Nokia’s line-up, the Lumia 920. The 920 features a polycarbonate unibody casing which you can’t remove, while the 820 features a somewhat cheaper-feeling plasticky casing which can be replaced with a variety of colour options — red, yellow, white, blue and black. The review model we trialled used the white option.

In terms of its overall size and weight, we were quite happy with the Lumia 820. It measures 123.8mm by 68.5mm and is 9.9mm thick, and weighs 160g. This is definitely on the heavy side by a few dozen grams for a modern smartphone and we’ve also seen thinner models out there.

However, the Lumia 920 feels perfectly sized and weighted for the hand — especially if you have medium to small sized hands. Not everyone is a fan of the 4.7″ and 4.8″ screens found on larger models such as the Samsung Galaxy S III and HTC One XL, and for those people the 4.3″ screen and moderate profile of the Lumia 820 will probably feel quite nice.

The plasticky back is definitely a little less quality than the case found on the Lumia 920, but we’d have to say that on every other benchmark the 820 has its big brother beat, design-wise. It’s smaller but not too small, it’s lighter, and it just feels more comfortable in the hand — more like an actual smartphone and not something that’s trending towards a “phablet”. We do like the way the Lumia 920 feels in the hand — but the 820 is a better fit, in our opinion.

Features
The Lumia 820’s featureset is generally very good, although there are a couple of areas where it disappoints.

Firstly, the good news. The 820 isn’t Nokia’s top-range Lumia, but it does support the 4G networks operated in Australia by Telstra and Optus. This is very good news indeed, as we currently find it hard to recommend buying a smartphone without this functionality. The processor is a speedy dual-core Snapdragon S4 model running at 1.5GHz, and all of the normal Wi-Fi protocols are supported, up to 802.11n. The graphics processor chip is an Adrendo 225 model.

The camera is an industry standard eight megapixels and it can also shoot 1080P video at 30 frames per second, while the front-facing camera is a VGA model. 1024MB of RAM is included. And one hero feature which we know many users will love is the ability to remove the 820’s back plate and insert a microSD card (up to 64GB) and replace the battery.

In addition, as with previous Lumia handsets, Nokia has included its own specialised applications with the Lumia 820 – for example, its excellent mapping application, as well as its Music Store, and so on. These applications do add some value and help differentiate the company’s handsets from other Windows Phone rivals.

The other major new feature which the Lumia 920 introduces – and one of its key selling points – will be Windows Phone 8. Microsoft’s new mobile operating system features a slew of new and long-awaited features, ranging from multi-core CPU support, to a resolution bump (1280×768 or 1280×720), the ability to support microSD cards, NFC chip support, Internet Explorer 10, a Wallet feature for storing debit/credit cards, coupons and boarding passes and better maps and directions (through integration of Nokia’s maps feature). Most of these features were already available through Apple’s iOS and Google’s Android platforms, and Windows Phone users have been waiting them for a long time for the Microsoft platform. We’re very glad to see them arrive.

And now for the disappointing parts.

The worst aspect of the Lumia 820 is probably its resolution. Windows Phone 8 brought with it new supported resolutions up to 1280×768, but the Lumia 820 doesn’t support them — instead, it’s still at the 800×480 resolution of the previous generation. This means the handset gets a screen pixel density rating of about 217 PPI — lower than many handsets on the market and probably enough to turn some buyers off. You’ll also likely need that microSD card, as the 820 only comes with 8GB of on-board space, and in addition, the 820’s battery isn’t rated that highly, at 1650mAh.

Performance
In practice, the Lumia 820 performed very well. The handset’s camera doesn’t feature the advanced image stabilisation technology included with the Lumia 920, but it still takes more than serviceable shots. At the moment, out of all the smartphones we’ve tested recently, we prefer the cameras on the Lumia 920 and the iPhone 5. The Asian manufacturers (HTC, Samsung, LG etc) are just a little behind, in our opinion. The Lumia 820’s camera is about on par with the cameras found on high-end models such as the Galaxy S III and HTC One XL — it’s a rung down from the iPhone 5 and the Lumia 920 — but that’s actually still a very good place to be for a mid-range phone.

These shots were all taken on the same day at the same time, and then resized and saved as mid-range quality JPGs in Photoshop, as we do with all our shots. Click for a closer view. You can see that the iPhone 5 clearly takes the best shot, with the Kogan Agora (which we also have in for testing at the moment) taking the worst, and the Lumia 920 in the middle. 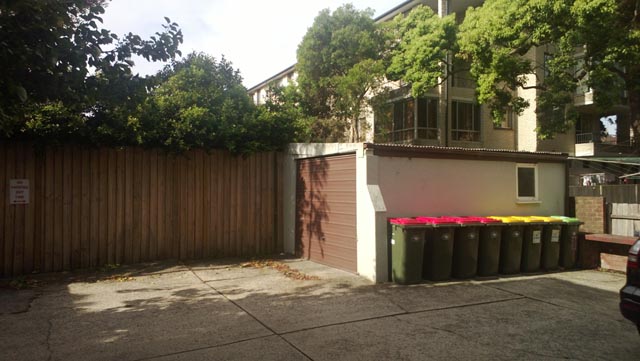 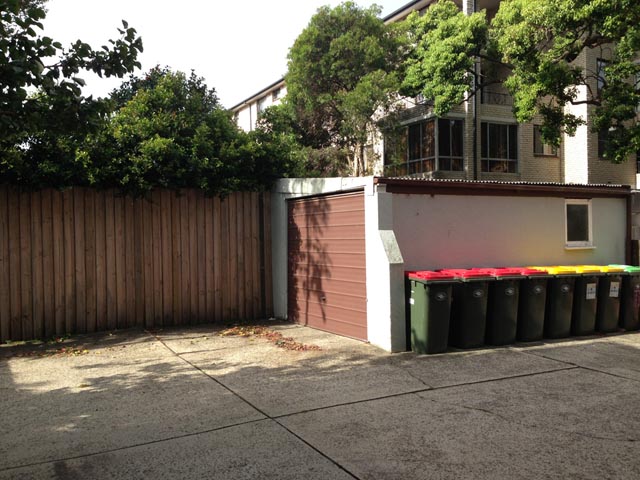 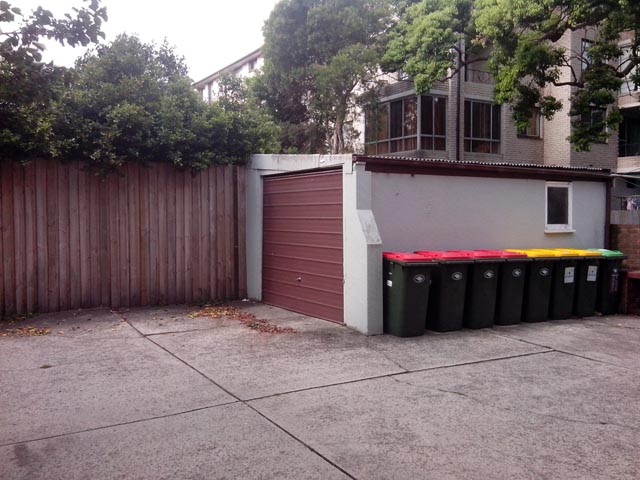 Similarly, while the screen resolution of the Lumia 820 isn’t fantastic, it still features a lovely vibrant and rich experience. You can definitely see the difference in pixel density between this model and others if you look closely, but it’s not as huge a problem as many people probably think.

One issue with the Lumia 820 is its battery life. To put it bluntly, it’s not fantastic — you’ll probably end up charging it at the end of each day of moderate use, which we don’t consider ideal. Sure, all 4G smartphones have a few battery issues at the moment (even the iPhone 5), but we still think Nokia has a bit of work to do in this regard. Windows Phone 8 appears to suck battery juice a bit more in general than Windows Phone 7. The Lumia line has previously done pretty well when it comes to battery life with Windows Phone 7. You’ll need to be a little more careful with Windows Phone 8.

Conclusion
The Lumia 820 is a very solid smartphone, and represents less of a mid-range model than a slightly smaller and slightly less powerful version of Nokia’s current flagship, the Lumia 920. With this in mind, we highly recommend it to those who want a Nokia Windows Phone smartphone but don’t want a 4.7″ monster. The size and specification list of the Lumia 820 make it a very strong performer.

However, we’d also ask you to question, at this stage, whether you should actually be buying Nokia at all. In the 4.3″ screen size, you can also get HTC’s excellent Windows Phone 8X model, which is comparable to the Lumia 920 in almost all respects (including 4G support), but has a much better screen resolution, larger on-board storage, a lighter weight, and, we’d argue, a better overall design, with its unibody casing. It doesn’t come with a microSD card, but in general we like the Windows Phone 8X a lot more than the Lumia 820.

Of course, there’s also the question of why you’d go for a Windows Phone smartphone at all. We like the options from Apple, HTC and Samsung better at the moment on a pure comparison basis than we do the Lumia 820, and you get a better third-party app ecosystem to boot. The Lumia 820 is a lovely device, but there are better options out there, both in the Windows Phone ecosystem and in the iOS and Android ecosystems. Be sure you absolutely want Nokia before you choose this one.