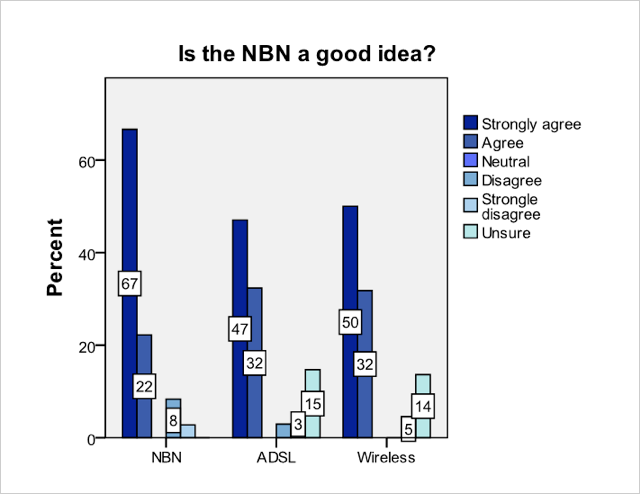 news An extensive survey of residents in the early stage National Broadband Network rollout zone in the Melbourne suburb of Brunswick has shown that 89 percent backed the NBN as a “good idea”, even if they hadn’t immediately signed up to use the project’s fibre infrastructure.

The survey was contained in a report, High-speed Broadband and Household Media Ecologies: A Report on the Household Take-up and Adoption of the National Broadband Network in a First Release Site, which was put together last year by the University of Melbourne and the Swinburne University of Technology using funding from an independent grants scheme operated by the Australian Communications Consumer Action Network. It is available online in full now. The study initially surveyed some 282 households in late 2011 and in mid-2012 followed up with a survey to 102 households from the initial set. All 2,600 households in the Brunswick early stage area were initially approached with door to door canvassing.

One aspect of the survey sought to examine views on the NBN project as a whole, with 82 percent of surveyed households agreeing or strongly agreeing that the NBN was a “good idea”. The percentages were higher amongst those who had already signed up to use the NBN’s infrastructure, but even the vast majority of those currently using ADSL and wireless broadband solutions in Brunswick believed the NBN was a good idea.

“The second largest set of reasons for support of the NBN related more to national benefits across a range of factors, including building an infrastructure for all Australians (14%), which would be beneficial for the future (11%), would improve national productivity (8%), and would help us maintain global competitiveness (6%). Other reasons noted were the importance for connecting and including rural Australia (5%) and keeping up to date with developments in technology and innovation (5%).” 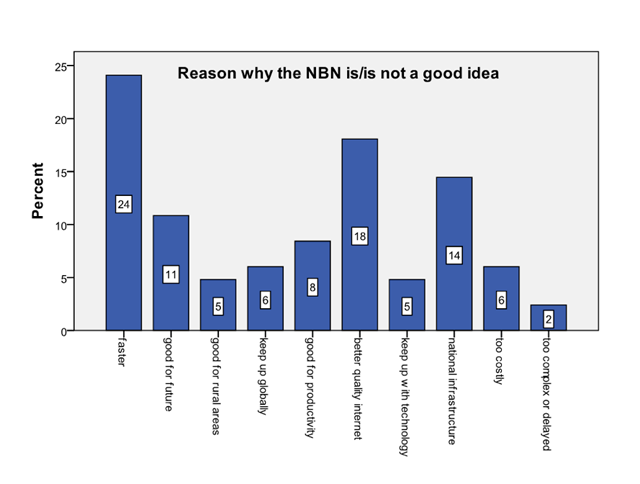 “In contrast to this raft of positive reasons for supporting the NBN, a small percentage of respondents had negative views, with 6% thinking it was either too costly or a misdirected use of government funding, while 2% thought the project itself was too complex and suffering delays (see Figure 36).”

Secondly, although there were early issues regarding NBN take-up in the area (primarily due to issues such as dealing with unfamiliar technology, the in-development nature of NBN Co’s installation process, confusion about the nature of NBN Co as a wholesale provider and the fact that landlords (not residents) needed to provide approval for installation), many of these early issues have now been resolved in the area.

NBN households in the area appeared to primarily be motivated by speed to take up the infrastructure, with those not opting for the network citing the perceived costs of doing so or satisfaction with their current telecommunications plans. However, once households did take up the NBN, they were more likely to make greater use of the Internet and more likely to engage in more sophisticated online activities. NBN-connected households were also twice as likely to be used as placed of work than other households.

“Our research suggests that the personal value proposition of the NBN is its speed and its data capacity, which is perceived to be associated with increased participation in the digital economy for both work and leisure,” the report found. “NBN households also believe the NBN is of national value and can help to play an important role in building the productivity and competitiveness of the national economy, and in providing for universal digital inclusion.”

Image credit: Taken from the report mentioned in the article.