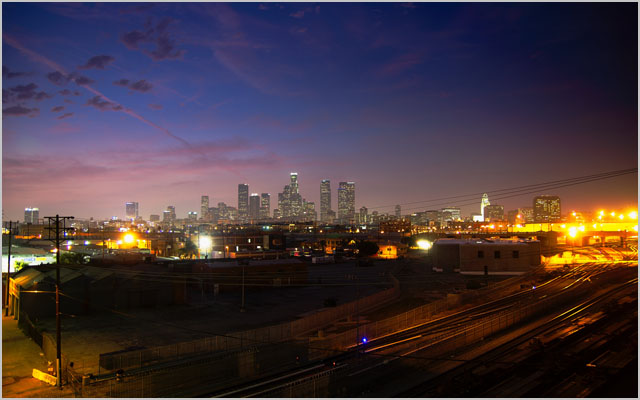 news The City of Los Angeles has reportedly revealed plans to embark on a massive Fibre to the Premises city-wide deployment of fibre broadband, in a model that may deliver gigabit broadband speeds to the city’s 3.5 million residents and all businesses and vault it into the next-generation of technology enablement.

Quoting Los Angeles IT Agency general manager Steve Reneker, US-based technology media outlet Arstechnica reported overnight (we recommend you click here for the full article) that the city plans to issue a request for proposals document that would see it select one supplier to run fibre to every resident, delivering free Internet access of between 2Mbps and 5Mbps and paid broadband at speeds of up to 1Gbps.

Los Angeles expects, according to Arstechnica, the fibre rollout to cost between $3 billion and $5 billion — but the cost would be bourne by the vendor, who would, in effect, receive a regulated right over its infrastructure and a captive pool of customers in return. The network model would reportedly be open access — meaning that other ISPs would be able to sell access on the infrastructure.

The model chosen by Los Angeles mimics almost precisely the Fibre to the Premises plan which represents Labor’s NBN policy. Under Labor’s NBN policy, some 93 percent of Australian premises were to have received fibre directly to the premise, delivering maximum download speeds of up to 1Gbps and maximum upload speeds of 400Mbps. The remainder of the population was to have been served by a combination of satellite and wireless broadband, delivering speeds of up to 25Mbps.

And Labor’s plan also involved an open access network, which retail ISPs would be able to provide services over.

Originally, the Coalition’s policy was also to have seen fibre to the premises deployed to a significantly lesser proportion of the population — 22 percent. However, much of the remainder (71 percent) was to use the rival fibre to the node technology, where fibre is extended to neighbourhood ‘nodes’ and the remainder of the distance to premises covered by Telstra’s existing copper network. The model is significantly less technically capable than the FTTP model picked under Labor’s policy. The Coalition’s policy was also continue to use the HFC cable network operated by Telstra and will also target the remaining 7 percent of premises with satellite and wireless.

However, the possibility of a different style of rollout has been raised by Turnbull in the several months since the Liberal MP became Communications Minister. In late September, Turnbull appeared to have drastically modified the Coalition’s policy stance on the NBN just weeks after the Federal Election, declaring the Coalition was not wedded to its fibre to the node model and was “thoroughly open-minded” about the technology to be used in the network. NBN Co is currently conducting a strategic review into its operations and model that will inform Turnbull’s decisions regarding the project’s future.

Los Angeles’ model is just the latest planned deployment emerging from the United States which is focusing on FTTP broadband with gigabit speeds, with the Google Fiber initiative also focusing on the same model. Google has deployed its all-fibre infrastructure to cities such as Kansas City in Kansas, as well as Kansas City in Missouri, and there are plans underway for additional expansion to other Kansas City suburbs, as well as Austin in Texas and Provo in Utah.

It is unclear as yet whether Los Angeles will be successful in attracting a supplier to build and own the planned FTTP network. Major telcos such as AT&T, Verizon and others, as well as potentially even Google, would be on the list of companies the city would likely be speaking to.

opinion/analysis
What we’re seeing here is a highly interesting move by the City of Los Angeles. It is essentially proposing, as the then-Labor Opposition did under Kevin Rudd back in mid-2007, a massive broadband network funded and operated by the private sector, but with enough regulatory certainty that whoever funds and builds the network is able to be certain that they can get a solid return on their investment.

That model is very much not the norm globally, and has even failed in countries such as Australia, where the then-Labor Government’s expert panel found that none of the bids were suitable. And that was with, let us not forget, the promise of $4.7 billion of public money on the table. Los Angeles is not even offering that — it wants the private sector to fund the whole lot itself.

Personally, I don’t think it is very likely that Los Angeles’ network rollout will go ahead, unless it can sign up a major ‘non-telco’ player such as Google for the initiative. Google has the deep pockets and network rollout experience to get something like this done, and it has certainly made great progress in other cities, although the company might baulk at having to provide wholesale access to its fibre infrastructure, which it hasn’t done with respect to its other network rollouts.

Telcos such as AT&T and Verizon are unlikely to be willing to sign up to rolling out this kind of network for Los Angeles unless they can get more direct financial support from the city or more control over how the network is operated.

On the other hand, if the rollout does go ahead, it will be an amazing success story for this kind of partnership. The residents and businesses of Los Angeles, who have historically, by many accounts, suffered relatively poor levels of broadband, will certainly be more than happy if the project does get off the ground.