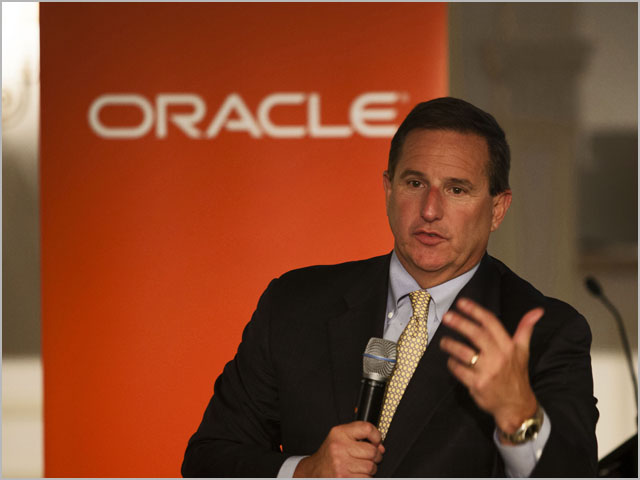 news Oracle co-president Mark Hurd (pictured above) has used a visit to Australia over the past week to officially launch the company’s second local datacentre, which the US enterprise IT giant will use to expand the variety of cloud computing and hosted services it provides locally to Australian customers.

In late 2010 Oracle launched its first tranche of local infrastructure in Australia through the deployment of CRM on-demand services hosted in Sydney through a deal with local datacentre operator Harbour MSP. Over the past several years the company has signed up a number of sizable Australian public and private sector entities to use the platform hosted in Australia.

According to a statement issued in January 2012 by Oracle, local customers who have been provisioned in the local datacentre on the Oracle CRM On Demand platform include the Victorian Department of Human Services, NSW government agency NSW Businesslink, NBN Co, AJ Lucas and Suncorp.

This morning, at a press conference in Sydney, the company’s co-president Mark Hurd, revealed last week to be in Australia to attend the Australian Open and meet with local customers, told journalists that the company would now launch a second facility, hosted by datacentre giant Equinix, and providing services beyond Oracle’s current local offering.

The new facility will give customers access to locally hosted Oracle Fusion applications, including the company’s enterprise resource planning, human capital management, talent management, sales and marketing and customer services and support offerings. In addition the company will offer a locally hosted version of the solution it describes as platform as a service, consisting of the company’s database and application serving capabilities.

All of the offerings will be managed and supported directly by Oracle staff, using the company’s pre-engineered systems such as its Exadata Database Machine, its Exalogic Elastic Cloud and so on, and even its Exadata Database In-Memory machine, which was announced only last October.

The facility opened in early January, but Oracle has already signed up several customers to use its services, including financial services company IOOF, which will be the first customer live at the new facility, customer relationship management consulting firm Wired2Cloud, Oracle partners i3000 and Vensys Consulting and IT management services firm SDS Group.

Hurd told journalists he wanted locals to view the datacentre as an investment in Australia and a commitment to the local market, as well as a move to meet the data sovereignty aims of customers, although he wouldn’t confirm how much Oracle would invest in the initiative.

Responding to a question as to whether he could commit the notoriously high-priced Oracle to maintaining Australian prices on par with prices charged in its home country of the United States, Hurd declined to make any such commitment. Oracle’s objective with pricing in Australia, he said, was to price competitively for the local market, and to “thrill customers” and “delight” them with combination of price and value.

In general, Hurd said with its local offerings Oracle was attempting to take away all the concerns which customers had regarding the delivery architectures of the vendor’s technology, and focus them on the intellectual property and value being delivered instead; offering “ultimate flexibility” in deployment models for its software, ranging from on-premise standard deployment approaches to private cloud, Oracle’s own cloud and so on.

“If you’ve got a concern about data sovereignty outside the country, we’ve just alleviated that,” Hurd said.

The competition
Hurd also made reference repeatedly during the press conference this morning to Oracle’s competition, although not by name. The company’s main rivals are believed to be companies such as Salesforce.com, SAP and Microsoft, which all provide competing solutions to Oracle, although generally not with the full breadth of Oracle’s offerings, which range across virtually every area of enterprise IT software and many hardware areas, through its purchase of Sun Microsystems.

Hurd said Oracle was “really the first participant in the market” to offer a suite of capabilities through the cloud, rather than just a single app. Salesforce.com, for example, although it does have wider capabilities, in the past has experienced most of its success through its Sales Cloud CRM application, although it does not have wider capabilities. “In most cases people have only released one app,” said Hurd (although again, he did not name any competitors by name). “What we’re releasing is a suite of applications.”

Hurd’s sentiments appear to reflect customer uptake of Oracle’s products. Just last week, for example, Oracle Australia released the names of two major local customers, the NRMA and Coles, which have adopted a wide range of Oracle products beyond just a single application. Similarly, in May 2012 the vendor released the names of other local customers which had deployed various pieces of Oracle’s infrastructure.

opinion/analysis
Wow. Oracle is often quite a hard nut to crack; I wouldn’t describe it as the most responsible of enterprise IT vendors, and certainly there are many in the IT industry out there who would laugh when asked if Oracle’s offerings “delighted” them, as is Hurd’s ambition.

However, of all the major enterprise IT software vendors, it appears that right now in Australia, it’s actually Oracle which is the most flexible, dynamic and responsive when it comes to actual customer needs on the ground. Unlike Microsoft, SAP, Salesforce.com or other smaller rivals, Oracle has committed to deploying a full suite of cloud computing capabilities, in-country, from its own managed datacentre. And it’s doing so right now.

In comparison, SAP is following, but much more slowly, Salesforce.com has made nebulous promises about an Australian datacentre but appears to have done nothing to meet that demand (resulting in the company being marginalised in the data sovereignty-sensitive public sector) and is rather too obsessed with the nebulous “social enterprise right now, and Microsoft has also refused to commit to local cloud computing services, although of course, as with Oracle’s solutions, you can actually buy locally hosted versions of Microsoft services from Australian partners pretty easily now anyway.

And Hurd’s right. When customers go Oracle, they don’t just buy one of the company’s solutions; they tend to buy the whole shebang. Financials, ERP, CRM, database, sometimes Exadata and more. As soon as you start talking to Oracle, you know you’re going to buy almost the whole pie from it, rather than just small slices as you would from other vendors. This philosophy is best displayed by this article about NBN Co’s purchasing philosophy when setting up its own IT systems. NBN Co itself opted for a full tranche of Oracle products, rather than picking best of breed options in each category. And in my experience, many Australian CIOs think the same way, no matter that Oracle can occasionally inflexible and experience. 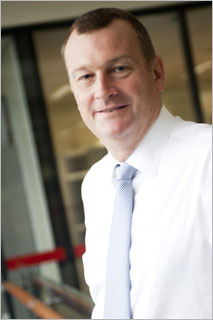 To my mind, although it was Hurd that announced the deal this morning, it has no doubt been long-time Oracle Australia MD Ian White (pictured, right) who masterminded this whole deal. White – who has led Oracle A/NZ since mid-2005 – probably has one of the best insights into the Australian enterprise IT software market to be found across Australia, given he sells into almost every single aspect of it – and he is no doubt aware that the issue of data sovereignty has long been a huge one. If Oracle didn’t make this kind of major commitment to the cloud computing paradigm in Australia, it would be risking much in the long-term in the vendor’s key public sector and financial services markets.

By convincing the higher-ups in Redwood City that such a strong local investment was worth it, White has been able to steal a clear march on Oracle’s rivals and provide certainty for Oracle’s existing local customers, as the nationwide transition to the cloud accelerates. In Australia, cloud computing (and software as a service in particular, which is really much of what Oracle is selling here) has over the past few years passed through Oracle’s Trough of Disillusionment on its famed Hype Cycle and is now clearly into the Slope of Enlightenment/Plateau of Productivity phase.

In short, Australian CIOs know what the cloud is good for, and what’s it’s not right now, and there is a strong trend towards ‘cloud-first’ solutions for new deployments. White has, no doubt, seen deals such as SAP’s huge cloud-based ERP consolidation project with the NSW department of Trade and Investment, and seen the cloud future writ large in the decade ahead. Oracle needs to keep its slice of that pie, and the new local datacentre will gradually become a major focus for it in the years ahead, I would bet.

For Oracle’s rivals in Australia, this morning’s announcement will be somewhat disturbing. Oracle isn’t usually known for being a fast-mover, but in this case it’s out in front. Can the likes of SAP, Microsoft, Salesforce.com and others (I’m even thinking of Google here, with Google Apps) convince their own far-flung headquarters to establish Australian datacentre environments quickly? Let’s hope they can. A strongly competitive local cloud computing/software as a service market would be great news for all. In the meantime, all credit to Oracle. The company appears to be doing precisely what its customers want.