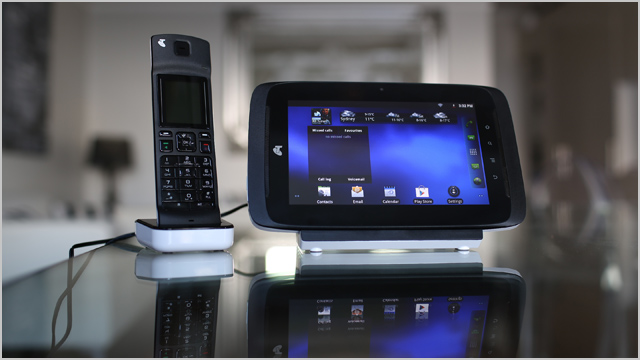 The first T-Hub first launched in April 2010 and ran a customised version of Linux. It featured an 18cm touch screen that allowed users to make and receive phone calls and also to receive and send text messages, browse the internet, play music and radio stations, view the latest news, sport and weather and organise events with an in-built calendar. Customers were also be able to use the device to search for phone numbers, with integrated access to Telstra online phone directories — the White Pages, Yellow Pages and 1234. However, a significant downside of the T-Hub is that it could only be used by Telstra customers, limiting its appeal to the broader telecommunications user base in Australia.

In a statement issued this morning, Telstra’s executive director of its Wireline Products division, Brian Harcourt, said the T-Hub 2, manufactured by Technicolor, took the best features from the original model and added “a powerful Android platform” and an all-new design.

“As the next step in our connected home strategy, T-Hub 2 caters to what modern households need in a home phone, offering a smarter way to make calls, manage contacts and access handy internet services like live weather updates and social networking sites,” Harcourt said. “T-Hub gives Telstra customers unique fixed line features including hands-free calling from a tablet and voicemails displayed as a list so owners can see who called and jump to the messages they want to hear most.”

“Physically, T-Hub 2 has had a makeover with both the phone and tablet featuring curved lines and an elegant black and white finish. The 7-inch Wi-Fi enabled tablet sits upright in a charging cradle with stereo speakers so customers can enjoy high quality music. The tablet has a built-in kick stand meaning it can be used easily throughout the home.”

“To ensure T-Hub 2 meets the needs of Australian families we enlisted the help of Telstra customers who trialled the device during its development. We also listened to feedback from owners of the original T-Hub. They told us call clarity, managing contacts, and access to applications were really important to them and we have focused on making these features high-quality and easy to use.

The T-Hub 2 is compatible with the National Broadband Network, making it “easy” for customers to transition with their home phone to high-speed broadband when their local area is fibre-enabled.

The new T-Hub 2 is part of Telstra’s connected home strategy, featuring a ‘T-Share’ application which allows users to view and share videos, photos and music between the T-Hub, Telstra’s T-Box loungeroom set-top box and TVs and PCs which use the DLNA standard.

The device’s CPU is a TI OMAP Dual-core 1GHz model, and it comes with 1GB of RAM and 2GB of flash memory storage. It supports voice calling on either the existing PSTN network or over the NBN (although Telstra did not stipulate whether it supports IP telephony), and has a 7″ WSVGA screen. It has 1.2 megapixel front and 1.9 megapixel rear cameras.

In terms of interfaces, the T-Hub 2 supports microUSB 2.0 and micro HDMI plugs, and it has an SD card slot and will also take a 3.5mm stereo connection. It can connect through the normal Bluetooth and Wi-Fi standards, as well as the DECT wireless telephony standard. Telstra is billing the tablet’s standby time as being 18 hours for both the tablet and the associated portable handset.

The T-Hub 2 arrives in-store today. It is available for $360 outright for customers with eligible services or can be purchased in conjunction with a Telstra T-Bundle and paid off over 24 months for $15 a month. T-Bundle customers also get unlimited voice calls in Australia from their home phone to up to four Telstra mobile services on their single bill, as well as unlimited local calls on most T-Bundle plans.

“The home phone remains central to how Australian families communicate and the T-Hub 2 re-imagines a much-loved communication device, making it the smarter phone for Australian homes,” Harcourt said.

opinion/analysis
To be honest, it’s pretty hard for a power user such as myself to look at Telstra’s T-Hub 2 device and see anything other than an underpowered and half-baked Android tablet that will have limited utility in a world where everyone has an iPad and an iPhone/next-generation Android smartphone. Why, for pity’s sake, would you develop an Android tablet which seems destined to sit in a cradle on your sideboard counter instead of being picked up, taken with you and used?

However, I — and almost all of the readers of Delimiter — do not represent the mainstream. There is a community of around several hundred thousand mainstream users out there who bought and liked the original T-Hub, and I suspect that many of them and others will also buy and enjoy the second T-Hub.

The T-Hub and T-Box devices are obvious attempts by Telstra to lock its users in to continuing to use its fixed telephone and broadband services, in a world where it’s very easy to switch to an alternative provider such as Optus, iiNet or TPG. As such, unlike carrier-agnostic devices such as the iPad, they are compromised devices designed as much to suit Telstra’s aims as they are to suit those of its customers.

However, for many users, especially those who have been with Telstra their whole lives and have no desire to change, this won’t necessarily be a problem. The T-Hub 2 will deliver many of these users a gentle entry point into the Android world and provide for quite a few household needs such as searching online directories — cloaked in the familiar paradigm of the home phone. Because of these reasons, although it’s not a world-beating device, I can’t help but see the development of the T-Hub as a positive thing. We certainly don’t see Telstra’s competitors innovating quite this radically — and even though it might be highly self-interested innovation, innovation in this market is always a good thing.

Of course, there is also the fact that Telstra’s last in-house Android tablet was a dog of a machine, and even the original T-Hub had quite a few bugs when it shipped. We’ll be keen to get the new T-Hub in for a review before we pass final judgement on it. We suspect there will be a few post-launch patches on the way as Telstra gets this thing out there into the wild.