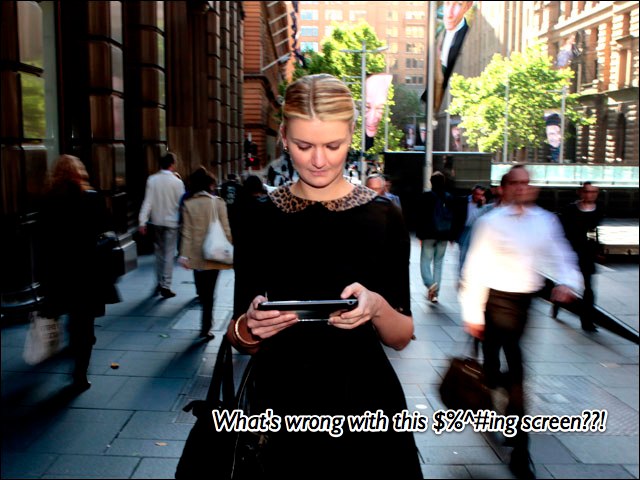 review The market for tablet computing devices is currently running white hot in Australia, with a fire being lit under the wallets of local consumers by the launch of Apple’s iPad in May this year. And the entrance of Android devices such as the Dell Streak and the Samsung Galaxy Tab is slated to stoke that blaze even higher.

Into this field comes a wild card — a new Android tablet marketed under Telstra’s own brand and priced at less than half the cost of its competitors. But is the T-Touch Tab really a challenger in the tablet market — or just an also-ran?

Design
As soon as you pick up the T-Touch Tab, you’ll know you’re not in Kansas any more — the tablet isn’t going to win any design awards. It generally resembles a small, squalid tank, or maybe a stylised brick. In an age where handheld consumer devices are growing lighter and more svelte every day, the T-Touch Tab feels like a throwback to humanity’s Iron Age.

The brown plastic casing of the device is nice enough, but there’s a cheap-looking metal rim running around its edge, and on the back of the device is a large — and heavy — metal plate that Cro-Magnon man might have thought its pièce de résistance. You could certainly fire a crossbow at the back of the Tab and not dent it — the metal appears to be thick and strong.

On paper, the T-Touch Tab should feel lighter than Apple’s iPad, because it is — 500g versus the 730g of the 3G iPad. However, in practice the Tab feels heavier when you’re not holding both together — because the iPad’s screen is much larger (9.7″ versus the T-Touch Tab’s 7″), so you expect the extra weight. You wouldn’t expect to hold an iPad in one hand easily — whereas the Tab, at a size not too different from many eBook readers, does invite that comparison.

On the back of the device is also an embedded metal stand which lets you prop the T-Touch up — for viewing movies while on a plane, for example. Or, it could allow the Tab to be converted into the kind of impromptu handheld weapon that Jet Li might find useful. Did we mention it’s heavy?

Running around the outside rim of the device you’ll find a set of fairly standard ports — a 3.5mm headphone jack, a power button, USB and power connection sockets, a microSD card slot and another slot on the bottom which we couldn’t identify.

Some fairly standard Android buttons are on each side of the tablet, where your thumbs would sit if you were holding it with both hands (as you’ll need to be). There is a small camera on the front of the device (presumably with a low megapixel rating, Telstra didn’t say) to facilitate video calling and a more powerful one on the back — but it’s still woeful, with only a 2 megapixel rating.

Features
On paper the T-Touch Tab, which was built by Chinese manufacturer Huawei, has some surprisingly respectable features for a large Android device released in 2010. Like many of today’s Android phones, it has a Qualcomm Snapdragon CPU, running at 768 MHz. 512MB of internal storage comes standard, and the T-Touch shipped to us with a 2GB micro-SD card included.

The operating system is Android 2.1 — fairly standard for an Android device in late 2010, although a number of manufacturers have started upgrading their devices to 2.2. Telstra is currently testing upgraded firmware for the tablet with the 2.2 platform.

Telstra has installed its usual range of custom software on the Tab and changed the Android interface somewhat to reflect this. Normally our first reaction to this kind of stuff is to frantically search for a “reset to factory default” button to get rid of the Telstra crapware. However, we’re prepared to admit that not all of Telstra’s software is completely rubbish — some part of it can be useful — such as the option to stream Foxtel video.

Performance
Despite its fairly strong technical credentials, the thing that you’ll notice about the T-Touch Tab once you start playing with it for any length of time is that the device does not stand up to real-life use — in even the flimsiest of senses.

For starters, its screen is a nice size — but only runs at a resolution of 800×480 pixels, the same resolution used by many mobile phones with much smaller physical screens. This gives the viewer an impression of fuzziness.

But the main problem is that the screen is based on what’s called resistive touch technology. This isn’t the same kind of touchscreen found on modern mobiles such as the HTC Desire — which use capacitive touchscreens. In short, to interact with the T-Touch Tab, you either have to press down on its screen very hard, repeatedly in the same spot — or use the bundled stylus … which we think is simply too old-school to bother with.

It’s a frustrating experience — and one we hated instantly. Telstra makes the argument that you’ll get used to the screen after a few minutes playing with it. However, in an age where the iPhone’s capacitive screen is the baseline by which all other touch interfaces are measured, the T-Touch’s screen is unforgivable.

Lest we forget, it’s not just early adopters using iPhones these days — many of that vertical has switched to an Android by now. Middle-aged Australians and even aged-care pensioners are also buying the Apple devices in droves. In this context, anything resistive on the scale that the T-Touch Tab’s screen is will appear prehistoric.

The CPU also doesn’t live up to its specification … we found the T-Touch Tab’s interface sluggish, and using applications reminded us of the bad old smartphone days, before the iPhone was introduced to the world. It’s Android, sure enough, but at times the Telstra T-Touch Tab feels like Windows Mobile 5.

The battery on the T-Touch Tab is also suspect. On paper it’s rated for up to 150 minutes — two and a half hours — of video playback, but in real life it ran out in around half a day of casual browsing. And don’t even think about trying to take this tablet on a road trip without it plugged into your car’s cigarette lighter — your kids will get bored very quickly.

We also experienced problems trying to charge the T-Touch Tab from a USB port, as opposed to using its dedicated charging device. Maybe it’s actually not supposed to be charged by USB — but either way, it’s a problem in an age where USB charging is standard. Many people will deliver a “WTF?” when they return to their desk and find the Tab hasn’t charged by USB as they expected.

Conclusion
Frankly, the T-Touch Tab is a dog of a machine.

At $299, its only saving grace is that it’s cheap as chips. Telstra acknowledges it’s not attempting to compete with other tablets such as Samsung’s Galaxy Tab (at $999) or even the cheapest iPad (starting at $629 for the Wi-Fi version, or $799 for the 16GB 3G version) with the Tab.

However, it’s blindingly obvious that the T-Touch Tab won’t even serve the low-end market that it’s aimed at. With an awful touchscreen and an awful battery, this is truly a device whose price is too good to be true. How much should you pay for a device that’s destined to be thrown against your wall several times a day?

Avoid like the plague — and advise the less technically savvy to as well. They’ll be happier with an expensive iPad or Galaxy Tab — or even, in some cases, a portable DVD player — than they will be with Telstra’s first flawed attempt at an Android Tablet. And they won’t have wasted their money.

Of course, almost all of the problems in this review can actually be laid at the door of Chinese vendor Huawei, which actually built the T-Touch Tab. Let’s hope the pair’s collaboration next time around can deliver some more usable fruit.