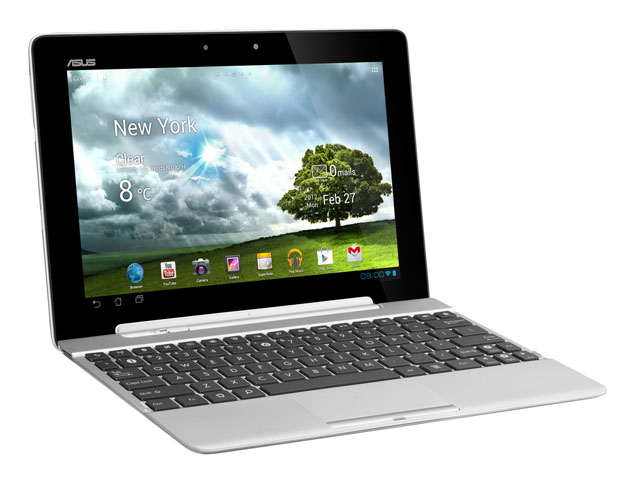 news Taiwanese consumer electronics giant ASUS has started selling its Transformer Pad TF300T Android tablet in Australia, with the device to hit retailers this week starting at $499 for the basic model, and $599 with a docking station attached.

The Transformer Pad is the latest in a line of ASUS Android tablets which feature the ability to be connected to a keyboard docking station, as pictured above. The docking station also dramatically extends the device’s battery life.

The Transformer Pad is one of the first of an expected second-generation of Android tablets which are slowly arriving on Australian shores. The device features an NVIDIA quad-core Tegra 3 CPU running at 1.2GHz, a 12-core NVIDIA GeForce graphics processing unit, 1GB of memory and 12GB or 32GB of storage space, a 10.1″ WXGA touchscreen running at 1280×800 pixels, an eight megapixel rear camera and a 1.2 megapixel front camera, an SD card slot and other advanced tablet features. It runs version 4.0 (Ice Cream Sandwich) of Google’s Android platform, and has a battery life of an estimated 10 hours, extendable up to 15 hours with its optional keyboard dock. THe device weighs some 635 grams, measures 263 by 180.8 by 9.9 mm, and comes in “”Royal Blue, Iceberg White and Torch Red” colours.

Delimiter’s review of the previous device in ASUS’s tablet line-up, the Eee Pad Transformer Prime, found that the device had great hardware, but was let down by its software. Reviewer Jenneth Orantia wrote:

“Based on the lag and stability issues that plague the Transformer Prime, we get the feeling that ASUS rushed the Ice Cream Sandwich update out just for the privilege of being first to market. What we’ve ended up with, then, is a beautifully-designed, extremely powerful tablet that fundamentally fails to deliver the performance improvements we were expecting. Yes, gaming and video playback is better, but performance for everyday usage actually seems to have gotten worse in some areas, and we can see a lot of unhappy customers kicking themselves over not having gone the more sensible route of buying an iPad 2 or waiting for the iPad 3.”

Engadget has published a broadly positive review of the Transformer Pad, writing: “Even as more mid-range, 10-inch Android tablets start hitting the market, the second-gen Transformer still feels like the best deal, with smooth, Tegra 3-powered gaming, good endurance and an understated design that calls to mind ASUS’ other Transformer, the $500 Prime … the tablet is eminently usable, and ultimately a pleasure to live with.”

opinion/analysis
I don’t expect the Transformer Pad to set Australia on fire, but right now if you’re considering an Android tablet, this is one of the better options available in Australia. Of course, you’ll need to decide not to buy an iPad first. This isn’t an unreasonable choice. While Apple’s still out in front, many people won’t buy anything which was designed by Cupertino, and the quality of Android tablets is gradually increasing.