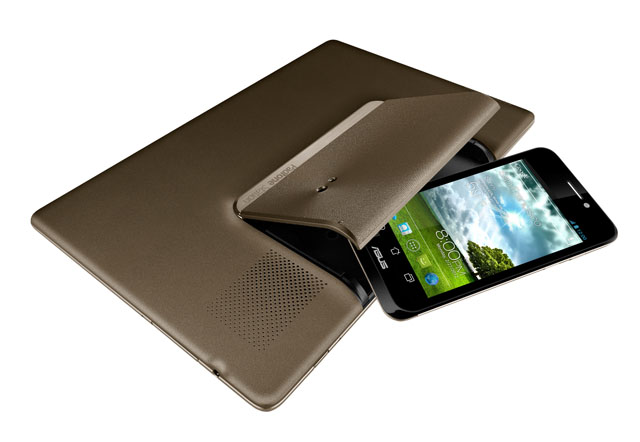 news Taiwanese electronics giant ASUS this morning announced that its combination smartphone, tablet and netbook device the PadFone, would launch in Australia through Harvey Norman from 14 August, retailing locally for $999.

The core of the PadFone is a smartphone running version 4.0 (Ice Cream Sandwich) of Google’s Android platform. The device features a 4.3″ super AMOLED touchscreen running at a resolution of 540×960 and with a pixel density of 256 ppi and a dual-core 1.5GHz processor (Qualcomm’s Snapdragon S4 8260A model).

The PadFone also comes with the ability to take a microSD card up to 32GB, and comes with 1GB of memory. It supports HSDPA speeds for 3G access at up to 21Mbps, and HSUPA speeds of 5.76Mbps for uploads., and can shoot 1080p HD video from its eight megapixel camera. It also comes with an Adreno 225 graphics chip. and 32 GB of on-board storage.

However, unlike most traditional smartphones, the PadFone can also be docked with a dedicated external tablet to dramatically extend its functionality. This so-called PadFone Station has a whole series of specifications all of its own — such as a 10.1″ WXGA TFT touchscreen running at a resolution of 1280×800. Both the PadFone itself and the docking station come with screens covered with Corning’s tough Gorilla Glass. When the PadFone is docked with the tablet docking station, it provides all the processing power for the tablet – a little like a PC provides all the processing power for an externally connected monitor.

As with ASUS’ other Transformer-branded tablets, there’s also a second keyboard docking station which you can connect the PadFone Station to gain even further functionality. And the tablet comes with a Bluetooth stylus which can also be used to make and receive phone calls when the phone is docked with the tablet module.

“With 54% of smartphone owners also wanting but not owning a tablet device, ASUS devised the PadFone to eliminate irksome issues experienced by smartphone and tablet owners,” the company said in a media release issued today. “A clever creation, the PadFone combines two of today’s quintessential gadgets into one.”

“A perfectly paired smartphone and tablet, the PadFone with its unique all-in-one functionality affords the benefits of possessing a single device, as well as value for money. Offering one-stop storage and shared 3G network access, the smartphone provides all the processing power and storage of the PadFone. Users no longer need to sync data between devices and only require one data plan, presenting affordability and eliminating the use for WiFi connectivity.”

Early reviews of the PadFone have been cautiously optimistic. The Verge’s review of the device stated that the author believed the docking model was the future, but that the PadFone’s actual execution felt “more like a tech demo than a viable product”, with some outstanding issues. Engadget appeared to agree, in its own review, stating: “What we see here is just the core of the idea, the foundation to get things started, while the rest of the product seems half-finished and doesn’t yet realize its full potential.”

opinion/analysis
I really like the idea of the PadFone, but from the looks of early reviews, ASUS hasn’t quite gotten this one right yet — although it’s heading in the right direction.

I’d also very heavily question whether the price of the device as a whole is worth it. At the moment you can buy an 11″ MacBook Air (I have one, they’re fantastic) for just $1,099 — $100 more than an ASUS PadFone. Couple that with an iPhone 4S, HTC One X/XL or Samsung Galaxy S III on a low-range monthly mobile plan for between $40 and $60 a month, and you’re getting a sledload more functionality than the PadFone, for a not incomparable price. Or, you could pick up one of these smartphones (all rated better than the PadFone itself), plus a $539 iPad 2 or equivalent Samsung Galaxy Tab tablet for around the same price.

Unless you really, really, want to dock your smartphone into your tablet and transform the whole lot into a netbook-like device, I just can’t see why you’d pass up what look like more functional options just for the ability to integrate all of your disparate devices together. It’s not as if a separate tablet takes up more space in your bag than the PadFone’s tablet, after all.

Of course, I could be wrong — I haven’t tested the PadFone yet, and the form factor could be a real winner. But I suspect it will remain a gimmick for now, until the technology matures more, becomes more of a standard, and takes off down the track in the future.