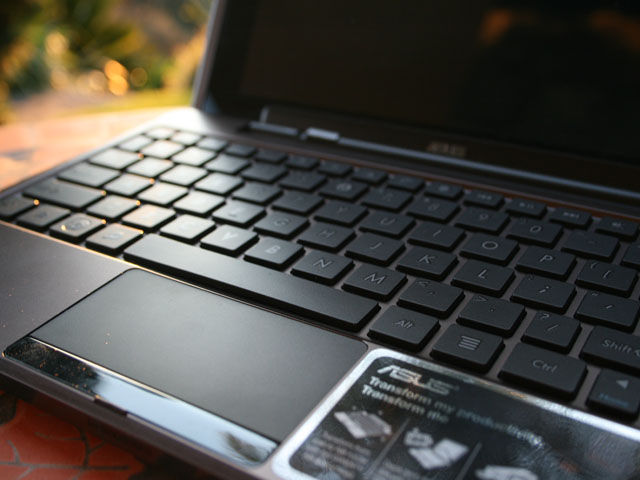 Earlier in the year, ASUS debuted what it believed to be a potential winner in the tablet craze currently taking the world by storm.

Design
As you’d expect, the tablet itself is designed almost identically to most tablets on the market today. It has a 10.1″ touch display that takes up most of the front of the device, with a thick, stylish border around the edge of the display.

The rear of the device sports a pattern that spreads across the tablet keyboard dock as well — it’s an either love it or hate it pattern that doesn’t provide the neutral design that most tablet manufacturers have opted for to date.

In terms of the depth of the tablet it comes in at 12.7mm, which is respectable in this day and age. However combined with the keyboard dock that has a depth of nearly 28mm, the tablet becomes larger than most netbooks on the market today.

By itself, the tablet also feels slightly heavier and bulkier to hold than Apple’s iPad despite the actual weight difference being minimal — the iPad 2 weighs 601g compared to the 680g of the Transformer.

Of course if you’re interested in the Transformer, it’s most likely because of the keyboard dock that Asus provide with the 32GB model of the tablet.

It’s as sturdy as you’d expect, and is solid enough to stop it from tipping over with the tablet in it — however, with the tablet in and closed like a lid, the full product is substantially thicker than say, a netbook of similar size.

The spacing between keys is good, and in all honesty the keyboard feels exactly like that of a netbook. There’s also a track-pad on the dock as well, although it’s usefulness is questionable with the Android operating system.

The keyboard has two full size USB ports, as well as a microSD card reader and microHDMI output. Unfortunately this means you’ll want the dock if you’re wanting to use external storage with the Transformer — the tablet itself is lacking in ports — but ultimately it meant Asus could keep the size of the tablet as thin as possible (Toshiba’s tablet, for instance, has received criticism for being too thick because of it’s support for full size USB ports).

Performance
Packing an NVIDIA Tegra 2 processor with 1GB RAM, the tablet is certainly not an under-performer. The tablet handled high intensity games perfectly fine, and yes, Angry Birds worked on the device.

That said — and we think this is more of an Android-specific problem rather than the Transformer itself as we’ve seen it happen on other tablets — some things, such as simply browsing the list of apps, seemed to lag behind our touch. Obviously the tablet isn’t going to have the same performance level as a normal laptop, but it more than holds its weight against other competitors in the market at the moment.

Features
We’ll focus on the unique aspects of the tablet first. The keyboard dock brings a unique experience to using Android, and shows manufacturers are coming up with new ways to distinguish their tablets in the rapidly growing tablet market.

The dock is simple to connect — it clips into the tablet, with a locking system ensuring it can’t come out until you’re ready for it to do so. Once it’s connected, the tablet begins taking charge from the keyboard, adding — according to Asus — up to another 6.5 hours of battery life, bringing the total potential life to nearly 16 hours. We came pretty close to that with our tests, although it should be said that we were disappointed that the keyboard can’t draw power from the tablet, and that there’s no easy way to see the battery level of the dock on the tablet that we could find.

In terms of functionality, it works as you’d expect, allowing you to type and access Android shortcuts with a physical keyboard. The keys are easy to press, although at times don’t seem to register unless you hit them hard. We liked the customised Android shortcut buttons that allowed for easy access to much of the popular Android functionality such as search, screen brightness and bringing up the web browser.

The touchpad mouse on the device also allows users to have more control over the Android system, but sadly in a recent update Asus made the decision to change the pointer from the more accurate arrow pointer to a circular, less precise pointer.

The microSD card reader and USB ports work as they do on other Android tablets – the system recognises something has been connected, and delegates appropriate actions (i.e. if it’s a USB storage device, it’ll prompt you for a decision on what you’d like to do with it). Other than the dock, the tablet’s functionality is pretty similar to most other Android devices. The Transformer runs the latest version of Google’s Android system, dubbed ‘Honeycomb’ version 3.2, which is specifically designed with tablets in mind.

There’s a front-facing 1.2MP camera as well as a rear-facing 5MP one that allow for all the usual video calling apps and recording functionality, as well as reasonably good quality speakers and Mini HDMI output support. However the tablet comes with a number of Asus-only applications, including ASUS Launcher, MyLibrary, MyNet and MyCloud. Essentially all of the apps offer different cloud-related functions, including file synchronisation and storage accessible from any device.

While it is possible to use a Windows application on the tablet using Asus’ My Desktop software, keep in mind that it’ll be slow (in many cases for us, almost at an unusable paces depending on your connection) and nowhere near the same as using a desktop. It does, however, offer a way of using Windows apps on Android that otherwise wouldn’t be possible or that don’t have Android counterparts, opening up the tablet to a potentially larger audience.

Final Word
The Transformer offers the best of both worlds with its tablet form factor and physical keyboard dock. While a 3G version isn’t yet available in Australia, Asus assures us it’s still on track to debut in Australia later this year, meaning you’ll be able to use the tablet on the go. It’s clear that the form factor is still new for Asus, and although it hasn’t quite got everything right this time around, it’s a welcome change from the standard tablet that is swamping the market, offering a differentiating factor that should help it stand out amongst the crowd.

If you’re looking for a portable solution, and want a tablet as well, then you can’t go past the Transformer if not having Windows isn’t an issue. Otherwise netbooks or the new Ultrabooks are probably still the way to go.