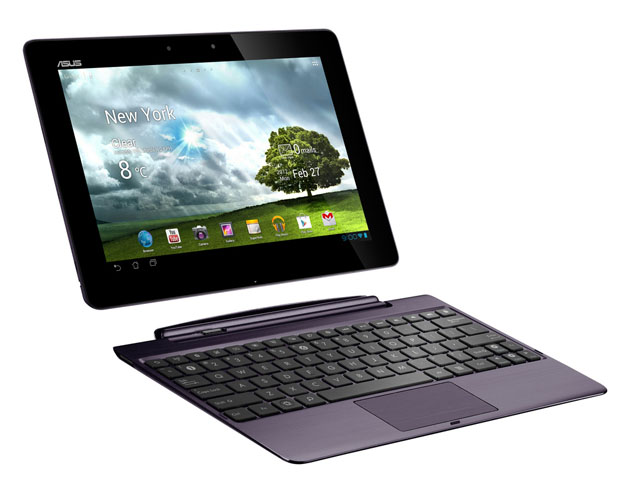 news Taiwanese consumer electronics giant ASUS has launched its most high-profile Android-based tablet yet, the Transformer Pad Infinity, with the device to sell in Australia for a local recommended retail price of $999.

The Infinity is the latest in a growing line of multi-functional tablets which ASUS has launched. In common with previous Transformer Pad models, it features a dockable keyboard unit which significantly extends the functionality of the basic tablet unit, allowing it to work more along the lines of a netbook or laptop computer rather than a more limited tablet.

However, it’s primarily the Transformer Pad Infinity’s internal specifications which had gotten some in Australia’s technology community enthusiastic about the device. It features a high resolution 1920×1200 Super IPS+ touchscreen at a size of 10.1″, covered by the second version of Corning’s Gorilla Glass.

The tablet runs a quad-core CPI at 1.6GHz (it’s NVIDIA’s Tegra 3 T33 model) and comes with 1GB of RAM and 32GB or 64GB of storage space. The operating system is the Ice Cream Sandwich version of Google’s Android platform, and the camera is an 8 megapixel model, with a 2 megapixel additional camera on the front. The Infinity comes with a microSD card slot in the tablet model as well as on its mobile dock, and it features the normal range of Wi-Fi networking options.

A 3G version appears to also have been manufactured, but ASUS’ statement announcing the tablet’s launch this week didn’t provide information on whether that model (which comes with a different, dual-core CPU) was available in Australia.

One of the strongest attractions of the Infinity is the expanded battery life which it’s possible to obtain with its mobile dock. The tablet itself is rated to last about ten hours, while the mobile dock adds another six hours to the tablet’s life. This additional rating comes at a price, however — although the tablet itself weighs 586g, the mobile dock adds a further 537g to the Infinity’s weight. The Transformer Pad Infinity is available in “amethyst grey” and “champagne gold” colours.

“The Transformer Pad Infinity is the newest and most advanced addition to the Transformer Pad family,” said ASUS in a statement. “The 64GB model has a RRP of $999, and will be available in August 2012 from authorised ASUS resellers.”

The Infinity has received broadly positive reviews after it launched internationally. Engadget noted that Apple’s iPad was a strong competitor to the Infinity. “Still, if you’re in the market for a new Android tablet, specifically, the TF700 should absolutely be on your shortlist: it’s among the best Ice Cream Sandwich tablets you’ll find at any price,” the publication wrote. Delimiter’s recent review of the Infinity’s little brother, the Transformer Pad TF300T, recently praised the device for its quality but questioned where it would fit — in between mobile phone and laptop — in the consumer electronics pantheon.

opinion/analysis
I haven’t had a chance to review it yet, but the Transformer Pad Infinity is looking solid. With its strong processing power, solid specifications and ASUS’ excellent build quality, the Infinity is shaping up to be one of the best Android tablets of 2012. Of course, there is always Apple’s iPad, but I know a lot of readers aren’t interested in the Apple iOS ecosystem, and those people, the Infinity looks sweet.

One caveat is the price. $999 is a lot to pay for a tablet in 2012, even one as well-specced out as the Infinity. We’re betting that if you are prepared to wait for a few months, this clearly unsustainable price will come down to somewhere around the $700 mark. That would make the Infinity a lot more palatable. Previous attempts to launch tablets in Australia at that price have always failed, and we’re betting this one will as well.