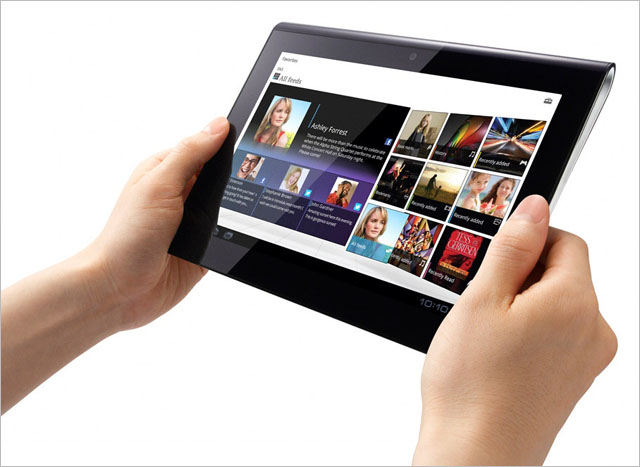 review The first wave of Android tablets made it clear that raw specs weren’t going to win the war against the iPad. HDMI and USB ports, microSD expansion, dual-core Nvidia processors … who cared when the tablets themselves were ugly as sin and using one was akin to bashing one’s head against a wall? Now that the second wave of tablets are starting to hit, most of the top shelf Android vendors have shifted their emphasis to improving the user experience, including Sony with its new (yet rather unimaginatively-named) Tablet S. Is it enough to make it a worthwhile purchase against the almighty iPad? Read on to find out.

Design
If you’ve seen one Android tablet, you’ve seen them all. Unless it’s the Sony Tablet S, that is. Sony’s first post-iPad tablet has the distinction of being the most unique-looking one we’ve seen yet, with a wedge-shaped that works well in both orientations. If you’re holding the Tablet S in portrait, the thicker end hugs the curve made by your thumb and four fingers, rather like holding a magazine when you’ve folded the cover back, while in landscape, it props the tablet up at a slight angle, making it easier to type on the on-screen keyboard without straining your wrist, and there are grooves on either side for you to rest your thumbs in.

The Tablet S also has an unusual screen size of 9.4”, although its display resolution is still the standard 1280 x 800 that other Honeycomb tablets have. At 598g, it’s slightly lighter than the Wi-Fi iPad 2, and about 100g lighter than other 10” Android tablets. A hundred grams may not seem like a big deal, but it makes a big difference when you’re holding the Tablet S for extended periods. Coupled with its unique form factor, this makes the Tablet S the most ergonomic tablet we’ve reviewed so far. It’s also the only Honeycomb tablet that doesn’t feel weird to use in portrait orientation, despite having the same 16:9 aspect ratio of its Android stablemates.

Features
The main thing that sets the Tablet S apart from the hordes of other Android tablets is the way it brings together content from various Sony holdings. There’s the Music Unlimited and Video Unlimited services for streaming music and buying/renting movies and TV shows respectively, PlayStation certification that lets you use the Tablet S for playing a handful of PS One and PSP games, and a Media Remote app for remotely controlling various Sony A/V devices over Wi-Fi. The Tablet S is also the first and only tablet we know of with an infrared blaster which works with the bundled universal remote control app.

It’s an impressive collection of functions that looks great on paper, but scratch past the surface and things aren’t quite as rosy as they first appear. For starters, the Music Unlimited and Media Remote apps aren’t unique to the Tablet S, and can be downloaded to other Android devices, as well as the iPhone for the Media Remote app. The Video Unlimited service and PlayStation gaming is unique to certain Sony/Sony Ericsson devices, but the lack of HDMI output means you’re stuck watching any bought or rented videos on the Tablet S (unless you have a display device that supports DLNA), and the PlayStation One games available in the PS Store are limited to a dozen only.

Further, while the universal remote control app comes with hundreds of A/V devices in its library, it’s very US-centric, which means you won’t find FOXTEL or the Telstra T-BOX in there, nor brands like Kogan or Soniq – you’ll have to use the ‘learning’ feature of the app to add those remote controls in manually. The one bright spot was the Tablet S’ native support for the PlayStation 3 controller over Bluetooth – while the on-screen controls for the PlayStation One games work well enough, pairing it with a PS3 controller made playing the preloaded Crash Bandicoot and Pinball Heroes games far more enjoyable.

As far as hardware specs go, the Tablet S doesn’t deviate much from the mold. It sports a 1GHz Nvidia Tegra 2 dual-core processor, 1GB of RAM, 802.11n Wi-Fi (no 3G option – yet), 16GB or 32GB of storage, a five-megapixel camera and a full-sized SD card slot. It charges from a proprietary port at the bottom that reminds us of the old multi-pronged Sony Ericsson chargers (only wider), and there’s a micro-USB port that supports USB OTG for connecting digital cameras, flash drives, keyboards and mice – although it won’t charge the tablet, nor does it come with the requisite adapter cable for converting it into a full-sized USB port.

As with most other Android tablets, it runs Android 3.2 Honeycomb, only Sony has skinned it with a custom launcher and a few custom apps and widgets that make it a little more user-friendly than the default interface. The only down-side is that the Sony customisations seem to take up a lot of space; on our 16GB review unit, only 8.9GB was available for user storage.

Performance
Customisations notwithstanding, we found the Tablet S to be a snappy performer. For an Android tablet, that is. It’s still Honeycomb underneath – an OS that has always struck us as being the dim-witted cousin of mobile platforms. One area where it really proved itself was in the Rightware Browsermark benchmark. We’re used to seeing scores of around 55,000 for Android tablets, however the Sony Tablet S achieved a significantly higher result of 88,802. This score is better than any other Android device we’ve tried, save for the Ice Cream Sandwich-equipped Samsung Galaxy Nexus, and it beats the Apple iPhone 4S by 1378 points. That said, it’s still a little slower than the Apple iPad 2, which achieved a score of 99578.

For a Sony device, we were disappointed by the Tablet S’ screen and speakers. Considering the company makes the screens for so many other mobile devices on the market, the one gracing the Tablet S was a let-down: viewing angles were rather limited, and we found the highly-reflective coating to be distracting when using the tablet indoors. Colours are rich and vibrant when you’ve got the screen brightness dialled up to 100%, but at 50% (which is where we kept it to maximise battery life), the contrast is seriously lacking. The volume of the stereo speakers was decent, but at full power it produced considerable distortion and was noticeably lacking in both bass and depth.

Sony pulls the usual trick of sealing the battery in to minimise the tablet’s thickness – even if the Tablet S isn’t all that skinny to start with, given its wedge-shaped design. Run-time was slightly above average for a tablet; it was able to play movies continuously (with Wi-Fi on and screen set to 50% brightness) for 8.5 hours. It’s not as good as the iPad 2, which can manage the same feat for just over 10 hours, but still a respectable run-time that should see it easily lasting a full day’s worth of heavy usage.

Conclusion
You know what the Sony Tablet S kind of reminded us of? The Amazon Kindle Fire. Sony is using the same MO of bundling its various content services in to make the tablet more appealing than the standard-issue Android, and it comes close to pulling it off. Close, but no cigar. The crucial difference between the Kindle Fire and the Tablet S is price.

While Amazon made the Kindle Fire a loss leader in order to generate sales for its various digital content services, the Tablet S has the exact same price as the equivalent Wi-Fi iPad 2 – despite its content services being nowhere near as developed and extensive as Amazon’s (nor Apple’s, for that matter). The message Sony is sending is that it thinks its tablet is at least as good as Apple’s offering – a strategy that other tablet vendors (such as Motorola and BlackBerry) have tried and failed at miserably in the past. Sony seems to have come to its senses in the United States by slashing US$100 off the pricetag of both models, but local units have yet to see the same price reduction. This means the 16GB model is still selling for $579, while the 32GB version is selling for $689. If the last year is anything to go by, however, the price cuts should make their way down under fairly soon.

There are things we like about the Tablet S. It’s got a nice, portable form factor, the universal remote control app works really well (notwithstanding the lack of local device codes), and if Sony can beef up its lacklustre catalog of games in the PS Store, gaming on the Tablet S with a PS3 controller is lots of fun. It’s unique enough so as not to be labelled an iPad-wannabe, but an iPad killer it is not.