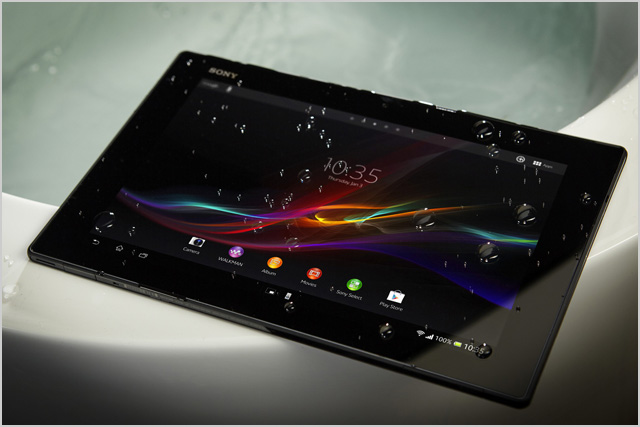 blog Sony’s last clutch of Android tablets, as with the offerings from virtually every other manufacturer, failed to make much of a dent on the Apple-dominated tablet market. However, Google’s recently had a series of hits with its Nexus line-up, and Samsung has also recently stepped up to the plate with its ‘Note’ series of tablets. Can Sony be the third party to succeed in breaking through in the hyper-competitive Android tablet market? We’ll find out shortly, as the company late last week confirmed plans to deploy its Xperia Tablet Z model locally, with pre-orders starting from this morning and the unit landing at retailers from 6 June. The Xperia tablet Z’s specs:

The model will start from a recommended retail price of $539 for the 16GB Wi-Fi model, $649 for the 32GB Wi-Fi model, and $679 for the 16GB/4G model. To our mind that’s a little pricey for an Android tablet, but Sony does see itself as competing with Apple, after all, and the Xperia Z as a premium product even if you can get most of its featureset in Android tablets that are significantly cheaper. Customers can also buy a limited edition model of the tablet which comes with the Xperia Tablet Z itself, as well as the Xperia Z smartphone and MDR1 one-touch-enabled headphones. Sony says only 50 units of the limited edition have been produced and each will be “personalised” (we’re not sure how) to its lucky owner. The limited edition units can be ordered online and start from $1,499.

“Designed with the modern day consumer in mind, the Xperia Tablet Z has received an incredibly positive response since it was first announced at MWC,” says Jun Yoon, Marketing Manager, Network Entertainment, Sony Australia. “Amazingly thin and light, the Xperia Tablet Z is extremely portable. Combined with being water and dust-resistant, the Xperia Tablet Z is able to be used by anyone with any lifestyle.” We’ve asked Sony for a review model and will put the Xperia Tablet Z through its paces when it arrives in the office. We’ve currently got the HTC One and Samsung Galaxy S4 smartphones, as well as the Galaxy Note 8 tablet, in the office for review as well, so we’ll actually have a plethora of reviews coming shortly.