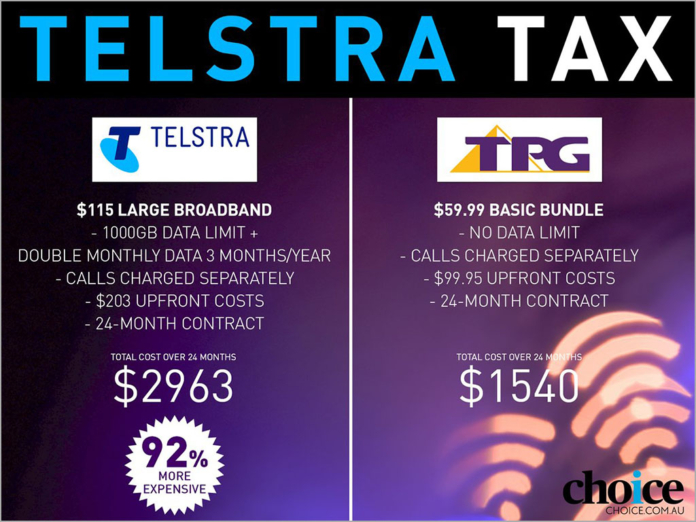 news Choice, the not-for-profit consumer advocacy group, has said that consumers are paying “up to a 92% price premium” to access Telstra’s network, which has experienced a number of major outages in the last six months.

Choice said it analysed the figures on 53 Telstra contracts that could be compared to offerings by other companies to reveal the “premium”.

“There’s only so much free data Telstra can offer before they have to admit their network is failing on a fairly regular basis and its promised premium network is a thing of the past,” says Choice’s Head of Media, Tom Godfrey.

With outages affecting pre-and post-paid mobile voice and data services, as well as broadband internet connections, “it has become clear the ‘Telstra tax’ being charged to access its network is not deserved”, Godfrey added.

“By its own admission, Telstra claims its real point of difference isn’t data limits or cost, but network quality. However, six months of network outages would suggest Telstra is a long way from offering a quality network,” he said.

Choice analysed 280 telco products to see how much extra Telstra’s customers are being charged when compared to “equivalent or better offerings” by other firms.

Of the 280 products examined, 53 “like-for-like” comparisons could be made with Telstra products. Premiums on the “majority” of these ranged from 6% to 92%, said the consumer group.

Choice provided some examples of what it called the “Telstra tax” premiums.

“Although Telstra now claims to be investing millions to fix its failing network, this is too little too late for consumers trapped in fixed-term contracts that are not getting the premium service they signed up for,” Godfrey says.

“So if you are trapped in a fixed term Telstra contract and are tired of the free data for a failing service, log your outages, record your loss and take the fight up to Telstra to get out of your contract without penalty,” he concluded.