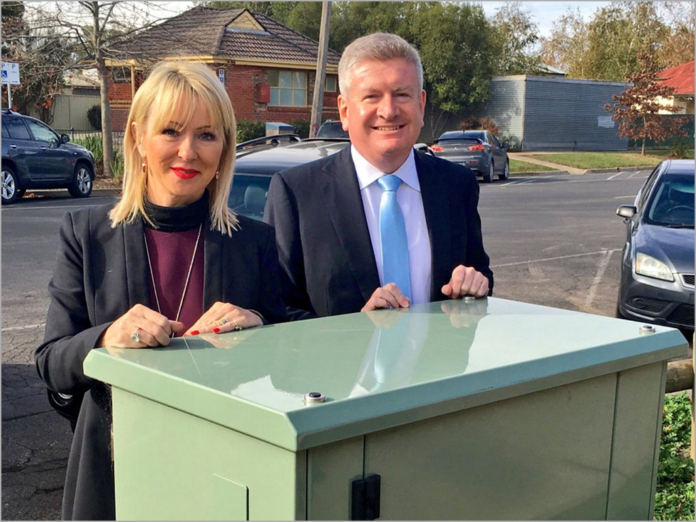 news Communications Minister Mitch Fifield has announced the launch of Fibre to the Node services this week in regional Victoria, describing the move as “great news” for local residents.

Last week the Liberal Senator visited Ballarat and the neighbouring town of Ballan in regional Victoria to announce the launch of FTTN services in the area, as well as to promote the Federal Government’s mobile blackspots policy, which is also seeing infrastructure rolled out in the area.

Fifield told local media that the launch was “great news” for Ballan particularly, which would have FTTN switched on on the 20th of May. The Minister was accompanied by Liberal candidate for Ballarat, Sarah Wade, who is going up against incumbent Labor MP Catherine King, who holds Ballarat on a 11.7 percent margin.

Fifield and Wade went on a “tour” of local telecommunications infrastructure in the area.

“Superfast broadband is right around the corner for more than 1,300 homes and businesses in this growing regional hub,” Fifield said in a statement.

Wade added: “It’s an exciting time for residents in Ballan as they will be among the first Victorians to use NBN’s node-based fibre broadband from next Friday, 20 May.”

“It has been very pleasing to see NBN construction completed so quickly here in Ballan and I know many residents are eager to connect to the improved service as soon as possible.”
Under the Coalition’s faster rollout plan, the construction phase has taken only seven months from start to finish in Ballan.”

“Importantly, Ballan residents have been spared the civil works damage and inconvenience that was a hallmark of the early stage NBN rollout under Labor,” Ms Wade said.

Fifield said on Radio 3BA in Ballarat that the FTTN switch on was “great news” for local residents.

The host, Gabrielle Hodgson, said FTTN had been “compared to building a duplicated freeway from Ballarat then finding at Caroline Springs it becomes a dirt road to the CBD”

“Is that fair?” she asked Fifield.

In response, the Minister said the previous Labor Government had taken a “theological” approach to the NBN, with former Communications Minister Stephen Conroy having decided that “the NBN had to be full fibre at any cost”.

“When Malcolm Turnbull became the Minister for Communications, he thought, let’s have a look at this. Surely the bottom line is how you can rollout the NBN the fastest and at the least cost. Because we want all Australians to have the NBN as soon as possible,” said Fifield.

“So, we’re taking what’s called a multi-technology mix, which means we’re technology agnostic. Whatever is the technology that will work, that will get a service to people quicker, and at lowest cost, then that’s what we’ll do.”

“Do whatever works. So there’s fibre to the premises, there’s fibre to the node, there’s fixed wireless, and in capital cities well be using pay TV cables, known as HFC. And in remote areas we’ll be using satellite. So using a combination of technologies. And the great news is, through this approach people will get the NBN nation-wide six to eight years sooner than would have been the case under our predecessors.”

“Six to eight years sooner, and at $30 billion less cost.”

Fifield said that under the Turnbull Coalition Government, the NBN was on-track to meet its Victorian rollout forecasts and the network is due to be completed nationally in 2020.