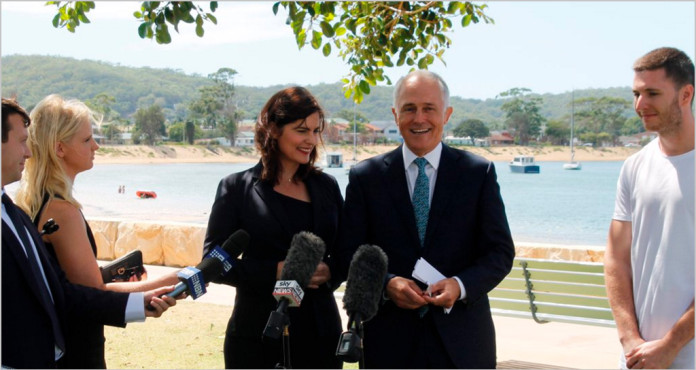 news Prime Minister Malcolm Turnbull has dismissed widespread complaints from early adopters of the Government’s preferred Fibre to the Node rollout model that the technology is slower than ADSL, attributing many of the issues to end users’ home setups, including their computers and Wi-Fi routers.

Over the past month, a large number of early adopters of the NBN company’s FTTN network have sent complaints to politicians and the media about congestion issues with their FTTN service during peak periods. A number have stated that the FTTN platform — which is supposed to allow download speeds of up to 100Mbps — is providing worse service than their previous ADSL connection.

The Opposition has received at least 60 complaints in this vein.

Some of the complaints have been resolved, but at a NBN launch event in Woy Woy yesterday, journalists put some of the ongoing issues directly to Prime Minister Malcolm Turnbull. Turnbull was in the region to promote the adoption of fast broadband. He was accompanied by local MP, the Member for Robertson, Lucy Wicks.

At the event, Turnbull presented the story of a local resident, Mitch Warr, who described the FTTN experience as “absolutely fantastic” and “cruisy as”.

“The whole start from setting it up to now being connected, has just been incredible,” Warr told the media. “The whole thing’s been fantastic.”

“I’m able to now multitask with my services. Before I was sort of limited. I mean, it was useful but I wasn’t able to sort of do multi-tasking, multiple things at the same time. Now I can be at home downloading things at the same, watching movies, listening to Spotify, watching Netflix, all that sort of stuff and it all just works perfect simultaneously, it all just works well and I haven’t had any drop-outs, I haven’t had any problems and it’s just, so far it’s worked like a dream and couldn’t be happier.”

However, the media also raised the speed issues, asking Turnbull to respond to the issue.

Where NBN FTTN customers were dissatisfied, Turnbull said the speeds they received were “affected by a lot of factors”, with “many of them” often being in customers’ own premises — “your wireless router of your own computers”.

Turnbull pointed out that it wasn’t just the connection between a customer’s premise and the Internet which affected their speeds, but also these internal factors.

Some of the FTTN problems in the early stage areas have already been addressed.

For example, the case reported by Delimiter of Newcastle resident Robbie Gratton — whose speeds had tanked during peak hours — has been resolved, with the issue in this situation appearing to be a lack of capacity provisioned by Gratton’s telco, Optus.

NBN chief executive Bill Morrow has previously stated in response to the issues that they were not related to Fibre to the Node as a technology. Instead, Morrow said, there were a number of other issues that could come into play, especially the amount of capacity which each retail ISP (such as Telstra or Optus) had purchased to aggregate customer connections back to their backbone networks.

“They know that with the NBN, a project that was left in a shocking mess by the Labor Party, there’s no doubt about that, I think everyone accepts that and many people said, “It’s such a mess, you can’t fix it.” Well we have. We’re rolling at it out at an accelerating pace and customers are getting a good experience,” Turnbull said.

opinion/analysis
On paper, Turnbull is correct — there are quite a few factors which come into play in any broadband connection, ranging from the setup of your own home network, computers and router, to the physical connection from your house to the wider network operated by your ISP as well as the amount of backhaul capacity provisioned. International links between Australia and other countries can also come into play … it matters where you are downloading data from.

However, the Prime Minister is also avoiding a bigger issue here. The truth is that retail ISPs and the NBN company are experiencing teething problems right now with respect to how they deploy, set up and supply FTTN connections. There are some systemic problems here. I suspect most of them will be worked out over the next few months, but they are there regardless.

And it’s a bit rich to push blame for these issues onto consumers. After all, if your ADSL connection was functioning correctly previously, it is the responsibility of the NBN company and retail ISPs to ensure the replacement process for FTTN goes smoothly.

To put this in technical terms … the FTTN woes we have usually been seeing are typically a WAN issue, rather than a LAN issue.