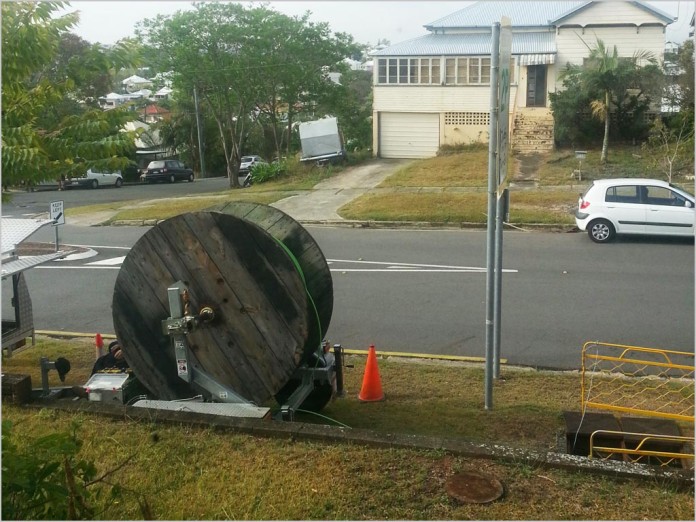 news The NBN company is secretly overbuilding portions of the Fibre to the Premises network which the nation’s biggest telco Telstra built in the several years up to 2013, in a move that calls into question whether the Telstra FTTP infrastructure will ever become part of the National Broadband Network.

However, today Delimiter can reveal that the NBN company is instead secretly overbuilding portions of Telstra’s Fibre to the Premises network in South Brisbane with its own infrastructure.

Delimiter has invited the NBN company to comment on the situation, but has not yet received a response from the company.

It is possible that the NBN company is deploying HFC cable extensions in the region, as it is believed that this area is also covered by Telstra and/or Optus HFC able. However, the information Delimiter has received signals that this is unlikely.

The extraordinary news comes as the NBN company has been explicitly overbuilding other metropolitan areas throughout Australia already extremely well-served with high-speed broadband.

The Canberra FTTN network has been in place for more than a decade and is already open access so that other telcos can use it. However, the NBN company is planning to comprehensively overbuild the network with additional FTTN open access infrastructure.

NBN chief executive Bill Morrow said in a Senate Estimates hearing on Tuesday night that TPG was not interested in selling the NBN company the TransACT FTTN network.

However, it is not clear why the NBN company would choose to prioritise areas such as South Brisbane and Canberra with new networks when other areas of Australia do not have high-speed broadband at all. The TransACT FTTN network in Canberra already supports the VDSL2 broadband standard, which offers speeds up to 80Mbps down and 20Mbps up. And Telstra’s FTTP network already offers up to 100Mbps speeds. Both are open access to other telcos.

The massive overbuilding effort is mirrored in a number of metropolitan areas, where private sector telcos such as OPENetworks have complained that the NBN company is deploying its own fibre solutions in direct competition with their existing, fibre-based networks, which are already open to wholesale access for retail telcos.

opinion/analysis
I don’t yet have enough information about what is happening in South Brisbane to conclusively form an opinion about the situation. And I will await further clarity from the NBN company, Telstra or residents and businesses in South Brisbane before I weigh in too heavily.

However, I will note that there are several things which are intensely strange about this situation.

Firstly, why is the NBN company duplicating an existing Fibre to the Premises network in South Brisbane, even if it’s only duplicating part of it? Why isn’t it focusing on areas where people don’t have fast broadband yet at all?

And secondly, why is the company hiding that information from its public rollout maps? Those maps contain no information about a rollout in South Brisbane … yet you can see the photographic evidence above that the work is definitely going on.

I would welcome clarification from the NBN company, Telstra or anyone else as to what the hell is going on here.