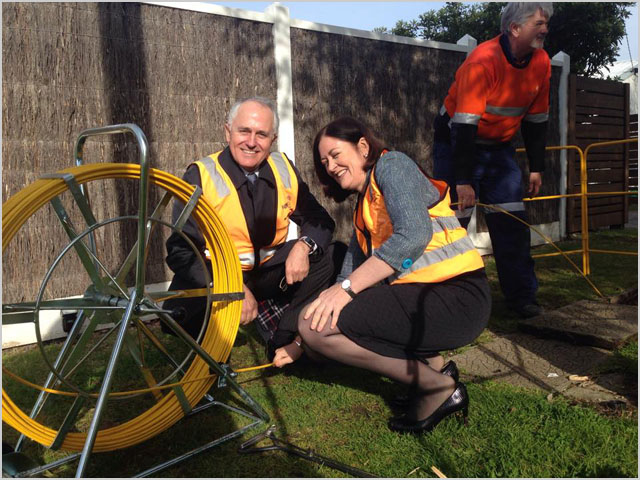 news Communications Minister Malcolm Turnbull this morning travelled to Geelong to spruik the benefits of its looming Fibre to the Node deployment, braving the ire of local residents and Labor politicians, who are increasingly demanding local Liberal MP Sarah Henderson support the technically superior Fibre to the Premises version of the NBN instead.

Geelong is currently served relatively well with broadband due to the presence of an iiNet HFC cable network covering much of the city. The infrastructure was upgraded in late 2014 to deliver speeds of up to 100Mbps. However, significant gaps in coverage still exist in the city, especially in the central business district and around the outskirts.

The previous Labor Government had planned to deploy Fibre to the Premises (also known as Fibre to the Home) infrastructure around much of Geelong, bringing the city up to date with modern broadband requirements. However, the Coalition’s Multi-Technology Mix plan is instead featuring deployments of Fibre to the Node infrastructure in some areas. It it also a possibility that nbn will acquire iiNet’s HFC cable network in the city and extend it, as it is doing with the networks of Telstra and Optus in state capital cities around Australia.

This morning, Minister Turnbull noted on Twitter that he had travelled to the region of Torquay outside Geelong, with local Liberal Member Sarah Henderson — who holds the seat of Corangamite. Torquay is one area of Geelong where Fibre to the Node infrastructure will be used.

However, the Minister’s move attracted immediate controversy on social media, with a substantial number of respondents commenting that the Member for Wentworth had failed to mentioned that he was visiting a FTTN installation in Torquay.

“No mention of FTTN?” wrote one commenter on Twitter. “The public are waking up to your rubbish. I feel sorry for the Torquay residents.” Another added: “Your FTTN won’t fix my buffering. FTTH is the logical NBN network.” And a third added: “Always thought [former Communications Minister Stephen Conroy’s] NBN was a good idea. Keep up the good work, Malcolm, and think outside the node.”

The criticism aimed at Minister Turnbull appears to be based on several factors. Firstly, one of the photos posted on Twitter following the visit featured what appears to be an ageing Telstra pit, representing the interconnection point between nbn’s fibre and the Telstra copper network needed to deliver the FTTN version of the NBN.

With @SHendersonMP inspecting the NBN rollout in build preparation in Torquay this morning. pic.twitter.com/t2SdsCkBd9

An ongoing debate has existed in Australia for many years over whether Telstra’s copper network — often embedded in pits as seen in today’s photo — is fit for purpose in terms of the planned upgrade to Fibre to the Node, with a number of technical commentators alleging the infrastructure has problems with corrosion and water and will not serve Australia’s future telecommunications needs well. Other commentators, including Telstra itself, believe the copper network will be able to meet the needs of the FTTN rollout. FTTN is also being successfully deployed in countries such as the UK, although the copper network there is substantially different from Australia’s network.

In general, the consensus of Australia’s technical community is that only a full FTTP rollout will be able to meet Australia’s telecommunications needs over the very long-term. Some expect the Coalition’s FTTN and HFC network plans with its Multi-Technology Mix NBN rollout schema to be upgraded to full fibre over the very long term.

It appears that the Coalition — including Henderson personally — has faced significant public and political pressure in Geelong over a protracted period to abandon the FTTN plans and maintain Labor’s previous FTTP rollout schema.

Geelong Labor Councillor Rod Macdonald has openly called for the Coalition Government to “ditch the copper” and has been open with his opinion that “a smart, successful Australia must have NBN fibre from east to west”, as his Twitter profile states.

In September, the Geelong Advertiser quoted Macdonald as stating that it was “essential” that the city have a full fibre network. Macdonald was part of a delegation that met with senior NBN Co executives at the time, noting that the city needed support to build new industry following the collapse of the manufacturing industry.

In March Henderson gave a landmark speech in Parliament, among other comments calling for the Coalition’s version of the NBN to be fast-tracked in Geelong, attacking the previous Labor Government’s record of delivering the NBN, and backing the Coalition’s approach.

However, the sitting Liberal MP is also increasingly coming under fire on the issue from Libby Coker, the Labor candidate for Henderson’s seat of Corangamite. Coker issued a media release earlier this month, claiming that Henderson was misleading local residents about the extent of the NBN rollout in the region.

“Fibre to the home is not a “niche” option as Sarah Henderson says, rather it is a core part of the NBN Co’s Corporate Plan 2014-2017, and it is what people want,” Coker said.

The Labor politicians’ efforts also appear to be backed by some degree of local community support for the FTTP model. A Facebook page purporting to be published by a group dubbed ‘Support FIbre to the Premises NBN — Geelong campaigners’ — has attracted more than 1,000 likes, and is actively updated, although it is not clear who is behind the page.

Henderson’s seat could be at risk in the upcoming Federal Election. In 2013, the MP won Corangamite with a majority of 53.9 percent on a two party preferred basis from sitting Labor MP Darren Cheeseman with a 4.2 percent swing. Additionally, the seat has historically generally been in Liberal hands. However, a substantial swing back to Labor or the Greens, which polled at 11.9 percent in 2013, could see Henderson fighting to retain her position in Parliament.

The mainstream media this morning was obsessed with Minister Turnbull’s train ride out to Geelong, and rightly so — the move was obviously aimed at making a political statement about the controversial helicopter flight which Bronwyn Bishop took out to Geelong to attend a Liberal Party fundraiser.

However, there are much deeper issues going on here. It appears that the Coalition’s move to ditch Labor’s FTTP NBN model and take Fibre to the Node into Geelong has angered quite a few local residents. Multiple local Labor politicians have picked up on this mood and are now sticking it to the local sitting Liberal MP Sarah Henderson, who could lose her seat on the basis of this and other issues in the next Federal Election. This is obviously one of the reasons why the Minister went to Geelong this morning.

It is also very clear that Henderson is feeling the pressure on this issue. It appears that the MP specifically used part of a House of Representatives adjournment speech (late at night, after Parliament has finished its formal business) in March to address the issue directly. MPs usually use this type of speech to address key issues in their electorates. Henderson would not have mentioned it if she did not want to show she was delivering for her constituents on this issue.

It also appears the MP has also used other opportunities to raise the issue in Parliament.

Now, I don’t want to exaggerate the situation — the NBN is not typically viewed as a mainstream political issue, and of course people will decide who they are going to vote for on the basis of many factors during the next election. The NBN will be only one of those factors. And Henderson herself also appears to be quite a decent MP worthy of respect. She is aware of this issue and working to address it.

However, I do want to note, that if this issue is dividing a community like Geelong — if there is this degree of localised discussion, which I wasn’t aware of until I started investigating it — then you can bet this same discussion is also taking place in other communities all around Australia. I’m sure Minister Turnbull and his staff are tracking a good deal of it quite closely, especially in marginal seats. I’d give a pretty penny to know just how worried they are about it.