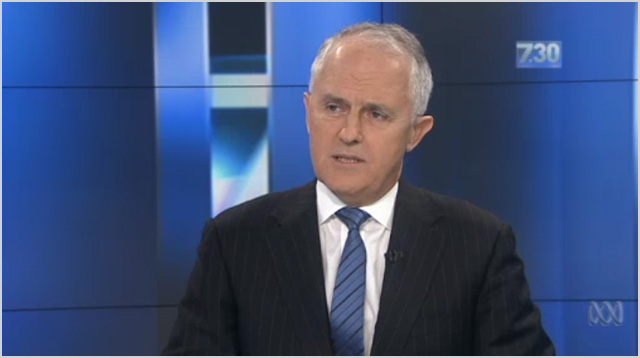 news Communications Minister Malcolm Turnbull has cancelled four scheduled appearances on various ABC television and radio shows over the past month, it emerged yesterday, as last night yet another ABC flagship cut short a discussion of Australia’s largest ever infrastructure project, the NBN, with the portfolio minister responsible for it.

Over the past month, Delimiter has published a number of articles providing evidence that the ABC is avoiding coverage of the National Broadband Network issue; and especially the Coalition’s highly controversial and unpopular modification of the project.

For example, Malcolm Turnbull has appeared on the ABC’s flagship discussion show Q&A 12 times since he was appointed Shadow Communications Minister in late 2010, but has faced extended questions on the NBN (his main policy area) just once. On all other occasions, the host has actively shut down the topic after only brief discussion or avoided it completely. Other ABC flagships such as 7:30 have covered the NBN topic only sporadically and not in depth (for example, up until yesterday 7:30 had not covered the NBN at all in 2014).

Where the NBN has been covered in detail by the ABC, it appears mainly to have been the efforts of individual passionate journalists which has spurred such coverage. However, those reporters have been sequentially deterred from pursuing that coverage. Lateline co-host Emma Alberici had her pro-NBN article delayed until after the Federal Election, when its impact would be severely diminished. ABC Technology + Games editor Nick Ross has largely ceased writing on the topic after his NBN coverage was featured on Media Watch. And another reporter who had been covering the NBN, Jake Sturmer was reassigned.

Yesterday it was revealed that it was not only the ABC itself, but also Turnbull that had contributed to the broadcaster’s dearth of high-level coverage on the issue.

The Sydney Morning Herald reported yesterday that the Communications Minister had pulled out of four previously scheduled appearances on the ABC’s flagship shows since the Federal Budget in early May, including two appearances on 7:30, one on the ABC’s AM program, and one on Insiders. The newspaper appended part of the blame to a restrictive media policy set by the office of Prime Minister Tony Abbott.

Turnbull did finally appear on 7:30 last night for a prolonged interview (we recommend you click here for the full broadcast and transcript). The interview had been scheduled earlier this week to be mainly on the topic of the National Broadband Network. However, as with previous appearances on shows such as Q&A, Turnbull’s discussion of the NBN was cut short by the show’s host.

“As we agreed earlier in the week, I’m coming on to talk to you about the very considerable progress of the NBN under the new Government, and that’s what I’d like to talk about,” Turnbull told host Sarah Ferguson. “We have made great progress of pulling this failed Labor project into line.”

However, despite the interview having been arranged largely for the NBN topic, Ferguson quickly segued off the topic, shifting the topic immediately to discussion of Turnbull’s fractious relationships with conservative commentators Andrew Bolt and Alan Jones, which has flared up as a topic this week following a dinner Turnbull held with Palmer United Party leader Clive Palmer and several others.

In addition, Ferguson also failed to ask Turnbull about one of the most controversial issues to have recently affected the project.

On Wednesday this week, NBN Co took the extraordinary step of hiring one of the most senior executives of media organisation News Corp Australia to be its new chief financial officer, in a move which caused an instant uproar in Australia’s technology sector, as it bolstered theories about the Coalition having a close connections with the Murdoch publishing empire. The executive, long-time News Corp CFO Stephen Rue, has strong credentials as a chief financial officer but does not appear to have experience in the telecommunications sector.

The news of Rue’s appointment was interpreted by much of Australia’s telecommunications sector as confirming what had previously been seen as speculation or even conspiracy theory that the current Coalition Federal Government was seeking to water down Labor’s ambitious FTTP NBN project to protect the existing interests of industry giants such as News Corp, especially the company’s Foxtel cable television joint venture with Telstra.

Speaking in Senate Estimates last week, ABC managing director Mark Scott insisted there was no “conspiracy” to censor coverage of the NBN topic on the broadcaster’s shows, stating that the ABC had published some 150 articles on the topic since September last year.

“There’s no overarching policy or direction around coverage of NBN issues. Our editors, our executive producers, our journalists exercise their editorial judgement under the window of our editorial policies on which they operate on stories … I am aware that there are people in the technology press who would like us to cover NBN issues all day every day. Our editors and producers make their editorial judgement, and they have no overarching instructions in doing so.”

opinion/analysis
If I was writing a murder mystery, this would be the point where I would suck on my pipe and utter darkly … “and the plot thickens further”.

Last night we saw, yet again, one of the ABC’s flagship shows fail to substantially discuss the NBN topic with the portfolio Minister responsible for it. For God’s sake, 7:30 actually scheduled an interview with Turnbull specifically on the topic of the NBN earlier this week, as the Minister himself said on air — and then spent the vast majority of the interview time pressuring Turnbull about his spat with Andrew Bolt and Alan Jones. When host Sarah Ferguson did get around to talking to Turnbull about the NBN — for the first time in 2014 — the host allocated just several minutes to discuss the topic.

In addition, Ferguson failed to ask Turnbull about the most controversial issue in the NBN area this week — the hotly debated appointment of a long-time senior News Corp lieutenant to the post of NBN Co CFO. I can tell you that that news of that appointment has been a huge traffic generator for Delimiter this week. The Australian public is deeply interested in it. And yet it was ignored last night — just like Lateline host Tony Jones ignored the issue of NBN Co turfing three of its most senior executives, when he interviewed Turnbull on April 10 this year, the day that move was announced.

At the same time, we have Turnbull actively cancelling no less than four scheduled interviews with the ABC over the past month since the Federal Budget, leading to those shows also lacking coverage of the NBN topic.

To be honest, I don’t quite know what to think of all this.

Clearly, as I’ve pointed out previously, the ABC is lacking in-depth NBN coverage right now. When it does cover the topic, as we saw last night, that coverage is often tokenistic and and overshadowed by other political matters. I don’t blame the broadcaster for covering a cat fight between conservative politicians and the commentators who normally support them (who isn’t interested in that?!) … but I wouldn’t like coverage of Australia’s largest ever infrastructure project to suffer as a result, as it clearly did last night on 7:30. And clearly Turnbull has also tried to rein in some of his media appearances, perhaps spurred by commandments being issued by Tony Abbott’s office.

However, the reasons why all this is occurring continue to be wreathed in mist. I’d love to have been privy to 7:30’s editorial discussion before the Turnbull interview last night. One does wonder why, after not having covered the NBN at all this year, the show finally asked the Communications Minister on to discuss the topic, and then ended up discussing the NBN for a mere couple of minutes. The mind boggles. I mean, it’s not as if the Member for Wentworth is in charge of a $30 billion, highly controversial, national infrastructure project, or anything. Oh, that’s right …

Image credit: Screenshot of 7:30 broadcast, believe to be covered under Fair Dealing