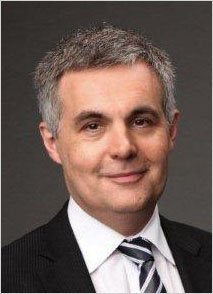 news The National Broadband Network has taken the extraordinary step of hiring one of the most senior executives of media organisation News Corp Australia to be its new chief financial officer, in a move which appears destined to bolster theories about the Coalition’s close connections with the Murdoch publishing empire.

This morning NBN Co announced the appointment of Stephen Rue to the position of chief financial officer. In a statement, NBN Co’s new chief executive Bill Morrow said:“Stephen is a well-credentialed senior finance executive who has managed a business through a complex and high profile transformation. His transparent approach is welcome at a time NBN Co continues to accelerate on its delivery. Stephen is an enthusiastic and engaging executive and I look forward to working with him.”

Rue will report directly to Morrow as a member of NBN Co’s Executive Committee and will join the team on 1 July.

Rue is well known in Australia’s media landscape as one of the most senior executives at News Corp Australia, the local division of global media organisation News Corp. His LinkedIn profile shows that he served the publisher as chief financial officer from June 2003 through September 2013. He held other senior roles at News Corp dating back to 1998, and served as a director of the company’s joint venture Foxtel for a year until September 2013.

The executive was also chairman of the Melbourne Storm for three years from mid-2010, and has a history as a senior audit manager at accounting firm Arthur Anderson through the 1980’s and 1990’s.

The news of Rue’s appointment will be interpreted by much of Australia’s telecommunications sector as confirming what had previously been seen as speculation or even conspiracy theory that the current Coalition Federal Government was seeking to water down Labor’s ambitious FTTP NBN project to protect the existing interests of industry giants such as News Corp, especially the company’s Foxtel cable television joint venture with Telstra.

A comprehensive study of public attitudes towards Labor’s National Broadband Network project published in February by the University of Melbourne found the initiative enjoyed very high levels of widespread public support from ordinary Australians, despite what the study described as an “overwhelmingly negative” approach to the project by print media such as newspapers, including News Corp newspapers such as The Australian and the Daily Telegraph, which have run consistent campaigns against the NBN project.

Under the Coalition’s current broadband policy, which has been modified drastically since the Federal Election, NBN Co is likely to acquire the HFC cable networks owned by both Telstra and Optus, entrenching the strength of those networks and making them the default mode of network access in much of Australia’s metropolitan area. Foxtel uses Telstra’s cable network currently, as well as satellite access in rural areas, to distribute its content to customers.

Rue’s appointment runs directly contrary to comments made by Communications Minister Malcolm Turnbull prior to the election that he would seek new management for NBN Co which had direct experience with the telecommunications sector, with Rue appearing to lack such experience. In addition, Rue’s appointment also comes as a number of executives who have had close links to Turnbull or the Coalition have been appointed to senior positions at NBN Co.

opinion/analysis
Wow. Just wow. The message being sent here couldn’t possibly be clearer. And I think at this point we can all see what it is. I am sure Stephen Rue is a highly competent and respected executive in his field. But just wow.