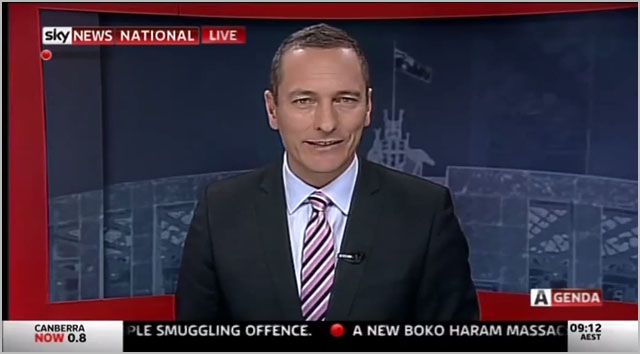 news A host on pay TV channel Sky News last week defended the new Coalition Government’s unpopular radical overhaul of Labor’s NBN project and subsequently shut down discussion of it during a live interview with Shadow Communications Minister Jason Clare, as controversy continues to swirl about the extent to which mainstream media is censoring coverage of the project.

Last Thursday, veteran political reporter Kieran Gilbert (pictured) hosted a segment on the Sky News AM Agenda show where he interviewed Shadow Communications Minister Jason Clare. Gilbert is Sky News’ chief political correspondent and has been a member of the Canberra press gallery since 2003.

The interview — which Clare has posted on his YouTube channel in full — largely focused on the budget, with Gilbert asking Clare questions regarding taxation and infrastructure spending. However, towards the middle of the interview, in response to a question about infrastructure, Clare raised the issue of the National Broadband Network, which is his key portfolio responsibility.

“… my main concern is the biggest and most important infrastructure project in Australia — the National Broadband Network — and Tony Abbott thinks it’s just a big video game machine,” the Labor MP said. “He doesn’t understand how important it is and if Tony Abbott thinks he is going to be the infrastructure Prime Minister of Australia then he needs to build the NBN, not wreck it.”

Gilbert responded that the Coalition was “obviously still committed to a broadband network”, and claimed that as Clare knew, “it’s just they hope to have a less expensive version of it”.

Clare responded that the Coalition’s version of the NBN would be “a second rate version”, relying partially on Telstra’s existing copper network. “If you want to look at what’s more important, the NBN will be cheaper to build over the next ten years than the Paid Parental Leave Scheme,” the Shadow Minister said.

Upon this statement, Gilbert further defended the Coalition’s new approach to the NBN project, stating that “it’s not just copper, it’s a combination of all sorts of technologies, including fibre to the node”. When Clare objected, Gilbert said he didn’t “want to get caught up on the NBN,” and shifted the topic of the interview to family welfare payments.

Gilbert’s approach netted him a clutch of negative comments on YouTube. “It’s like the host doesn’t even pretend not to be partisan re: NBN,” wrote one commenter. “Did Murdoch supply the questions on the NBN?” added another. “Watching this reminds me why I never would consider pay TV in this country.”

The situation mirrored a similar situation several weeks ago when news the ABC’s flagship panel discussion program Q&A appeared to actively censor the National Broadband Network issue from being discussed on an episode featuring Communications Minister Malcolm Turnbull; ignoring a flood of questions from viewers prior to its filming, leaving the issue out of pre-show briefing documents and shutting down discussion on air.

Q&A’s approach to the NBN issue generated a degree of controversy on social media. “Almost like they went out of their way to change topic. Van tried, but got shot down,” wrote one commenter on Twitter. “Host appeared to be acting on instructions to shut any NBN discussion down,” wrote another.

The ABC subsequently denied it censored the National Broadband Network issue from being discussed on Q&A due to any arrangement with Communications Minister Malcolm Turnbull, stating that it merely ran out of time to air a question on the topic.

In Opposition, Turnbull regularly criticised the ABC for what he believed was a stance the organisation had taken in favour of the flagship Labor project. The news also comes as the Coalition Federal Government has also been reported to be considering cuts to the ABC’s budget.

Turnbull has no authority directly over Sky News, with the organisation being a joint venture between UK operator BSkyB and channels Seven and Nine in Australia. It is not clear how the rollout of either versions of the NBN would affect Sky’s success in Australia.

The news also comes several months after a new comprehensive study of public attitudes towards Labor’s National Broadband Network project published by the University of Melbourne found the initiative still enjoys very high levels of widespread public support from ordinary Australians, despite what the study described as an “overwhelmingly negative” approach to the project by print media such as newspapers.

opinion/analysis
I have been very hesitant in the past to believe the conspiracy theories floating around about various publishers and media organisations wanting to shut down Labor’s National Broadband Network project to prop up their own commercial interests. There is not a great deal of evidence to support the claim that journalists and executives at companies such as News Corporation, Fairfax, Foxtel and so on have been ordered from the top to take an antagonistic approach to Labor’s NBN project.

And I also must note here that there is no suggestion that veteran political reporter Kieran Gilbert has acted unethically. It appears that Gilbert did not invite Clare on specifically to talk about the NBN, and that he wanted to concentrate on other, topical subjects on hand. In this vein, his move to shut down Clare’s segue into NBN issues is understandable. Gilbert is a well-respected and professional reporter and host and I certainly don’t think he did anything wrong here.

However, it’s also becoming impossible to ignore the fact that, regardless of the reasons why, we are certainly seeing discussion of the NBN issue in general actively shut down by the mainstream media as a high-level trend. We saw it on Q&A several weeks ago, we see it daily in the major newspapers — who, even if they will cover the NBN, tend to criticise it heavily and support the Coalition’s ridiculous revamp of the project — and now we’re seeing it also on the nation’s main subscription TV news channel.

We have now, over a period of two weeks, seen two very concrete examples where Australia’s Federal Communications Minister and Shadow Communications Minister have been invited onto major national TV interview programs, only to have any discussion of the NBN — their main policy area and Australia’s largest ever infrastructure project — shut down completely on air by the host by the host.

It may be possible to understand some of the specific reasons this is happening. But as a gross trend, it’s appalling. Malcolm Turnbull is Australia’s Communications Minister. What sort of questions do we really think we should be asking him? Jason Clare is his Shadow. What sort of issues do we really expect Clare to raise in a live interview context? The NBN is clearly the most important issue which either of these two politicians could talk about. And yet Sky News and the ABC both appear to see the issue as only a minor one. It’s a disturbing situation; and I will continue to point it out as we see further examples of the trend.