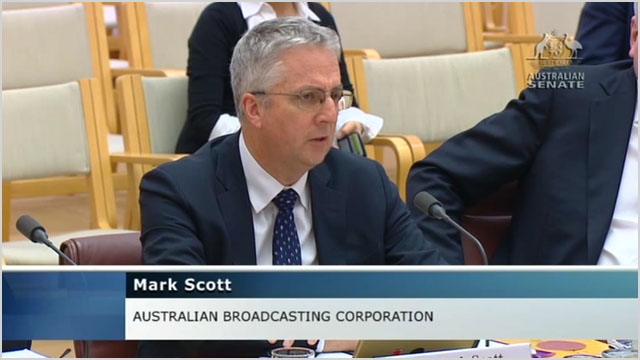 news Mark Scott appears to have unintentionally misled the Federal Senate about the degree to which the broadcaster’s Q&A program covers the National Broadband Network issue, with the ABC managing director yesterday erroneously claiming that Communications Minister Malcolm Turnbull had faced “many questions” about the issue on the show.

Yesterday, Labor Senator Anne Urquhart directly raised the issue of the ABC’s coverage of the NBN issue in a Senate Estimates session, asking a series of pointed questions about whether the ABC had a discrete editorial policy on the topic, why a pro-NBN article written by Lateline co-host Emma Alberici had been held over and published after the September Federal Election, and whether the issue of its NBN coverage in general had been investigated by the ABC.

The questions came after Delimiter revealed over the past several weeks that several of the ABC’s flagship current affairs programs were largely ignoring the Coalition’s radical reshaping of Labor’s popular NBN policy. Q&A host Tony Jones has also actively shut down discussion of the topic on the show several times, despite it explicitly being raised by participants and the audience.

In response to the allegations specifically about Q&A, Scott specifically repeated the claim yesterday that Turnbull had fielded questions on the show about the NBN “many” times. The full video of Scott’s appearance can be watched online through YouTube. There are two sessions — Part 1 and Part 2.

“I’m sorry that people didn’t think we covered the NBN enough on that particular occasion,” Scott said, referring to one controversial Q&A episode in late April this year where host Tony Jones shut down questions to Turnbull from commentator Van Badham on the topic. “On many other occasions we have. I’m sure Mr Turnbull will be back on Q&A, I’m sure there will be opportunities for him to engage on the NBN again.”

However, analysis of Turnbull’s appearances on Q&A show that the ABC managing director’s statement about how many times the Liberal MP has discussed the NBN topic on the show was factually inaccurate.

Turnbull was appointed Shadow Communications Minister in September 2010. Since that time, the Liberal MP has appeared on Q&A 12 times, or every few months. Despite the repeat appearances, on only three occasions — 28 April 2014, 10 February 2014 and 8 July 2013, did Q&A allow a formal question about the NBN topic to be asked by the audience. Turnbull’s appearances on Q&A while in the Communications portfolio are tabled below.

On two of those three occasions, host Tony Jones actively curtailed discussion on the NBN, allowing only very limited discussion of the topic, and only allowing Turnbull personally to respond to the issue at length, with other panellists only having very limited input.

Delimiter has recently discovered that the NBN topic was also raised on Q&A on 10 June 2013, informally by Labor MP Craig Emerson. However, as on two other occasions on 10 June Jones again actively shut down discussion of the NBN debate on the show after only a very brief discussion, with the Q&A host stating that the NBN topic was a “side debate”.

This means that out of 12 appearances on Q&A since being appointed Shadow Communications Minister in September 2010, on only one occasion did Q&A allow a discussion of more than several minutes to develop about the NBN; and on only one occasion did Turnbull face signficant questioning on the issue — not the “many” occasions which Scott yesterday claimed.

Delimiter’s reporting has also highlighted the fact that the ABC’s flagship current affairs show 7:30 is particularly ignoring the topic of the NBN. 7:30 has not yet covered the NBN as a specific topic in 2014, despite the wide-ranging changes which the Coalition has made to the project and despite the fact that Turnbull has personally made several major policy announcements affecting it (see here and here). The lack of coverage also comes despite the fact that the NBN remains Australia’s largest ever infrastructure project.

Similarly, 7:30 only covered the NBN as a specific topic a handful of times throughout the 2013 calendar year, and coverage of the project at those times was typically largely limited to major announcements regarding the project, or Coalition criticism of Labor’s administration of the project.

In response to general allegations about the ABC’s NBN coverage, Scott yesterday stated that the broadcaster had “no specific policy on coverage of the NBN as an issue”, with the topic being covered, like all other topics, under the ABC’s general editorial policies.

Scott noted that the ABC had audited its NBN coverage. “It’s been investigated and we’ve said that we’ve produced over 150 NBN stories across radio, television news and current affairs and online since September since last year. It doesn’t sound to me that we’re avoiding the topic at all,” he said. “The bulk of those current affairs stories relate to policy and governance, they’re the current affairs stories. The bulk of the news stories relate to the rollout and construction of the NBN across the country.”

“There’s no overarching policy or direction around coverage of NBN issues. Our editors, our executive producers, our journalists exercise their editorial judgement under the window of our editorial policies on which they operate on stories.”

In terms of the delay with respect to Alberici’s article, Scott said that speaking broadly, in his experience in newsrooms and news operations, “many times stories are created and then they are often held because there are often more pressing news stories that have to go to air, and they run when there’s a window to run them.”

“I’m not a close student of the blog or the website, Senator,” Scott added, referring to Delimiter, “but I am aware that there are people in the technology press who would like us to cover NBN issues all day every day. Our editors and producers make their editorial judgement, and they have no overarching instructions in doing so.”

“I know that there are some technology blogs out there who are somewhat fevered about coverage of the NBN, as is their wont. That’s their beat. But there are other questions, there are other matters of public importance, and Q&A on [28 April 2014] covered those other matters. There’s no greater conspiracy that’s lying behind it.”

One ABC journalist who had formerly been reporting on the NBN, the editor of the broadcaster’s Technology & Games site Nick Ross, has largely backed away from the topic following an investigation of his coverage by Media Watch. Scott took several questions on notice as to whether the ABC had prohibited Ross from writing about the NBN previous to the Federal Election.

Delimiter has sought to contact the ABC to request Scott correct his comments regarding Turnbull’s appearances on Q&A.