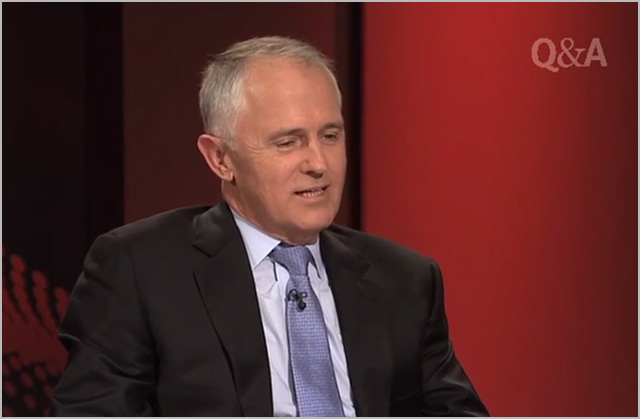 as quite a few readers have written to me requesting that I highlight this, I thought I would do a quick post noting that Communications Minister Malcolm Turnbull will be appearing on the ABC’s Q&A program tonight. If you have questions that you would like to see the Earl of Wentworth respond to, on any issue, but especially the hot button topic of broadband policy, then I recommend you submit those questions as soon as possible online here.

To make this easier for y’all, I’ve included a list of questions below which you can draw inspiration from:

To be honest, I don’t anticipate getting any satisfactory answers to these questions. When it really boils down to it, it is apparent that many of the decisions being taken with regard to NBN Co right now relate to politics, the over-zealous application of ideology, or even just sheer bloody-mindedness from a senior politician who often seems determined to believe that he is right, despite evidence to the contrary.

Malcolm Turnbull is one of Australia’s most successful politicians, as well as being an able businessman and lawyer. In person he is charming and has certainly displayed his gift for the gab on Q&A many times before. Each time he’s been on the show, the Member for Wentworth has typically been able to use populist humour to charm the audience and duck the hard questions about actual issues that matter. The brief back and forth discussion format of the show means that such entertainment is usually rewarded, while deeper issues often go unaddressed.

I don’t expert tonight’s performance to be any different. Turnbull will probably escape unscathed. Then too, Turnbull has been asked some of these questions before. Sometimes his answers haven’t made much sense. And the consequences have not been severe.

But despite this, it’s worth submitting some NBN-related questions to Q&A anyway. We live in a first world democracy; a privilege not shared by every human being on this planet. While I suspect most Australians find the current state of that democracy to be distasteful due to the lack of integrity being shown by our political leaders, one thing is certain: If we do not utilise our democratic rights — fundamental freedoms such as voting and questioning public figures through forums such as Q&A — then those rights will eventually be taken away from us. We need to let those in power know that we are watching. Historically, it is the only factor which has kept them within the bounds of rationality.