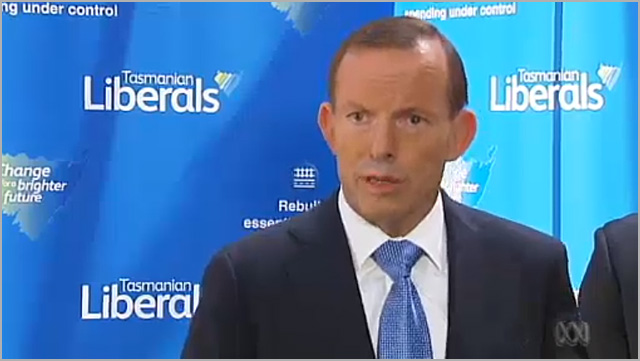 news Prime Minister Tony Abbott has repeatedly declined to directly address questions about whether the Coalition deceived Tasmanian voters with respect to its support for an all-fibre broadband rollout in the state, in a tense press conference over the weekend in which journalists couldn’t stop asking about the topic.

Many Tasmanians believe the Coalition, specifically Communication minister Malcom Turnbull, committed the Coalition’s Broadband Network rollout (CBN) in the state to a full Fibre to the Premises (FTTP) deployment during last year’s Federal Election. However, in fact, Turnbull never explicitly made such a promise; stating only that a Coalition Government would honour construction contracts signed by NBN Co. Some Tasmanians took this statement to mean that the Coalition would commit to a full FTTP rollout in the state.

Speaking on ABC Radio in Tasmania this month, NBN Co executive chairman Switkowski confirmed Fibre to the Node would be used in Tasmania. However, the issue is still a hot one in Tasmania, which is shortly slated to head to its state election. At this stage, every political party in Tasmania has lined up in support of a full FTTP broadband rollout in the state, including Tasmanian Liberal Leader Will Hodgman, who said last week that the broadband issue could lead to the Liberals in the state losing the election.

Subsequently, Tasmanian Labor Premier Lara Giddings offered NBN Co free access to the overhead power poles of state-owned energy utility Aurora to incentivise a full rollout of Fibre to the Premises broadband in the state, as part of a package of technology policy promises associated with the State Election.

The deployment style mimics a trial carried out back from 2005 under Giddings’ watch as then-Tasmanian Minister for Economic Development. Called tasCOLT for the Tasmanian Collaborative Optical Leading Test-bed (PDF), the trial deployed optic-fibre broadband to some 1,250 premies throughout the suburbs of New Town, South Hobart and Devonport. At the time, Tasmanian electrical utility Aurora provided the infrastructure, with its retail telecommunications arm TasTel providing ISP services over the network. A full report on the trial can be found online here in PDF format.

Late last week, and following discussions with Hodgman, Turnbull finally confirmed he had spoken to NBN Co about the possibility of conducting FTTP trials in the state that would test Labor’s plan to deploy fibre on aerial electricity poles.

On Saturday, Prime Minister Tony Abbott held a joint press conference with Hodgman at the Tas Live Abalone facility in Hobart. The event was dominated by questions about the broadband issue. You can read the full transcription here, and some of the footage is hosted by the ABC here.

And a third asked: “Has Will Hodgman spoken to you about how politically damaging it might be if the NBN isn’t rolled out fibre to the home down here?”

In general, Abbott did not directly address the issues being raised. For example, on the issue of how politically damaging the FTTP issue could be in Tasmania, Abbott claimed that the rollout of Labor’s National Broadband Network project in Tasmania “stopped in July” and “was not going to start again” because of the “utter incompetence and ineptitude” of Labor and the Greens.

“It has started again, because Malcolm Turnbull has got it going,” said Abbott. “I give this guarantee – under the Coalition we will get the NBN going again and we will roll out the NBN past more houses in the next 12 months than Labor managed in the last five years.”

And asked about the previous Aurora trial — the fourth straight question on the broadband topic — Abbott appeared to lose patience on the issue.

“I think we’ve had a good go on this issue and we’ll go on to other issues if you don’t mind,” he said, stating that Tasmania would be better off with a Liberal Government because it could work better on the issue of broadband with a Coalition Federal Government. “If you want things done, if you want to go ahead as a State and as a nation let’s have the State Government and the Commonwealth Government working together,” he said.

However, the journalists at the press conference refused to stop asking questions about broadband.

“Do you accept that it’s a broken promise to no longer commit to full fibre to the premises rollout given what was said by Liberal Party candidates and members before the election?” asked another journalist.

Abbott concluded his press conference by once again avoiding giving a direct answer on the Tasmanian FTTP issue and whether the Coalition had misled voters on the issue.

opinion/analysis
I’m planning a longer article on this topic today for Delimiter 2.0, but let me just say that this is the issue which refuses to go away for the Coalition in Tasmania. Abbott’s refusal to answer questions on the topic speaks volumes about the Coalition’s approach to the issue. Sure, Labor poorly managed the NBN rollout — that’s a legitimate criticism. But at least it didn’t actively mislead the Australian population (much) about that the issue. Turnbull and Abbott appear to be doing everything they can to play down this situation in Tasmania, but the truth is that this month’s events are likely to start to play out on the mainland before long. And the Coalition’s statements about “honouring” NBN contracts before the Federal Election will continue to haunt it.