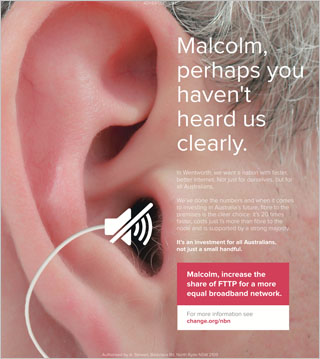 news The group of pro-fibre National Broadband Network activists planning to publish advertisements in the local newspaper of Communications Minister Malcolm Turnbull have revealed the creative they will use to target the Liberal MP, headlining their ads with the admonition: “Malcolm, perhaps you haven’t heard us clearly.”

At the same time, evidence has grown of a groundswell of popular opinion supporting Labor’s FTTP-based NBN model. In early September, an online petition on the issue garnered more than 260,000 signatures. The petition in general was rejected by Turnbull, but it continues to be cited by commentators as a key indicator of the popularity of Labor’s NBN vision.

Several weeks ago, a group of activists who dubbed themselves the ‘Saving the NBN campaign’ posted a campaign on crowdfunding site indiegogo, calling for donations to place advertisements in the Wentworth Courier newspaper, which is distributed in Turnbull’s electorate in inner Sydney, supporting a FTTP model for the NBN.

Today, the activists released the creative which they intend to target Turnbull with (PDF). It states:

“Malcolm, perhaps you haven’t heard us clearly. In Wentworth, we want a nation with faster, better Internet. Not just for ourselves, but for all Australians. We’ve done the numbers and when it comes to investing in Australia’s future, fibre to the premises is the clear choice: It’s 20 times faster, costs just one third more than fibre to the node and is supported by a strong majority. It’s an investment for all Australians, not just a small handful. Malcolm, increase the share of FTTP for a more equal broadband network.”

The group’s original fundraising target was $15,000. However, the campaign quickly smashed the initial target and have now raised almost $60,000 for the campaign fund.

Telecommunications engineering student Alex Stewart has teamed up with petition starter Nick Paine and other campaigners to keep up the pressure on Turnbull. In a statement released today along with the ad creative, Stewart said the next phase of the campaign was asking Turnbull to stop ignoring the depth of feeling on this issue, and increase the share of FTTP in the NBN.

“Malcolm has said that he’s not interested in politics – neither are we – we simply want him to listen to Australian’s who are asking for the best technology solution in the NBN,” said Stewart. “We’re asking him to put the politics aside, and get this decision right.”

The campaigners have also started putting together a strategy to target the government’s most marginal seats and ask those MPs to represent their views to Mr Turnbull.

Nick Paine, the original petition starter said he was blown away by the success of the campaign. “I started this petition because I believe that a better NBN, with more fibre to the premises, will mean greater opportunities for Australia,” he said. “It’s amazing to see how much support has poured in and how enthusiastic people are about this campaign.”

Karen Skinner, Australian Country Director for change.org said the continuation of the campaign was a great step that had shown the power that comes from petitioning. “Every day, people are starting petitions on change.org, and watching them grow by sharing them with their family and friends,” she said. ““That’s building new communities who are organising for action using online tools.”

opinion/analysis
I can already tell you what Turnbull’s reaction to these ads will be: He will ignore them. As the Minister said in early September regarding the change.org petition:

“Last Saturday there was a general election at which the NBN was one of the most prominent issues. The Coalition’s NBN Policy – which can be read here had been published in April – five months ahead of the election. The Coalition won the election,” said Turnbull.

“The promoters of this petition apparently believe that we should ignore the lengthy public debate on the NBN that preceded the election and also ignore the election result. We should within days of the election walk away from one of our most well debated, well understood and prominent policies. Democracy? I don’t think so.”