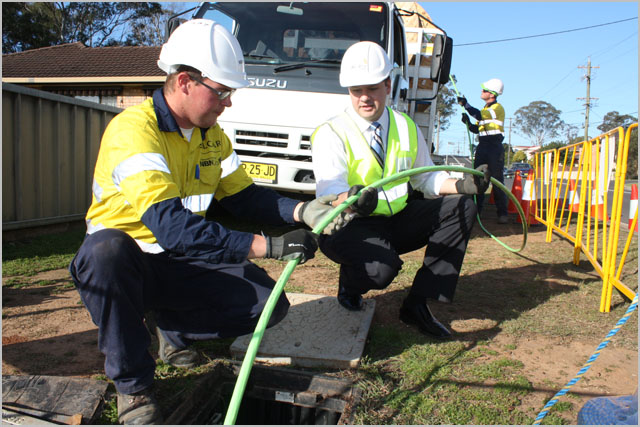 news One of Labor’s newest recruits to the broadband portfolio has accused Shadow Communications Minister Malcolm Turnbull of “telling porkies” and “complete fabrications” with respect to the Liberal MP’s statement that businesses in key areas such as CBDs would not need to pay extra to have fibre connected to their premises under the Coalition’s rival NBN policy.

The Coalition’s NBN policy is largely based on fibre to the node technology, which will see fibre extended from telephone exchanges to neighbourhood ‘nodes’ and the existing copper cable used for the remainder of the distance to premises. In comparison, Labor’s current NBN project is predominantly based on an all-fibre premise.

However, Turnbull has regularly stated over the past several months that the Coalition would extend fibre all the way to premises in areas where it was sensible to do so — for schools, hospitals and universities, for example, as well as business areas which had greater bandwidth needs (especially for symmetrical upload/download speeds) than those commonly ascribed to consumers.

For example, in an interview on ABC Radio this week, Turnbull said the Coalition would “build fibre to the premises wherever there is a demand for it”. “So businesses, industrial parks like a VW or an Amazon, datacentres, greenfield sites, you know, schools, universities, whatever,” Turnbull said.

However, in a statement issued this morning, Husic accused Turnbull, who he described as “Malcolm in a muddle” of “telling porkies about his own broadband policy to try and hide the fact the Coalition is selling a lemon to the Australian people”, additionally describing Turnbull’s statements on fibre where there was demand as “a complete fabrication”.

Husic pointed out that there was no stipulation for such fibre extensions in the Coalition’s formal broadband policy released in April (PDF). Specifically, on page 7 of the document, the Coalition’s policy states that fibre to the premises “should be deployed in new (‘greenfield’) housing estates and wherever copper has to be replaced”. The document additionally makes provision for fibre on demand and co-funded fibre, where private parties or separate governments could help fund fibre to the premises in certain areas, but it does not appear to explicitly deal with the scenarios raised by Turnbull, where fibre could be extended to schools, and hospitals, for example, or city central business districts or business parks.

“Apart from premises already connected to fibre by Labor and a handful of unspecified areas with degraded copper, the Coalition will not connect any existing homes or businesses directly to fibre,” said Husic. “All other Coalition cases of connecting fibre to existing premises are either through fibre on demand, which slugs homes and businesses as much as $5000 each to connect, or “co-funded”.

“Malcolm is in a muddle. He has either not read his policy document properly, is deliberately misleading the public, or is facing a cost blowout. “I can understand he’s embarrassed about this massive flaw in the Coalition broadband plan, but he should just be upfront about it. Malcolm Turnbull should also stick to the facts when debating Labor’s NBN, not making up false figures to try and distract from his own defective plan.

Husic added that Turnbull had recently made the “outrageous” claim that it would take NBN Co as much as 50 years to complete the NBN rollout. Opposition Leader Tony Abbott has recently claimed the NBN would take 80 years to complete in Tasmania. “This is despite knowing full well that the network is on track to be completed to all Australians by 2021,” said Husic.

“I can understand Mr Turnbull’s embarrassment at having to defend his inadequate plan, but he should do so without blatant falsehoods and misrepresentations.”

Delimiter has requested a response from the office of Malcolm Turnbull.

opinion/analysis
On the face of it, Husic is correct. I had a look, and I cannot find anywhere in the Coalition’s NBN policy document which directly backs Turnbull’s statements that the Coalition is planning to connect fibre all the way to the premises in areas such as schools, hospitals and business districts. Instead, the document pretty clearly focuses on fibre to the node, and ‘co-funded’ FTTP of some kind.

However, whether you agree with Husic also depends to what extent you believe that a political party’s policies are only enshrined in their policy documents. Turnbull has made this claim in public many times since the Coalition first released its NBN policy — it’s not a new aspect of the Coalition’s plan at all. And personally, I don’t just consider policy documents themselves to be the only standard when it comes to political parties’ policies. We must also consider the statements of the policymakers themselves. Turnbull has made this claim in public a great deal — and personally, I therefore consider it to be policy.

I would make two further points on this issue. Firstly, there is a wider truth to Husic’s statements. Turnbull does need to eventually codify the Coalition’s plan to make FTTP available where there is demand. A process will need to be put in place to correctly identify which areas will need FTTP and which will be OK with FTTN, and that process need to be formalised and codified so that the public can understand it. The alternative will be something like chaos — as individuals and organisations right around Australia, from tiny city councils to business parks and TAFE colleges to larger groups — clamour for FTTP. With no rules in place on this issue, the Coalition’s plan will flounder.

Secondly, there is the political angle. Husic’s been on board as Parliamentary Secretary for Broadband now for a month, and so have his Labor colleagues in the portfolio — Anthony Albanese, Kate Lundy and Sharon Bird. What we’re starting to see from Labor when it comes to the NBN is not just one occasional attack on Turnbull and the Coalition NBN policy, but repeated attacks from different MPs. Stephen Conroy was just one man as Communications Minister. However, now there are four Labor parliamentarians all attacking the Coalition on the NBN issue. And I have a feeling that even Turnbull, with his masterly media management skills, is starting to be a little swamped.

As I wrote in this morning’s profile of Husic for Delimiter 2.0 (paywalled), even Husic himself is quite a lot to handle, with his energy and experience. But four politicians on the NBN at once? Finally, Labor is starting to exploit the obvious holes in the Coalition’s NBN policy. I suspect Turnbull will eventually need some help to keep the Coalition’s head above water in this portfolio.