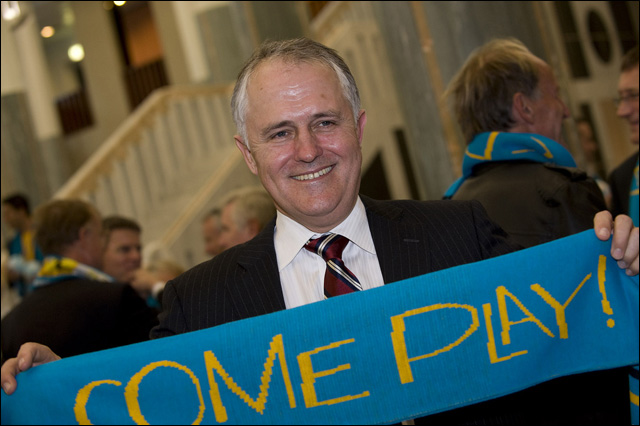 news Malcolm Turnbull has sternly rejected an online petition which has so far garnered more than 200,000 signatures calling for the Coalition to support Labor’s all-fibre NBN policy, with the Communications Minister-elect claiming it wouldn’t be “democracy” for the new Coalition Government to reverse the rival NBN policy it took to the election.

Since the Coalition won power on Saturday, a vigorous online movement focused on getting the new Abbott administration to abandon its own National Broadband Network policy and support Labor’s existing vision has been gaining force. Supporters of Labor’s vision argue that it will serve Australia’s long-term interests much better, as it features an all-fibre NBN, delivering a more reliable network and faster speeds.

The Coalition’s version of the NBN policy will see part of Telstra’s existing copper network maintained, in what is termed a ‘fibre to the node’ deployment. The model has been extensively and successfully deployed in countries such as the UK, but Australian proponents of Labor’s policy have highlighted the fact that it offers limited speed boosts over currently available broadband in Australia (up to 100Mbps as a top-end limit), compared with Labor’s NBN, which will offer enhanced levels of reliability and speeds up to 1Gbps, coupled with significantly enhanced upload speeds.

A petition placed on popular website Change.org on the issue following the election, demanding the Coalition reconsider the FTTN technology and focus on the superior FTTP option, has already garnered in excess of 200,000 signatures, with tens of thousands more Australians putting their names to the issue every day.

In addition, an online poll taken by the Australian Broadcasting Corporation this week showed Australians overwhelmingly believe focusing on the National Broadband Network should be Prime Minister-elect Tony Abbott’s highest priority in his first 100 days in office, eclipsing issues such as education, the carbon tax, border protection and the environment.

However, in a statement posted on his website tonight, Turnbull rejected the Change.org petition.

“Last Saturday there was a general election at which the NBN was one of the most prominent issues. The Coalition’s NBN Policy – which can be read here  had been published in April – five months ahead of the election. The Coalition won the election,” said Turnbull.

“The promoters of this petition apparently believe that we should ignore the lengthy public debate on the NBN that preceded the election and also ignore the election result. We should within days of the election walk away from one of our most well debated, well understood and prominent policies. Democracy? I don’t think so.”

Turnbull acknowledged the NBN debate was not over — despite it having raged over the past eight years, since then-Telstra chief executive Sol Trujillo first proposed a FTTN NBN for Australia in 2005.

However, the Liberal MP said, he was determined that from now on the debate should “at least” be fully informed, because the Coalition was planning to conduct a strategic review within the next 60 days which would show how long it would take and how much it would cost to complete the NBN on current specifications. “We will also set out what our options are to complete the project sooner and more cost effectively and again what that means in terms of affordability and of course in service levels,” Turnbull said.

“Many of the FTTP supporters on Twitter and elsewhere say that they don’t care what it costs or how long it takes – they want fibre to the home regardless. That point of view is reckless in the extreme. Every public infrastructure project has to be carefully and honestly analysed so that governments, and citizens, can weigh up the costs and benefits.”

“This study is vital for the public to be fully informed and our redesign of the project will be informed by the result of those studies.”

Turnbull claimed the Coalition did not regard technology as an “ideological issue”, and was “technologically agnostic”. “We want to ensure that all Australians have very fast broadband as soon, as cheaply and as affordably as possible,” the Liberal MP said. “The NBN project at present is running over budget and way behind schedule. At the current rate of progress it will take decades to complete and close to $100 billion.”

“The Labor Government has not been honest with the public about the NBN. They never conducted a cost benefit analysis, they have sought at every turn to conceal the fact that the project has been failing to meet its targets.”