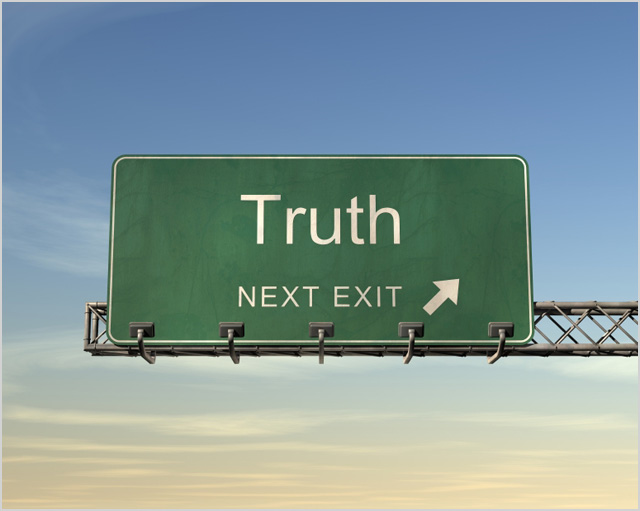 news The Australian version of pioneering US fact-checking website Politifact has given a “mostly true” rating to statement by Shadow Communications Minister Malcolm Turnbull that connecting to Labor’s NBN infrastructure will not be “free”, as various Labor politicians have claimed.

Over the past several months since the Coalition released its alternative NBN policy in April, both sides of politics have ramped up their use of promotional brochures and media statements to push their view that their policy is the better one. One of the prevailing claims which has been made by Labor party politicians is the statement that connecting to Labor’s version of the NBN will be “free” to residents and businesses, while substantial costs will accrue to Australians connecting to the Coalition’s NBN infrastructure.

Politifact has already fact-checked Labor’s claim that the Coalition’s NBN policy will see Australians charged $5,000 for access to fibre, finding the claim “mostly false”. However, the Coalition has also strenuously objected to Labor’s use of the word “free”, when applied to the cost of connecting to Labor’s infrastructure.

For example, in late May, the Australian newspaper first reported that Turnbull had written to Rod Sims, chairman of the Australian Competition and Consumer Commission, complaining that connecting to Labor’s NBN was “not free”, as to access the NBN, consumers must enter into an agreement to buy services from an ISP — such as Telstra or iiNet. Under both NBN policies, ultimately NBN Co will cover the cost of connecting the physical infrastructure to premises, be it fibre to the node or fibre to the home infrastructure, or even satellite or wireless access.

In the letter, which you can download in PDF format here, Turnbull alleged that the Australian Government, through its ministers, had contravened the Competition and Consumer Act, which prohibits organisations from making misleading or deceptive conduct.

“These statements include variants of the flagrant falsehood that ‘connection to the NBN is free’,” wrote Turnbull. “This claim is made by the Prime Minister, Ms Gillard, on her official Facebook page. Similar claims have been made by a number of other ministers, including the Minister for Broadband, Communications and the Digital Economy, Senator Conroy, the Minister for Families, Community Services and Indigenous Affairs, Ms Macklin, and the Minister for School Education, Early Childhood and Youth, Mr Garrett.”

“Connection to the NBN is not free. To be connected — and indeed to be able to physically attach a device to the NBN, given NBN Co’s publicly articulated construction strategies of ‘build-drop; and ‘demand-drop’ — a consumer must enter into an agreement with a Retail Serivce Provider for the latter to provide service. This, without exception, entails financial commitments that typically include initial fees and/or monthly service charges incurred over a contractually specified period.” 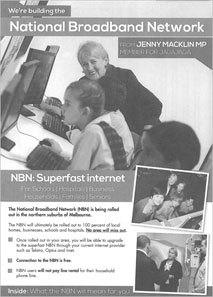 Turnbull particularly drew the ACCC’s attention to a claim contained in a brochure delivered by Macklin to residents (click image right for the full image), which includes the claim: “The NBN will deliver superfast, affordable and reliable broadband Internet to every home with a free connection.”

“This assertion, not even qualified by any caveat that such a connection must be a ‘standard connection’, is demonstrably false,” wrote Turnbull. “… We request that the Commission take appropriate action including requiring correction of the misleading statements and an undertaking that they will not be repeated.”

In its finding published this week, Politifact rated Turnbull’s statement mostly true, noting that “regardless of who wins government, consumers will need to pay to contract a retail service provider” for the privilege of connecting to the NBN. “Turnbull says ‘connection to the NBN is not free’,” Politifact wrote. “On being told they need to pay an RSP to get online, many consumers would probably agree.”

opinion/analysis
Upon initially reading Politifact’s analysis of Turnbull’s comments and the way Labor is promoting the NBN, I felt as though the fact-checking organisation had gone a little far in supporting Turnbull. It’s a fine point, after all, as to whether the Labor MPs are claiming that the physical act of connecting NBN infrastructure to premises is “free”, or whether they are also claiming that access to the NBN is free. Politifact noted in its analysis that Turnbull was somewhat conflating the two ideas, and I agree this is a bit of an issue.

But that was before I saw the precise brochures which Turnbull is complaining about.

If you look at what Jenny Macklin has sent to her constituents, for example, you would have to agree that Turnbull has a very valid point. Not only does Macklin baldly state (in bold font) that “Connection to the NBN is free”, but the MP also goes so far as to state that “NBN users will not pay line rental for their household phone line”.

This is, flatly, horseshit. Accessing the NBN is not free, and although some ISPs don’t have line rental fees on their telephone line services over the NBN, customers are still paying for those telephone lines through the cost of their broadband connection, which again, is not free.

There’s also a wider point to be made here. Labor is acting in many instances (and I’m talking here about the mass of Labor MPs rather than informed commentators such as Communications Minister Stephen Conroy) as though its version of the NBN is the only one to contain key policy outcomes such as faster broadband infrastructure being connected to every residence. But many of the outcomes from Labor’s NBN also apply to the Coalition’s version. Many aspects of the two policies are distinctly similar.

With this in mind, I’m forced to agree with Politifact here: Connecting to the NBN is not “free”, and Turnbull is mostly correct in his assertion that Labor MPs are misrepresenting the situation.

Do I expect the ACCC to do anything about the situation raised by Turnbull in his strongly worded letter? No. It’s not the regulator’s role to correct or fact-check political statements, and I have no doubt that the ACCC wouldn’t touch this situation with a barge pole. It would set a dangerous precedent if Sims was to take an activist role and get in-between warring political camps, after all.

Of course, none of this is to say that the Coalition hasn’t regularly come up with its own particular brand of horseshit when it comes to NBN statements. Turnbull’s comments are usually nuanced enough to be considered factual, but the same can’t be said for MPs like Christopher Pyne or Joe Hockey, who have less of a grasp of the details of the NBN. What goes around, comes around. The Coalition has plenty of form misleading the public about the NBN as well.