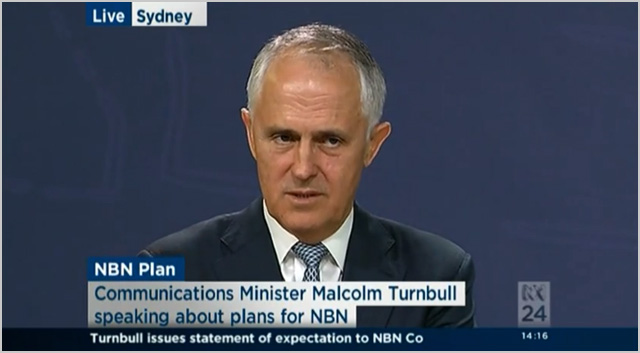 news Communications Minister Malcolm Turnbull appears to have drastically modified the Coalition’s policy stance on the National Broadband Network just weeks after the Federal Election, declaring the Coalition was not wedded to its fibre to the node model and was “thoroughly open-minded” about the technology to be used in the network.

The Coalition’s NBN policy document — available online in PDF format — was released in April and clearly states that the Coalition envisaged using so-called fibre to the node technology to upgrade Telstra’s existing copper network, instead of the more ambitious and technically superior fibre to the premises model being used under the previous Labor administration.

“… the bulk of established (‘brownfields’) premises are served by FTTN which accounts for more than two-thirds of the total rollout, and around 90 percent of extension of the fixed-line NBN to stand-alone dwellings between 2014 and 2019,” the document states. The document also clearly criticises Labor’s focus on FTTP technology as used in the NBN, stating that “there is no clear economic case or mainstream consumer demand for FTTP in most areas today”.

In addition, in Opposition as Shadow Communications Minister, Turnbull has consistently been critical of the Government’s focus on FTTP, claiming that it was too expensive and slow a rollout style to feasibly be used in Australia to address current broadband blackspots and slow speeds and that the FTTN model used in countries such as the UK represented a much more preferable option to upgrade Telstra’s copper network.

As recently as 2 September, for example, Turnbull claimed that the fibre to the premises technology used in Labor’s version of the NBN had been “largely superceded” by the Coalition’s preferred fibre to the node model, and that there wasn’t significant evidence to show that the higher capacity of FTTP was “necessary” or “valuable”.

However, asked about the future of the NBN yesterday during a press conference to release the new Coalition Government’s first formal Statement of Expectations document setting out the near-term future of the company (PDF), Turnbull appeared to completely reverse the Coalition’s hard-line stance on the use of FTTN in the future NBN rollout. The full video of the press conference is available online.

“As you know, as everyone knows, we’ve canvassed an example of that in our policy document, but let me say again, as I said to NBN staff today, I am, and the Government is, thoroughly open-minded, we are not dogmatic about technology; technology is not an ideological issue. We are completely agnostic about it. What we want to do is get the best result for taxpayers as soon as possible.”

This ‘technology-agnostic’ approach is also found in the Coalition’s Statement of Expectations document, issued by Turnbull and Finance Minister Mathias Cormann.

In the Coalition’s NBN policy document, it clearly states that a Coalition Government would issue a revised statement of expectations to NBN Co directing the company to provide broadband services with a minimum download data rate of 25Mbps by the end of 2016 in all areas of Australia, and 50Mbps by the end of 2019 in 90 percent of the fixed-line footprint.

While the policy document also states that the new statement of expectations would grant NBN Co’s board and management “flexibility and discretion in technology and network design decisions”, it is believed that the only way these targets can be met is through the use of a FTTN rollout style, which is significantly faster to deploy than Labor’s FTTP rollout style.

However, the new interim Statement of Expectations document issued by the two ministers to NBN Co yesterday does not contain specific speed goals as listed in the policy. Instead, it broadly informs NBN Co that it is to continue deploying the NBN under Labor’s existing model (FTTP, satellite and wireless), with the proviso that no new build orders for FTTP construction be issued without consultation with the new Government.

Additionally, it states: “Our policy provides NBN Co with flexibility and discretion in technology and network design decisions within the constraint of limited available public capital.”

In another statement yesterday associated with the launch of its revised interim statement of expectations, Turnbull and Cormann gave an example of how the Coalition’s new, more flexible approach, which differs markedly from its previously stated policy, could impact the NBN’s real-world rollout.

“The interim Statement provides NBN Co with the flexibility to use a wider range of technologies to connect businesses and homes to the network,” the pair said. “For example, this will allow NBN Co to trial the latest VDSL technology to deliver superfast broadband to homes and businesses in multi dwelling units such as apartment blocks.”

“A key priority will be to reduce the backlog of 66,000 premises passed by the NBN fibre network which cannot currently obtain service. This includes the majority of apartments, schools and businesses in areas where the fibre network has been rolled out.”

This approach could result in a so-called ‘patchwork’ effect with respect to the NBN, rather than a uniform rollout style. For example, in the case that the two ministers mention — apartment blocks already covered by, but not connected to, the NBN — it could result in a situation where houses on a street covered by the NBN’s fibre could receive NBN speeds up to 1Gbps through the NBN’s fibre, whereas apartment-dwellers on that same street would only receive NBN speeds up to 100Mbps, as in-building copper is re-used and fibre is run only to the building’s basement.

It is not yet clear how many of the current 900,000 premises listed on NBN Co’s website as receiving the NBN’s fibre in the next year will actually receive the infrastructure, with Turnbull stating yesterday that details about actual construction in those areas would be taken after the reviews into NBN Co’s model were completed.

“For me the key issue was that the review that he has announced is, in his own words, ‘not dogmatic’. He has first of all asked NBN Co to review its operations with the aim of coming up with changes that will see lower costs and a faster rollout within the current parameters of the project, this being mainly an FttH rollout,” wrote Budde in a blog post.