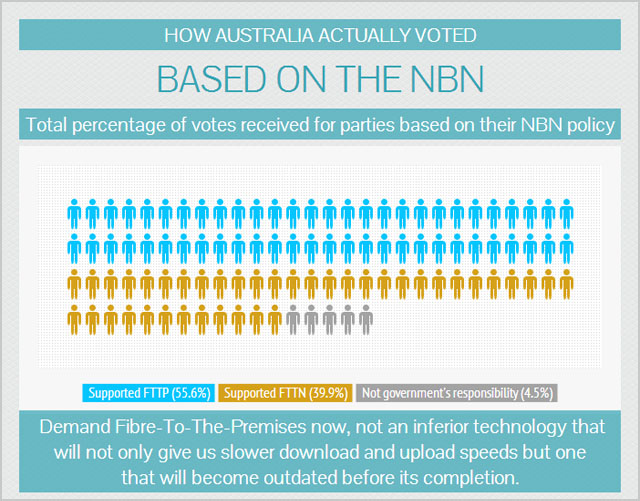 news An analysis of Senate voting patterns put together by supporters of Labor’s all-fibre NBN policy has shown parties supporting the fibre to the premises model received more support in the Federal Election than the Coalition’s alternative, calling into question Malcolm Turnbull’s claim to have a mandate to change the NBN rollout to fibre to the node.

Since the Coalition won power several weeks ago, a vigorous online movement focused on getting the new Abbott administration to abandon its own National Broadband Network policy and support Labor’s existing vision has been gaining force. Supporters of Labor’s vision argue that it will serve Australia’s long-term interests much better, as it features an all-fibre NBN, delivering a more reliable network and faster speeds.

The Coalition’s version of the NBN policy will see part of Telstra’s existing copper network maintained, in what is termed a ‘fibre to the node’ deployment. The model has been extensively and successfully deployed in countries such as the UK, but Australian proponents of Labor’s policy have highlighted the fact that it offers limited speed boosts over currently available broadband in Australia (up to 100Mbps as a top-end limit), compared with Labor’s NBN, which will offer enhanced levels of reliability and speeds up to 1Gbps, coupled with significantly enhanced upload speeds.

A petition placed on popular website Change.org on the issue following the election, demanding the Coalition reconsider the FTTN technology and focus on the superior FTTP option, has already garnered in excess of 250,000 signatures.

In addition, an online poll taken by the Australian Broadcasting Corporation last week showed Australians overwhelmingly believe focusing on the National Broadband Network should be Prime Minister-elect Tony Abbott’s highest priority in his first 100 days in office, eclipsing issues such as education, the carbon tax, border protection and the environment.

However, Communications Minister Malcolm Turnbull — formally sworn in to the role this morning — has rejected the online sentiment, saying that it would not be “democracy” for the Coalition to walk away from its fibre to the node-based NBN policy.

In the wake of Turnbull’s comments on the issue last week, a number of online critics of the Coalition’s NBN policy have put together and are promoting a comprehensive, data-based analysis of actual Senate voting patterns. It is believed that Senate votes give a better overall picture of which political parties Australians support, given the fact that very few parties run candidates in seats for the lower house.

Despite the low primary vote of primary NBN supporter Labor, the analysis shows that parties supporting a FTTP-based NBN received about 49.4 percent of the total vote. The list of parties supporting a FTTP-based NBN includes Labor, the Greens, the Nick Xenophon Group, the Australian Sex Party, Family First, the Democratic Labor Party, the Wikileaks Party, the Rise up Australia Party, the Pirate Party, the Democrats, the Socialist Alliance and others.

In comparison, those parties which supported a FTTN-based NBN, including the Liberal and National parties (including the LNP variant in Queensland and the Country Liberals, received only 39.9 percent of the total vote.

The analysis also lists a number of parties, such as the No Carbon Tax Climate Skeptics, which said the issue was not the Government’s responsibility (4.5 percent), those that supported Labor’s NBN policy but questioned its projected benefits, including the Palmer United Party and Katter’s Australian Party (6.2 percent) and parties which had no known policies or statements on the NBN (5.9 percent).

“Yes, the Coalition won the election. Labor’s NBN won it too, with an even larger margin,” the original author of the analysis, ‘quink’, wrote. “The petition never asked anyone to ignore the election result. Instead, we think you should honour it. Democracy? I think so.”

A Reddit user named ‘Geronimouse’, who created a more sophisticated graphic based on quink’s analysis, wrote that if the election had been based purely on Internet policies, “the LNP would have lost in a landslide”. They added: “Do not let the LNP force us to pay for inferior technology that will be ultimately more expensive.”

The news comes several days after Turnbull savagely attacked a University of Queensland lecturer for a seemingly innocuous article analysing rising online dissent towards the Coalition’s NBN policy, inaccurately labelling the academic’s article as “false” and “misleading”, and claiming that it was “a disgrace”.

Turnbull said the election did not close down debate on the NBN, and that Australians were “perfectly entitled” to urge him to abandon the Coalition’s NBN policy and take up Labor’s. “… but they should not take offence when we point out that we did take a very detailed NBN policy to the election, that we won the election and that were we to abandon it a week after that election Australians would thing we had taken leave both of our senses and our integrity,” the Member for Wentworth wrote.

opinion/analysis
What legitimacy does quink’s analysis have? It’s really quite impossible to know. Australians typically don’t vote for one party based on a single issue, even one as powerful as the NBN. Statistically, I’d say that experienced pollsters such as the ABC’s Antony Green would pour cold water all over this one. We just can’t simply posit that the NBN was as big an issue in the election as many people seem to think it was, merely because of these Senate voting figures. And I’m sure Turnbull would come back with this kind of line, should he be asked about the issue.

(I would have asked him about it today, but I believe his office is a tad busy getting established in Conroy’s old digs ;) I didn’t get much of a reply yesterday when I asked about TPG’s fibre to the building rollout. Plus, Turnbull was only sworn in this morning.)

However, neither can we discount this analysis entirely. If you look at the pro-FTTP parties which garnered most of the Senate primary vote, what you’ll see is that they are often very progressive parties. Certainly the Greens, Nick Xenophon, Wikileaks, the Pirate Party, the Democrats, Bullet Train for Australia, Drug Law Reform and the Future Party all fall within this description, and I’m sure Labor and the Socialist Alliance would like to believe they were progressive.

What this indicates is that there is a very large portion of Australians who voted for progressive parties in the election; parties which are likely to have technology-positive policies like the NBN. Even the Palmer United Party, usually seen as conservative, is broadly in favour of Labor’s NBN, although it broadly questions its benefits.

Then too, we don’t just have to rely on the election data in analysing the NBN’s popularity. The Federal Election is only a poll, after all, if a very sophisticated and binding one. A long-running series of other polls have consistently shown that a proportion of the population as high as 75 percent supports Labor’s original FTTP-based NBN policy. To the extent that you believe the NBN was an election issue, this analysis really isn’t anything out of line for long-term NBN polling. The truth is that all the evidence has consistently shown that the Australian population overwhelmingly supports Labor’s version of the NBN and has rejected the Coalition’s.