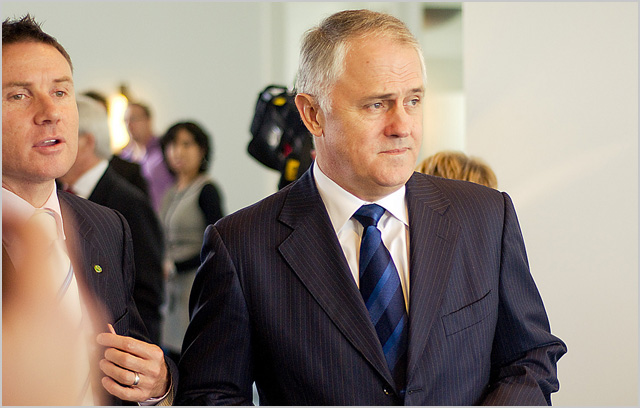 news Communications Minister-elect Malcolm Turnbull has savagely attacked a University of Queensland lecturer for a seemingly innocuous article analysing rising online dissent towards the Coalition’s NBN policy, inaccurately labelling the academic’s article as “false” and “misleading”, and claiming that it was “a disgrace”.

Since the Coalition won power in last week’s Federal Election, a vigorous online movement focused on getting the new Abbott administration to abandon its own National Broadband Network policy and support Labor’s existing vision has been gaining force. Supporters of Labor’s vision argue that it will serve Australia’s long-term interests much better, as it features an all-fibre NBN, delivering a more reliable network and faster speeds.

The Coalition’s version of the NBN policy will see part of Telstra’s existing copper network maintained, in what is termed a ‘fibre to the node’ deployment. The model has been extensively and successfully deployed in countries such as the UK, but proponents of Labor’s policy have highlighted the fact that it offers limited speed boosts over currently available broadband in Australia (up to 100Mbps as a top-end limit), compared with Labor’s NBN, which will offer enhanced levels of reliability and speeds up to 1Gbps, coupled with significantly enhanced upload speeds.

Industry experts have consistently stated that they believe Labor’s NBN policy to be highly technically superior to the Coalition’s more modest vision, and having the potential to deliver Australia superior long-term outcomes in terms of service delivery and boosting Australia’s economy through productivity gains. In addition, questions have been raised about the extent to whether it’s possible to deploy the FTTN technology the Coalition is focused on in Australia and whether it will perform as the Coalition has claimed.

A petition placed on popular website Change.org on the issue following the election, demanding the Coalition reconsider the FTTN technology and focus on the superior FTTP option, has already garnered in excess of 240,000 signatures, with tens of thousands more Australians putting their names to the issue every day.

In addition, an online poll taken by the Australian Broadcasting Corporation this week showed Australians overwhelmingly believe focusing on the National Broadband Network should be Prime Minister-elect Tony Abbott’s highest priority in his first 100 days in office, eclipsing issues such as education, the carbon tax, border protection and the environment.

However, in a statement posted on his website last week, Turnbull rejected the Change.org petition. “The promoters of this petition apparently believe that we should ignore the lengthy public debate on the NBN that preceded the election and also ignore the election result,” said Turnbull. “We should within days of the election walk away from one of our most well debated, well understood and prominent policies. Democracy? I don’t think so.”

Turnbull’s statement was immediately met by criticism by a number of online commentators.

In a post on The Conversation, University of Queensland communications lecturer Sean Rintel pointed out that furore had erupted on social media following Turnbull’s response and that the community was rejecting Turnbull’s stance on the issue. And opinionated online commentator and IT professional Kieran Cummings, who has consistently been a fierce critic of Turnbull and the Coalition’s NBN policy, accused the Liberal MP of “hypocrisy” on the issue, given that he had supported similar petitions in the past on other issues.

In response, Turnbull once again today went on the attack, publishing a statement yesterday rejecting the criticism which had been levelled at him.

The Member for Wentworth first attacked Rintel, who he accused of “misrepresentation” of Turnbull’s view. “His first misrepresentation is in the first paragraph where he writes that social media users “are mobilising against … Malcolm Turnbull’s claim that “democracy has spoken” on the issue of the NBN”,” wrote Turnbull. “I am not sure what the University of Queensland means by “Strategic” Communications, but I doubt they mean “false” or “misleading”.”

“Rintel put the phrase “democracy has spoken” in quotes intending no doubt to create the impression I had written those words – but I had done no such thing. Had he left the quotes out, readers may have simply assumed he was paraphrasing (in his own view) my remarks. But the use of the quotes deliberately sought to create a false impression, that the words in quotes had been written by me.”

“But then he goes on to refer to a blog post on this site in which I “also appeared to dismiss democratic debate outside of elections.” Nobody who read that blog post could have honestly or rationally come to that conclusion. Indeed I described the strategic review and cost benefit analysis of the project and the technologies available to complete as being “vital for the public to be fully informed”. Far from dismissing debate outside of elections I concluded by writing: ‘The NBN debate is not over – but I am determined  to ensure that from now on it is at least fully informed.'”

Turnbull said Rintel’s comments “would disgrace any of his students”.

“He deliberately sets out to create a false and misleading impression about my comments, putting words into my mouth I have not said and attributing to me a view as to the role of public debate entirely at odds with the express words of my own blog on the matter,” said Turnbull.

“Far from ignoring or rejecting the petition I have responded to it. I have also had a discussion with Nick Paine the instigator of the petition. He asked me a number of questions about our policy. I answered them and referred him to our policy documents and FAQs on my website which I encourage him and others interested in the issue to read. I have discussed our policy in numerous forums – in the media, at public meetings, on the web.”

Turnbull said the election did not close down debate on the NBN, and that Australians were “perfectly entitled” to urge him to abandon the Coalition’s NBN policy and take up Labor’s.

“… but they should not take offence when we point out that we did take a very detailed NBN policy to the election, that we won the election and that were we to abandon it a week after that election Australians would thing we had taken leave both of our senses and our integrity,” the Member for Wentworth wrote.

Turnbull claimed that “far too few people have ever taken the time to read” the Coalition’s NBN policy.

“As I have said many times, I believe our policy should be technology agnostic. There is no doubt that if time and money were irrelevant we would run fibre into every premises. But not even the Labor policy proposed to do that. The question of technology choice depends on many factors but notably the time and cost of deployment, the relative service levels attainable and level of demand for particular service levels.”

“In a recent call with a leading European telco, for example, executives described how with FTTN (vectored VDSL) they could offer 100 mbps down 40 mbps up for between one fifth and one sixth of the cost of deploying FTTP. It could also be rolled out in a fraction of the time. So, they have made a call to do a great deal more FTTN and much less FTTP. The strategic review will consider all those matters – openly and honestly. No spin. No politics. Just hard facts. And that will make the debate much better informed.”

opinion/analysis
Frankly, I really have no idea why Turnbull, who is about to become the bloody Communications Minister, and take charge of the entire communications portfolio for the Federal Government, to say nothing of the NBN itself, is lowering himself to waste his time debating NBN policy on social media. And I certainly have no idea why the Viscount of Vaucluse has wasted time publishing an entire statement rebutting Sean Rintel’s eminently sensible and level-headed article discussing the online dissent against the Coalition’s NBN policy.

Ministers usually don’t bother doing such things … and I cannot understand why someone ascending to that position would sully their first couple of weeks in power with such nonsense.

Is Turnbull really silly enough to believe that he can convince anyone that the Coalition’s NBN policy is the right one, or that it is listening to the public on this issue, merely because he’s publishing statement after statement responding to the pro-NBN online activism movement? Does the man who would be Prime Minister really not realise that he is just fanning the flames here; that he’s handing his critics fuel to pour on the fire?

At this stage, after years of NBN debate, pretty much everyone knows what the Coalition is planning to do with the NBN. Most of Australia is against that path. And everybody realises that the Coalition isn’t going to back down from the policy stance it took to the election. Nothing Turnbull can say will change anyone’s mind on anything here.

The only thing that will is the Member for Wentworth shutting up and getting on with the job. As soon as Australians start getting better broadband, much of the impetus and urgency for the online activism will drop away (although, as I have previously written, much of the community will then start agitating for the Coalition’s FTTN network to be upgraded to FTTP). This is the only thing which matters at this point: Getting the job done.

To me, what Turnbull’s verbosity at the moment represents is a certain level of immaturity which I am surprised to see from the Duke of Double Bay. You’ve just taken power, for God’s sake, Malcolm. Stop campaigning and start governing: It’s what your constituents elected you to do. You’re a fracking Minister now, or you will be in a few days. Your policy is not the best, but it’s not terrible either. Stop obsessing about Twitter and prove your own policy works. Because you’ve only got a limited amount of time to do so, before journalists like myself feed you to the sharks.

Addressing Turnbull’s claim that Rintel had misrepresented him … well, it’s clear that the gross context of what Rintel said was accurate. Turnbull did brush off the online criticism of the Coalition’s NBN policy, and refer to the fact that it wouldn’t be “democracy” for the Coalition to revisit the policy immediately after the election. Rintel did err textually in the way he quoted Turnbull — but it was a minor error. He could have resolved the error by merely using single quotes instead of double quotes around the comment he had attributed to Turnbull: Writing ‘democracy has spoken’ instead of “democracy has spoken”. This would have indicated a paraphrase instead of a direct quote. But the overall meaning would still the same; Turnbull is really picking at minor points here.

Turnbull’s model, right now, should be drawn from that old favourite of his, Francis Urquhart. The Baron of Bellevue needs to stop wasting valuable mental energy on his online critics and become familiar with the response: “They may very well think that, but I couldn’t possible comment …”