news The National Broadband Network Company over the weekend updated its rolling three-year deployment timetable, adding more than 1.35 million Australian premises to its plan for deploying fibre, wireless and satellite infrastructure throughout Australia.

The company last updated its three-year rollout plan in March 2012. At the time, it said its rollout was slated to hit some 3.5 million premises in 1500 communities in every state and territory in Australia. However the company has acknowledged it is three months behind schedule in reaching that mark; at the end of March it had passed only 70,000 fibre premises.

In a statement released yesterday associated with a press conference held in Western Sydney by Communications Minister Stephen Conroy, the company noted that more than 1.35 million premises had now been added to the rollout in the updated three-year plan. The plan adds almost 190 new towns and groups of suburbs, as well as more homes and businesses in areas covered by the previous plan. This brings to 4.85 million the number of premises that will have construction commenced or where services are scheduled to be ordered by June 2016.

NBN Co CEO Mike Quigley said: “We’re getting on with the job of rolling out the NBN in every state and territory. Our plan is to deliver better broadband to every Australian over the remaining 8 years of this 10-year build.”

NBN Co added that a growing number of Australians were already beginning to experience the benefits of high speed broadband. In areas where the fibre network has been up and running for more than 12 months, around a third of eligible families have already purchased an NBN package.

“Furthermore, a third of people with an NBN fibre connection have subscribed to the fastest speeds available. And households in the NBN fibre footprint are downloading around 50% more data than the average Australian broadband user every month,” said Quigley. “The NBN enables the whole family to go online without the internet slowing down. People can work from home as if they are in the office and make video calls to family and friends reliably. What’s more, the price of NBN packages is competitive, and NBN Co has made an ongoing commitment to reduce the wholesale cost of broadband in real terms.”

The news was released to coincide with an event in the Western Sydney suburb of Blacktown, where Conroy and several Labor MPs — Michelle Rowland and Ed Husic — officially switched on the first NBN fibre services in the area. To showcase the benefits of the NBN, local school students took part in a virtual book reading with children’s author Andy Griffiths.

“Today’s reading lesson is another example of the possibilities for education offered by the Gillard Government’s world class National Broadband Network,” Senator Conroy said. “Through the NBN, location will no longer be a barrier to getting access to a great education.”

“Having NBN services available in Blacktown is great news for local families,” Rowland said.
“Around 1,300 homes and businesses can now connect in Blacktown, with another 9,300 homes and business to come online over the next few months.” Husic added: “The NBN opens up huge opportunities for our children, giving students and teachers the ability to explore new and engaging experiences through the use of internet-based learning in the classroom. I urge everyone who can access the NBN to sign-up so they can experience what the NBN has to offer.”

In a separate statement, Conroy heavily criticised the Coalition’s rival NBN policy, which shares a number of features with Labor’s NBN policy, but broadly would focus on fibre to the node-based infrastructure, replacing only part of Telstra’s existing copper network, rather than replacing the entire network with fibre, as under Labor’s NBN.

“The only risk to Labor’s NBN is Tony Abbott. Under Tony Abbott, households across the country will have their planned connection cancelled and be forced to pay up to $5,000 or be left disconnected from Labor’s NBN,” said Conroy, referring to the fact that the Coalition has proposed a user pays system which would allow those desiring fibre all the way to their premises to pay for extensions.

“There are already over 50,000 Australians using the NBN today, with NBN fibre construction commenced or complete for almost 1 million homes, businesses, schools and hospitals in over 80 communities across the country. By 30 June 2016, 4.8 million homes, business, schools and hospitals will see construction commence or be complete.”

“Our internet needs are growing and we simply can’t rely on the ageing copper network that was designed for telephones, not high-speed broadband. By the time today’s Year 7 students finish high school, their household’s internet needs will have increased six-fold – we need the NBN to meet our needs now and into the future. The NBN will transform the delivery of services across education, health care, aged care and allow us to harness our full potential as a digital economy.”

“Under Labor’s NBN everyone will be connected at no connection cost and NBN Co’s prices in the city, suburbs or regions will be the same. The Coalition’s plan would mean people in the regions are forced to pay more for their broadband than those in the city.”

The new suburbs outlined yesterday under NBN Co’s 2016 rollout plan are as follows: 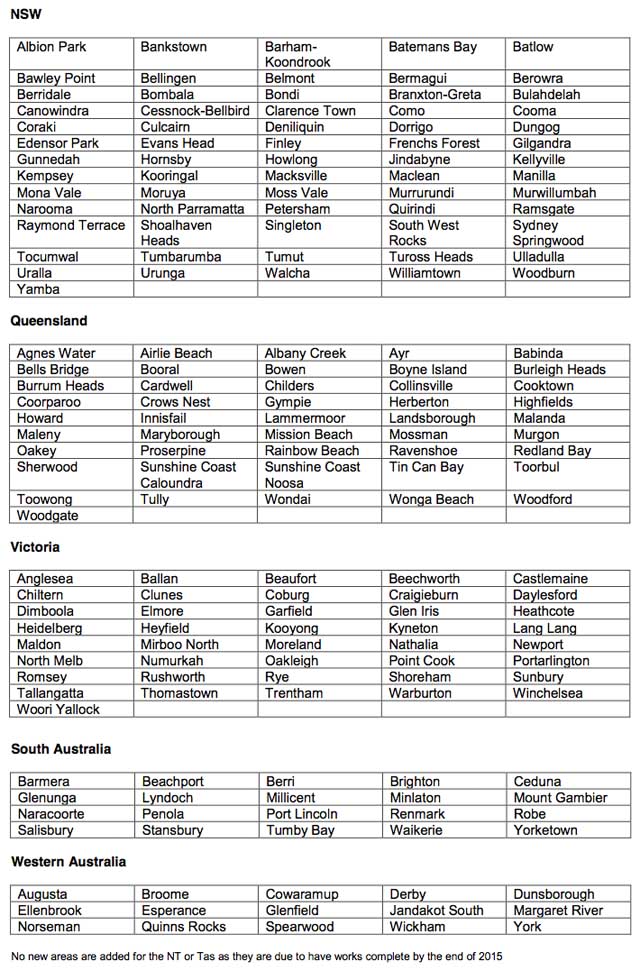