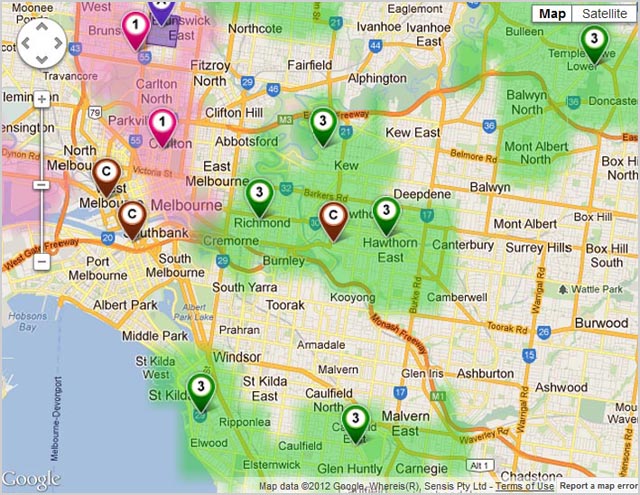 news Shadow Communications Minister Malcolm Turnbull has issued a statement poking fun at what he sees as the slow rollout speeds of Labor’s flagship National Broadband Network project, joking that the Government was more active in publishing future rollout maps for the network than actually rolling out the network itself.

In a Senate Estimates session this week, NBN Co executives noted that some 6,400 premises were now connected to NBN Co’s fibre network, and 24,000 to all three NBN networks – including the separate satellite and wireless networks. About 17,000 of those were using NBN Co’s interim satellite service, with about 9,000 transferred from the previous Coalition Government’s Australian Broadband Guarantee program. However, simultaneously, the Government and NBN Co have recently released new construction maps which give Australians an idea of which areas the NBN will reach over the next several years.

“Living or working in a premise situated within one of Labor’s NBN construction maps is a privilege for any Australian,” said Turnbull, in what appeared to be a tongue in cheek statement. “As long as people don’t mistakenly assume this means they are likely to receive improved broadband any time soon, they should savour what it means to be included on an NBN construction map.”

Coalition Senator Simon Birmingham – a long-time adversary of Communications Minister Stephen Conroy in the NBN Senate Estimates hearings – said that it was “fair to say” that Conroy had impressed senators attending the hearings with “his commitment to construction map inclusiveness”. “In particular I expect Australians in marginal seats can look forward to finding themselves on a construction map soon, if they are not already,” Birmingham added.

Turnbull and Birmingham said that Australians who learnt that their home or business was on an NBN Co construction map could be assured of many benefits, such as being able to go to the NBN Co website and “verify that they live in an area covered by a green splotch”, being able to repeatedly enjoy “high-quality television and print media advertising commissioned by NBN Co’s marketing department and paid for by taxpayers” and receiving “the finest personal service”, given that, according to the Coalition, NBN Co currently had one employee for every 15 paying customers.

In addition, the two Liberal parliamentarians said, those Australians within construction zones could look forward to Conroy publicising the name of their town and suburb “on every media outlet that will have him on”.

“Labor’s NBN has clearly achieved world’s best practice in the presentation and promotion of rollout construction maps,” said Turnbull. “But let’s not overlook NBN Co’s many other marketing achievements.”
“Australians who live in areas covered by a construction map can be confident NBN Co has painted (or soon will paint) a line on a road somewhere in their town or suburb – or at very least, that NBN Co’s engineers have created a virtual 3D computer design of a line on a road,” the pair’s statement read. “Unfortunately, they will not be able to access the internet faster. Nor will they see the NBN for at least a year (and judging by the pace of the rollout so far it will be longer, in most cases).”

“For the millions of Australians who want faster and more reliable broadband at affordable prices, inclusion on a Labor NBN construction map will not be sufficient. They will have to wait until a change of government.”

NBN Co is currently ramping up its fibre network rollout, and plans to have rolled its fibre past some 286,000 premises by mid-2013, with an estimated 44,000 customers actively using the fibre network, and additional totals for the satellite, wireless and fibre greenfields zones. However, the company has come under constant criticism from the Coalition and some elements of the media with respect to its rollout speeds. It has acknowledged it is six months behind schedule, due to a variety of factors, including lengthy negotiations with Telstra over access to the company’s infrastructure. The Coalition believes it can roll out a national fibre to the node-style network much faster than the current fibre to the home deployment.

Turnbull is correct that Conroy and other senior Labor figures have regularly used the launch of new construction maps or early stage rollouts around Australia to heavily promote the NBN to local residents and businesses. Often such occasions will entail Conroy visiting an area and launching the NBN in that region, accompanied by a local Labor politician.

opinion/analysis
Look, I’m as cynical as the next man about the Coalition’s rival fibre to the node-based NBN policy, but Turnbull and Birmingham have a point here (and very amusingly made). Usually I get a media release or five per week at the moment from Conroy’s office about some new NBN rollout activity somewhere in Australia, and while it is true that such activity is ongoing, that doesn’t mean that actual Australians have actually been connected to the NBN’s fibre network. It’s not information: It’s propaganda.

The NBN is right now entering its rapid deployment phase; we should start to see a really fast ramp-up of the network rollout over the next few months, which will continue in a sustained fashion for several years. But right now, most of that activity is hard to quantify; until the number of actual connections NBN Co can boast also starts to rise, the Coalition has a window to continue to criticise the company for poor performance, based on its own measurements.

There’s not much that NBN Co and Conroy can really do about this, apart from to buckle down and get on with the job, which I very much hope they are doing. Because every little delay from here will continue to play into the Coalition’s hands.