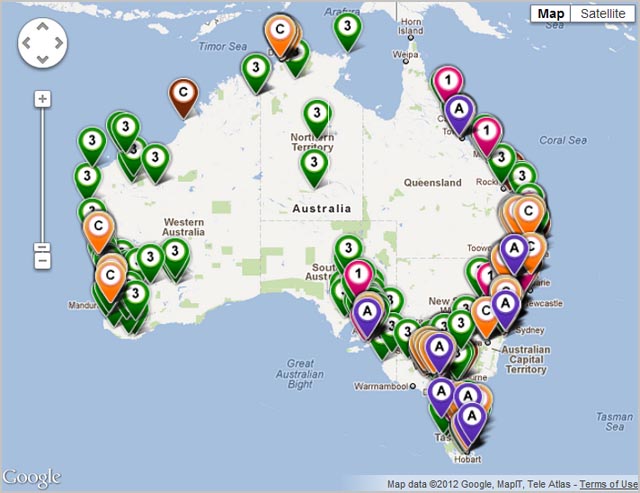 news The National Broadband Network company today released a detailed plan of the locations and schedule where it plans to deploy fibre and wireless broadband infrastructure over the next three years, noting that the rollout was slated to hit some 3.5 million premises in 1500 communities in every state and territory in Australia.

The list of locations is available online through an interactive map, and those interested to find out when their geography will be connected can type in their location or postcode to check what the progress is in their area.

In addition, NBN Co has set a rule that when it has started construction of its network in a certain area, it will complete coverage in that area before moving on to another area. In this sense, it defines areas as ‘fibre serving areas’ of about 3,000 premises per area.

There are currently 750,000 premises where construction is under way or slated to start this year, and eight early locations where the fibre network is already operating. NBN Co also plans to update its rollout schedule once a year, outlining the next series of areas where construction was slated to start. The entire project is expected to take about a decade to complete, and on average, it is estimated to take about 12 months from the release of NBN Co maps of a location, to the time when Australians in that area will be able to order retail NBN services.

In a statement, NBN Co chief executive Mike Quigley described the release of the plans as “a significant day for Australia’s digital future”.

“Construction contracts are in place and the major commercial and regulatory hurdles have been cleared, giving us the momentum we need to deliver better broadband to every Australian, no matter where they live,” he said.

Some examples of the rollout maps: