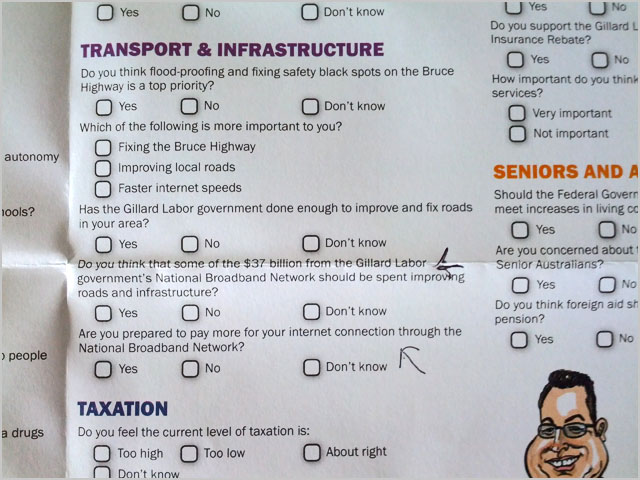 news A North Queensland LNP Member of Federal Parliament has issued his constituents with a wide-ranging survey canvassing their views on a number of areas, including several questions which appear to take a misleading approach regarding the Government’s National Broadband Network project.

In the letter to residents in the electorate of Dawson, seen by Delimiter, the MP for the area, LNP member George Christensen, described the survey as “North Queensland’s biggest survey” and said it would enable every household to express views on a wide range of issues. “The results of this survey will be used by me to fight for things that need to be done,” he added.

However, in the ‘Transport & Infrastructure’ section of the survey (pictured above), Christensen’s questions to Dawson residents appeared to contain several misleading implications regarding the NBN. For example, the survey contains a question asking residents which of the following answers were more important to them, but gave them only three options: Fixing the Bruce Highway, improving local roads, or faster internet speeds.

Christensen’s questions reflect what increasingly appears to be a common misconception by Coalition MPs that the NBN’s capital funding could be re-allocated to infrastructure.

Opposition Leader Tony Abbott, for example, used his 2011 budget reply speech to describe Labor’s plan to invest billions of dollars of equity funding in its flagship National Broadband Network project as “reckless”, and claiming that the capital could be re-allocated to fund a number of major transport infrastructure and hospital projects. And in July 2012, Abbott proclaimed that Australia didn’t “need” the National Broadband Network project and the billions being invested in the initiative would be better spent on “our roads, our rail and our ports” under a Coalition Government.

However, analysis has consistently shown that the NBN is not an expense in terms of the Federal Government’s annual budget, and cutting the project would not free up money to be spent in other areas. This is because the project is an investment expected to make a return for the government — a long-term profit of 7.1 percent.

According to a research note published by the Parliamentary Library of Australia, Labor is technically correct to account for the NBN on this matter, and the Coalition is wrong.
“Australia has adopted internationally accepted accounting standards, and these are applied in the budget treatment of the NBN,” the library’s Brian Dalzell, who works in its economics division, wrote in the report (available online here in PDF format). “While the applied accounting treatment depends on the specific transaction conducted between the Government and NBN Co, this treatment is governed by accepted accounting standards and is applied equally to all government business entities (GBEs). This treatment is not determined by the return generated by NBN Co (or any other GBE).”

In this sense, cutting funds from the NBN would have the potential to limit any return the project makes in the long-term, potentially even costing the Government money instead of saving it. Even if the NBN project ended up making a long-term loss on the investment, the Government’s loss in that area would not constitute the entire cost of the project — merely how much money it had lost once NBN Co’s revenues had been removed from the equation. In this sense, it is not possible to take the funding which has been allocated to the NBN and use it instead on transport infrastructure. The net cost to the Government from such an initiative would be expected in the long-term to be worse than if such funding had been independently sourced for the transport infrastructure.

Similarly, Christensen’s implication that end user retail costs will be higher under the NBN has also been demonstrated to be false.

The Coalition has publicly stated its opinion that broadband prices will be higher under the NBN than the current ADSL-dominated broadband market repeatedly over the past six months. In September, Liberal MP Paul Fletcher stated that new NBN pricing released by iiNet at the time was higher than existing ADSL prices. And several months earlier, Turnbull stated that early pricing released by Internode for services on the NBN demonstrated the project would drive consumer broadband prices higher.

However, unfortunately the Coalition’s statements on this matter have been factually incorrect. Almost all of Australia’s major ISPs have released their first tranche of NBN pricing plans, and in almost all cases, the prices are directly comparable to current pricing available over Telstra’s copper network (ADSL) or the HFC cable networks operated by Telstra and Optus.

It’s not the first time Christensen has sharply criticised the NBN project. In September 2011, for example, the MP issued an extensive statement slamming the NBN project as a “white elephant in the making”.

One of the chief criticisms which Christensen raised with respect to the NBN was the issue broadband blackspots, linking what he said was the Government’s failure to improve mobile coverage in his electorate to the recent death of a young teenager at a swimming hole near the area of Alligator Creek.

“Che-Nezce Perrie Shepherd was just 17 when her foot became wedged between rocks in the creek,” wrote Christensen. “A freak surge of water resulting from an exceptionally heavy downpour rapidly rose and her friends, unable to free here, tried to call for help on mobile phones. This popular swimming hole is in a black spot and her friends were unable to raise the alarm. Che-Nezce drowned in her friends arms.”

“I have raised this specific issue in this place before and I am pleased to say that since then the community support has prompted Telstra to address this particular black spot – with no thanks to the government. The government can roll out billions of dollars of NBN but that NBN will do nothing to prevent tragedies like this occurring. Every day, in less tragic ways, black spots in our communication network hinder businesses and the lifestyles of everyday people in regional and remote areas. Businesses in Townsville don’t need the NBN. They need mobile phones that work.
These are the issues that should have been covered by a report before any alleged solution is rolled out.”

However, the Coalition has not proposed any broadband or mobile telephony policy which would address the issues which Christensen raised regarding mobile phone coverage in his electorate.

Christensen’s comments also come as other LNP Queensland MPs have recently been attempting to canvass support in their electorate for the Coalition’s rival NBN policy, which uses fibre to the node technology. However, as with Christensen’s survey, the statements issued by two LNP MPs in this area were somewhat misleading; criticising the Government for not rolling out the NBN’s fibre infrastructure in some parts of their electorate fast enough, while not acknowledging that the infrastructure was currently being rolled out in other areas.

opinion/analysis
Honestly, I am very surprised to see Coalition MPs still peddling these common NBN misconceptions to their electorate. Delimiter and other sites have debunked this nonsense so many times … it is quite disappointing to see that some Coalition MPs repeatedly refused to separate fact from fiction in their communication with their constituents. I am particularly disappointed to see this kind of loaded survey questions being used; surely anyone who has ever been involved in survey work before could see that these are leading questions which would not give an accurate picture of people’s views of the NBN.

Our thanks to the anonymous tipster who sent Christensen’s survey to us.